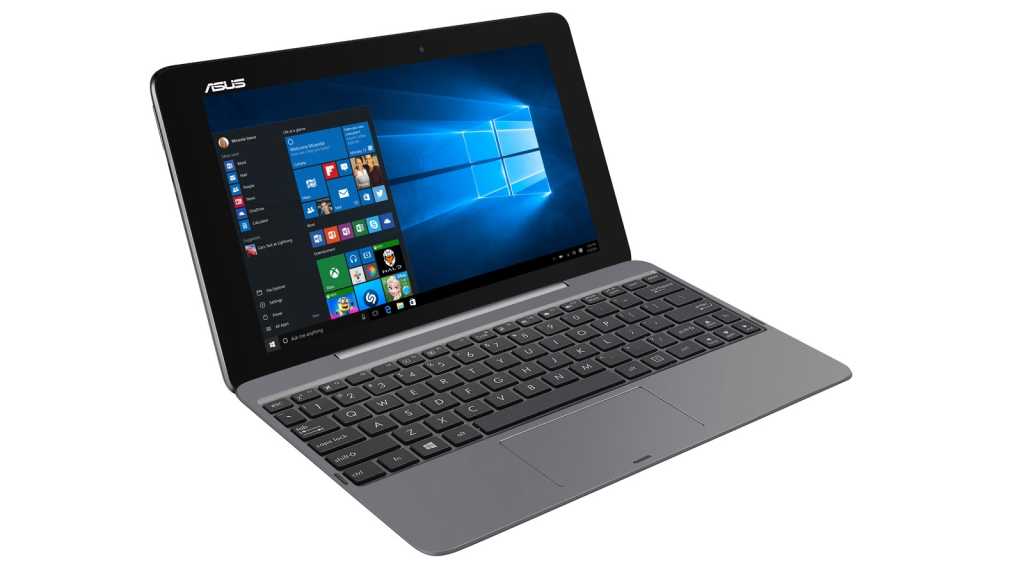 The new processor is as slow as before but increased economy let it provide a further hour of tortoise operation. Windows is no more compelling on a tablet than it was with previous Transformers, leaving us a slow and unreliable 10in laptop, weighing little over a kilo and with a pretty IPS screen.

The Transformer T100HA is a Windows tablet much like the Microsoft Surface 3, but it comes with a keyboard and costs considerably less. Also see: Best new tablets coming in 2016.

Asus has been making ‘transformer’ devices as it calls them for several years. The story of the T100HA is similar to the T100 Chi incarnation we reviewed last June – a budget 10in Windows tablet with click-on keyboard that turns it into something like a laptop. The keys are exceptionally small, making typing difficult.

Originally the T100HA cost £349, but retailers were quick to discount from the RRP. Argos is currently selling the blue T100HA for £249.99. You can buy the grey version of the T100HA from Amazon for the same price.

Don’t be fooled by the advertising. ‘Outstanding Performance… powered by the latest quad-core Intel Cherry Trail processor, so it not only breezes through everyday tasks, it also delivers faster-than-ever graphics – up to twice as fast as previous generations.’

The previous Chi managed 18fps in Batman at lowest detail and limited 1280×720 resolution. This T100HA instead averaged 19fps, leaving it equally useless for action gaming, not that gaming is likely to be a priority with such a device.

To give it usable battery life in Windows, an underpowered processor is fitted, the Intel Atom x5-Z8500. This new 1.44GHz chip is quad-core, backed with 2GB memory. In Geekbench it proved faster than an iPhone 5s, multi-core; but far slower in more typical single-core operation (3095 vs 2532 points; and 948 vs 1406 points).

PCMark reported a better score than previous version, rising from a desultory 1223 points in Home unit, to 1338. Any score below 2000 points is cause for concern.

Battery runtime was better than most Windows laptops – 11 hr 38 min in the Wi-Fi video test. But should it run flat it’ll take about as long to recharge. From a flat battery, it took 45 mins before it would even start. And thereafter around 12 hours to reach full charge.

Like all convertibles, the T100HA is hamstrung as a laptop, and poorly balanced thanks to the rearward mass of the tablet screen. The inkling to fit a touchscreen overrode the necessity of readability, and again the screen is too reflective. Screen rake has some adjustment though.

For storage it uses an eMMC card, as fitted to phones, rather than a laptop SATA drive. It’s a sluggish solution, and in our testing we found the Asus terminally slow in daily tasks. One time it took six or seven clicks of the File Explorer icon to launch. Thirty seconds later, six windows opened at once. Another time we disovered a new Windows message not encountered before – ‘working on it…’ – to at least let us know something was ticking under the bonnet.

Asus has addressed one deal-breaker fault from before, Bluetooth to connect tablet and keyboard. The T100HA has electrical connection in the hinge, so you’re not left waiting for re-pairs each time you type. There’s no hassle to recharge the battery-less keyboard either.

We did find problems with the fiddly power button. It once failed to boot up with USB power attached, despite a full battery. Pulling the power fixed this.

Another problem was a frozen cursor from dead trackpad. A complete reboot fixed this. We also noticed while sat on the desk like a laptop, it could spontaneously switch the screen into sideways portrait mode.