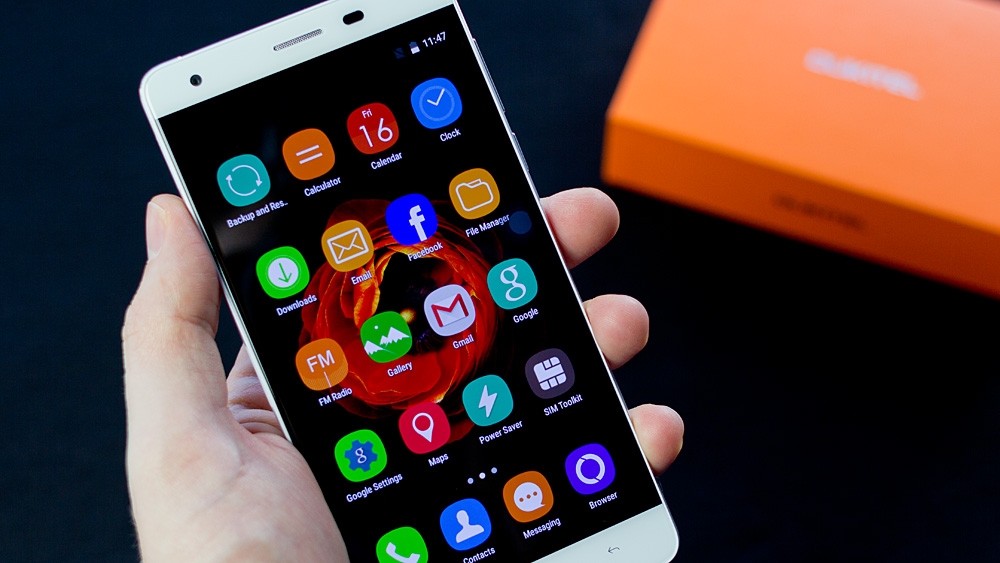 The Oukitel K6000 is big and heavy, which is necessary to support the massive 6000mAh battery that’s large enough to fully charge a second phone. Battery life has been kept in mind throughout the entire design process, which means performance is nothing to shout about. But if you need a large-screen phone that keeps on going and going then the Oukitel K6000 offers great value.

Oukitel’s K6000 is a budget Android phone with a mammoth 6000mAh battery. Is it worth your money? We find out in our Oukitel K6000 review. Also see: Best budget smartphones

The Oukitel K6000 is a Chinese phone that’s available from various third-party vendors including Coolicool, where it costs £88.39. Coolicool offers free shipping, but bear in mind that when buying a phone from China you will have to pay import duty if it is picked up at UK customs. There are also other factors to consider, such as the ease with which you can return the device for a refund should something go wrong. We’ve considered some of these in our article on buying grey-market tech.

We’ve had only good experiences with these sites, and if you’re prepared to buy from China you will find you get much more for your money than you would in the UK. Also note that the Oukitel K6000 comes network-unlocked (SIM-free), and supports all three UK 4G LTE bands (3, 7 and 20). Also see: Best Android phones

Understandably it feels bigger and heavier in the hand than do most Android smartphones, and we did notice its addition to a bag. But if you make heavy use of your smartphone, or would benefit from its OTG functionality (and bundled adaptor) that allows you to hook it up to and charge another smartphone, whether it’s big and heavy will make little difference to you. If you’re tired of having to stay close to a mains power point or carry with you a portable power bank, the Oukitel K6000 could well be the phone for you.

Oukitel claims 10 days battery life with normal usage, although it’s difficult to determine exactly what is ‘normal’ usage. Everybody uses their phones differently. But to put it into context, the Oukitel has at least double the battery capacity of most Android phones, and with some low-power hardware and an HD screen resolution, you should squeeze more than double the battery life from it.

What’s more, the Oukitel supports fast-charging, so it isn’t going to take you twice as long to recharge the battery. Oukitel says you’ll get two hours of talk time from a five-minute charge. Also see: Best MiFi 2016.

Getting past the sheer bulk of this phone, the Oukitel K6000 has a nice design. It’s built around a silver metal frame, with white plastic bars at the top and bottom on the rear. Built into the bottom panel is a rear-facing speaker grille, so don’t expect the best audio experience from this smartphone, and at the top an 8Mp camera with dual-LED flash. Also see: Best smartphones

A slot-loading SIM tray sits at the top-left edge of the phone and will accept two Micro-SIM cards or one SIM and a microSD card (up to 32GB in capacity), allowing you to boost the Oukitel’s 16GB of internal storage. Even without the microSD card that’s a fairly generous amount of storage for an Android smartphone that costs less than £100 – in many cases you’d find yourself with only half this amount.

A volume rocker and power switch are found on the phone’s right side, where you’d expect, while there’s a Micro-USB charging port at the bottom and 3.5mm headphone jack at the top. The screen-to-body ratio is reasonably high, although there is some space below the screen for three touch-sensitive recents, home and back buttons.

Speaking of the screen it’s usefully large at 5.5in, making this Oukitel K6000 a ‘phablet’ device, and uses IPS technology which is known for its realistic colours and strong viewing angles. It’s sufficiently bright in the scenarios we tried, and Oukitel has added 2.5D curved glass to the top that helps make the phone feel more comfortable in the hand.

The K6000’s screen has 1280×720 pixels, which is an HD resolution and in line with many budget Android phones. You will find full-HD screens at this price point, but keeping in mind that phone screens tend to place one of the largest drains on battery life it makes sense for Oukitel to stick with HD. Most users will find HD just fine, too – despite having a lower pixel density than many of its rivals at 267ppi, the K6000’s screen is quite adequate for watching video and viewing photos. See all smartphone reviews

Although this is a budget smartphone, it’s clear that Oukitel had long battery life in mind throughout its design, right down to the hardware inside. While many of its rivals are specifying octa-core chips the MediaTek MTK6735P is a quad-core processor clocked at only 1GHz. The K6000 also has 2GB of RAM and ARM Mali-T720 MP2 400MHz graphics.

It’s capable enough for day-to-day use, and will launch most apps reasonably quickly (the camera, for example, will take a few seconds to spring into life), but the Oukitel K6000 is by no means a speedster.

We ran the Oukitel K6000 through our usual benchmarks and saw some not particularly impressive performance results in line with the likes of the cheaper UMI Fair and Vodafone Smart Speed 6.

In Geekbench 3 we recorded 1336 points in the multi-core component, and 481 single-core. And in AnTuTu, also used to test overall performance, the Oukitel clocked up 24,707 points.

In SunSpider (tested in Chrome for a fair comparison) the Oukitel recorded a lowly 1768ms (lower is better in this test), and in our GFXBench graphics tests just 8fps in T-Rex and 4fps in Manhattan.

While the Oukitel K6000 will cope with most tasks you throw at it, it will more than likely start to struggle when you throw them all at it at once. You can compare the Oukitel’s performance to all the phones we’ve recently tested in our article what’s the fastest smartphone?

We’ve already mentioned the K6000’s OTG facility that lets you use it to charge another phone. You could also use OTG to plug in a camera, hard drive or other USB-connected device.

And we briefly touched on its dual-SIM functionality. The Oukitel K6000 is a good choice if you want to manage two phone numbers from one smartphone, with dual-SIM dual-standby capacility. For more on what this means check out our dual-SIM phones group test and buying advice.

This dual-SIM functionality is one of the perks of buying a phone from China; another is that unike the aforementioned Vodafone Smart Speed 6 it is network-unlocked (or SIM-free). You must be careful when buying a phone from abroad that it will work on your operator’s network, and you can read our advice on how to tell whether a phone is supported by your network.

In terms of connectivity the Oukitel K6000 is otherwise a standard budget Android, with support for 802.11b/g/n 2.4GHz Wi-Fi, Bluetooth 4.0 and GPS. There’s no NFC but there is HotKnot, which is MediaTek’s ‘sort-of’ equivalent and works only with other HotKnot devices.

The Oukitel K6000 is fitted with an 8Mp camera at the rear that uses software to boost to 13Mp; likewise, at the front there’s a 2Mp camera that boosts to 5Mp. Oukitel has specified a dual-LED flash, and the primary camera can also shoot 1080p video.

The camera app is reasonably basic, with the usual shooting modes and options for turning on voice capture, face detection, smile shot, boost mode and the like.

Our test shots were acceptable for a budget camera, but detail is lacking. HDR mode is useful for tackling problem areas where the photos are overexposed, but can result in slightly cold images.

You can see our test shot without HDR and then with HDR below. Also see: Best phone camera 2016

The Oukitel K6000 runs on a modified version of Android 5.1 Lollipop. The most obvious change is that there is no app tray – all the app shortcuts sit on one of three home screens, in a much more iOS-like setup. The icons are also rounded and some of the images are different – it might take you a little while to get used to the new icons for the Google Play store and the like.

The K6000 also supports customisable Smart Wake gestures, such as the ability to draw the letter C on the screen in standby to open contacts (or the camera or any other app you like). Other gestures include the ability to take three-finger screenshots, adjust the volume, launch the camera and more.

A Float Gesture is also supported that places a small grey circle anywhere you like onscreen. When you tap and hold it you can find quick-access options including Game mode, which locks the menu and back keys while you’re playing games, a lock screen option, options to pop up video or music onscreen, a read mode and a task killer.