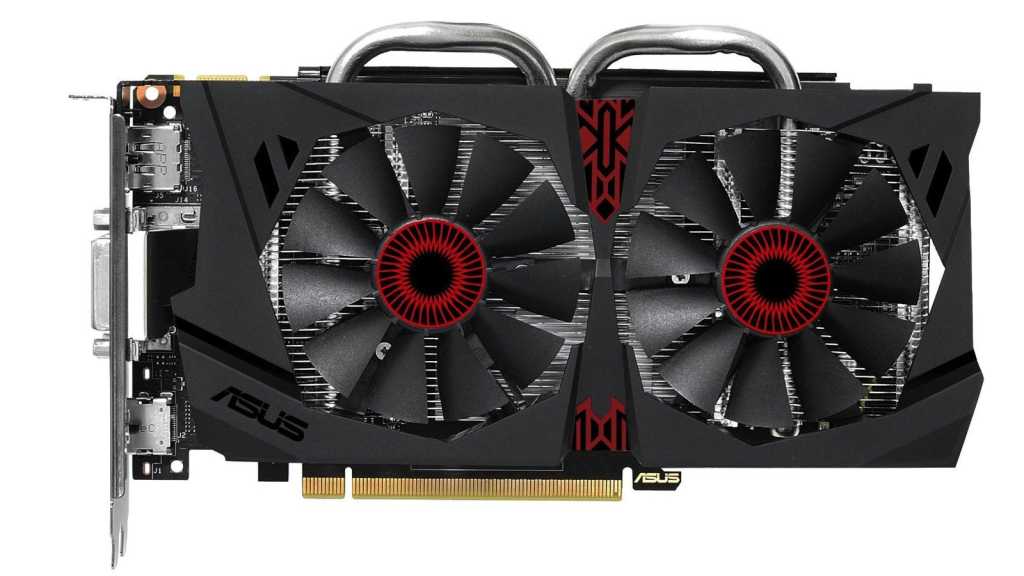 The Asus Strix GTX 950 Gaming is a low-cost gaming card with competent overclocked performance at 1080p combined with excellent build quality, low power consumption and very low fan noise. However, faster cards with more memory are probably financially within reach of anyone who spends a reasonable amount on games and we suggest going for a GTX 960 if you can afford it.

The GTX 950 GPU is based on Nvidia’s Maxwell core, and in this is case a cut-down version of the very popular GTX 960. Here’s our Asus GTX 950 Strix Gaming review.

You can buy the Asus GTX 950 Strix from Amazon for £149.99. Prices change daily, so don’t expect it to be exactly this amount.

Being a cut-down version means the GTX 950 has 768 CUDA cores instead of the 1024 of the GTX 960. In its default configuration, it’s also clocked around 10 percent slower than the faster chip. While the GTX 960 comes in both 2GB and 4GB configurations, the GTX 950 is limited to a maximum of 2GB GDDR5 video RAM which also runs a little slower at 105.6GB/sec rather than 112GB/sec.

In practical terms that means you’re likely to hit 60fps on most games at 1080p, but with lower quality settings than you could achieve with a GTX 960.

However, this particular card is no vanilla GTX 950. The Asus GTX 950 Strix comes factory overclocked and with an excellent twin-fan thermostatically controlled cooler, which will often run without making a sound. The fans will only spin up when necessary, which means that a lot of the time they will remain still, allowing the card to cool itself passively via its large 10mm heatpipes and heatsink arrangement. Even under heavy gaming, the card stays remarkably quiet.

With this card you get a core speed increase from 1024MHz up to 1140MHz with a boost-mode speed of 1329MHz, up from 1188MHz in the reference design. This brings the 950 Strix closer to the performance of a reference model GTX 960, but still noticeably behind. Asus also includes the excellent GPU Tweak II utility which allows you to push the overclocking even further. The software includes a simple one-click ‘Gaming Booster’ function which can optimise Windows processes and settings to help improve your gaming performance. Unfortunately, you can’t overclock your way around a 2GB memory limitation and several of the newest games can easily exceed this amount.

The thickness of the custom cooling system makes card thick enough to require two slots in your PC, but it looks and feels much more expensive than you would expect from a card at this level. It’s thick heat pipes protrude from the top of the card but you should have no problems installing this relatively short card in the vast majority of PC system cases.

At the rear, the card provides a pair of DVI ports, along with single HDMI 2.0 and DisplayPort connectors and the board is capable of driving up to four displays simultaneously.

To power the card, you’ll need one six-pin PCI-E power connector available from your PSU, which needn’t be too powerful as the whole card will only consume a maximum of around 90 watts, unless you’re thinking of attempting some extreme overclocking.

Our results show that, just as advertised, the Asus Strix GTX 950 Gaming is a competent performer at 1080p, with average frame rates in the region of 60fps achievable on a variety of games with reasonable quality settings – just steer clear of the “Ultra” quality modes and you should be ok.

While the price is reasonably low, there’s no getting around the fact that the GTX 950 is a somewhat hobbled version of the GTX 960 which is available at an extra cost approximately equal to that of one decent game. Even with Asus’s overclocking headroom and boosted base clock speeds, the 2GB memory limit is a serious limitation with many modern games. You shouldn’t buy this card if you’re thinking of gaming at resolutions higher than 1080p.

There’s also fierce competition from the AMD camp, in the form of the Radeon R9 380 which delivers superior performance, comes with the option of double the memory and is available for around the same price as a GTX 960.

However, this card makes perfect sense in a quiet or Home Theater PC, where power consumption and noise are of greater importance than raw performance.

What Asus has produced here is a very fine example of a competent, but ultimately rather limited GPU. However, stick within those limitations and you’ll achieve an enjoyable 1080p gaming experience.

The Asus Strix GTX 950 Gaming undoubtedly has its place, but whether that place is inside your PC will depend on a number of factors. If you need low cost, low noise, low power and reasonable performance all at the same time, then it may be the a good choice for you. Otherwise, do consider spending a little more on a faster card if you can at all afford it. A 4GB card will cost you £30-£40 more, but you should think of this amount in the context of how much you intend to spend on games.

You should also read: Best gaming PCs you can buy