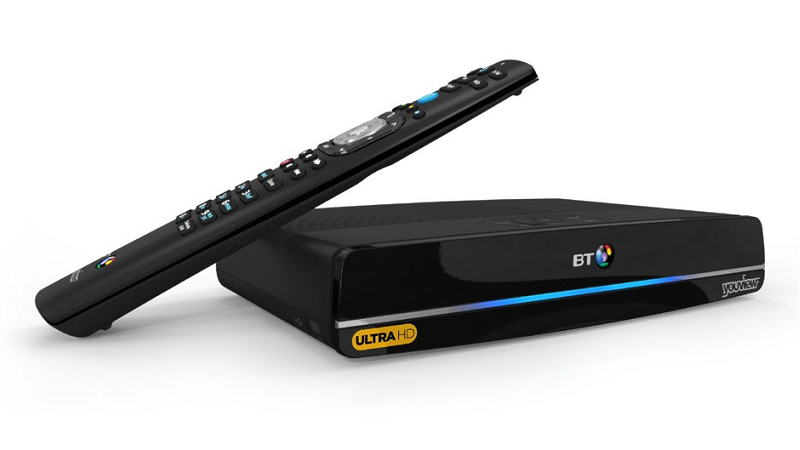 The BT Ultra HD YouView is a decent upgrade for new or existing customers but only if you’re a big sports fan. While the box has 1TB of storage and the quality of the Ultra HD content is superb, a single sports channel won’t be enough to persuade everyone to upgrade. It’s worth investigating the Sky Q system and Virgin’s latest TV6 box, too.

It’s taking some time, but 4K is slowly becoming available for home entertainment and BT’s 4K YouView box and Ultra HD sports coverage is helping the cause.

Maybe you already have a 4K TV, or are considering buying one, but aside from the somewhat limited 4K content available to stream from Netflix and Amazon Prime, what about UHD TV channels? Sky is already broadcasting Premier League matches and F1 races in 4K (via its Sky Q box), and BT has its BT Sport UHD channel which shows UEFA Champions League, Premier League, UEFA Europa League and the FA Cup, along with various motorsports as well.

As with any TV, broadband and landline package, the price is a little complicated. It depends on what level of package you want and whether you’re an existing BT customer. However, the Total Entertainment package you’ll need to get the Ultra HD channel costs £15pm. The Ultra HD box is included with this package (see charges below) You’ll also need BT Infinity fibre optic broadband since the channel is streamed over the internet.

To steam in UHD, your connection needs to run at minimum speed of 44Mb/s, so Infinity 1 (which is capped at 38Mbps) will not be enough.

If you’re already a BT customer then you can add the Total Entertainment package to gain access to the Ultra HD channel – the £18 per month cost will be added onto what you already pay.

The box itself is included and you pay only £9.99 for delivery which is great considering the hardware is likely to be worth £200+. There’s also a £44 engineer installation but you potentially avoid this if you do it yourself.

Those joining BT also get a free box but the activation fee for Infinity broadband is £20, and the delivery charge is £9.99.

The cheapest package which includes Total Entertainment, Infinity 2 and line rental is £62.99 per month (on offer). The delivery charge also covers the the Smart Hub router which comes with the package.

If you’ve been using BT’s previous YouView box ( DTR-T2100) then things will be very familiar with this new Ultra HD model. Not only does the box look the same, apart from an Ultra HD logo, a glossy black front panel instead of silver and a single light on the front.

The remote control is identical (you can even carry on using your old one if you like).

Setup is simple so there’s no need for a BT engineer if you can connect a few cables. You only need to plug in the power, aerial cable and HDMI cable to get going.

You will need a 4K TV, of course, and you may need to be selective about which port you use as your model may not support Ultra HD on every port (there’s a warning sticker on the box to remind you of this).

Using the wrong port means you’ll be watching in downscaled quality. BT has a list of TVs with which port to use here.

You’ll also need an internet connection and like previous BT YouView boxes this one lacks Wi-Fi so you’ll have to connect it using the Ethernet port. This will mean trailing a long cable to your router but it will be worth it for the performance when streaming the 4K channel.

There’s lot of advantages of YouView including plenty of catch-up and on-demand services and the clever way that not only are internet channels shown alongside broadcast ones in the electronic program guide (EPG), you can record them, too.

The box has twice the amount of storage than its predecessor. A total of 1TB and will, according to BT, store up to 600 hours of content. That sounds like plenty but that’s standard definition though so record 4K and you’ll only have 60 hours.

However, there’s still only two HD Freeview tuners inside, so you can record only two shows being broadcast on Freeview at once – Virgin’s TV6 box and Sky Q both let you record more. Remember that BT Sport is an internet channel (as are many of the channels in the premium packages) and these can be recorded alongside two Freeview channels.

Recently, BT rolled out a brand new interface which is even easier to use than before. Now, it’s much faster to access live shows, on-demand players and apps plus your recordings. It also has a completely redesigned interface for BT TV, which is BT’s streaming offering and rival to Netflix.

Here’s how the main menu looks, and it appears as soon as you wake the box from standby:

The Guide is selected, but it’s only a couple of button presses to move to MyTV, which then displays a list of recently recorded shows:

It’s fairly easy to see when a show was recorded, and whether you’ve watched it, but it would be nice to make it even more obvious.

The guide is a little cleaner than before, but uses the same controls for skipping days and recording programmes and series:

BT’s own service for on-demand content includes both paid-for and free shows. It took the decision to make it simple to see what’s free and you can do this just by pressing the green button on the remote.

It takes just two button presses to launch iPlayer, and a few more to scroll along and select Netflix (and yes, this is the UHD version of Netflix).

Usefully, the universal search (to the left of ‘Guide’) searches all players and apps, and it’s usually just a case of entering a few letters via the number buttons on the remote to find what you’re looking for. Unfortunately, there’s no voice search function.

Results are split into ‘on now & next’ and ‘on demand’ so you can quickly see if you’ll be able to watch something instantly or have to wait.

Finally, the settings are much, much easier to navigate and have nice images:

This interface isn’t just on the UHD box, but is rolling out to all BT YouView boxes at the moment.

In a word, yes. We tested the box on an LG 55UF950 and the Ultra HD channel looks absolutely stunning in its 3840×2160 resolution – remember double the resolution means four times the amount of pixels when moving from Full HD. The result (8 million pixels) is a superbly crisp image which feels extremely lifelike, there’s a real wow factor here. Of course, your TV will have an impact on what things look like.

The 4K channel on offer here is BT Sport Ultra HD, so it may not appeal to you if you’re not into football, rugby, cricket or WRC. Sky offers movies and some TV shows in 4K, in addition to sport.

You can pay for a Netflix subscription directly to BT, or you can do it independently if you prefer. Just bear in mind that only the £8.99 per month Premium subscription includes 4K content.

On the BT Sport UHD channel, you get a framerate of 50fps, not 30. Seeing the ball ghosting across the screen is no longer a problem.

There will be, we assume, more channels in the future with 4K content but at the moment it is fairly sparse. Paying extra for a single channel seems a little over the top so hopefully BT can get some more channels going soon.