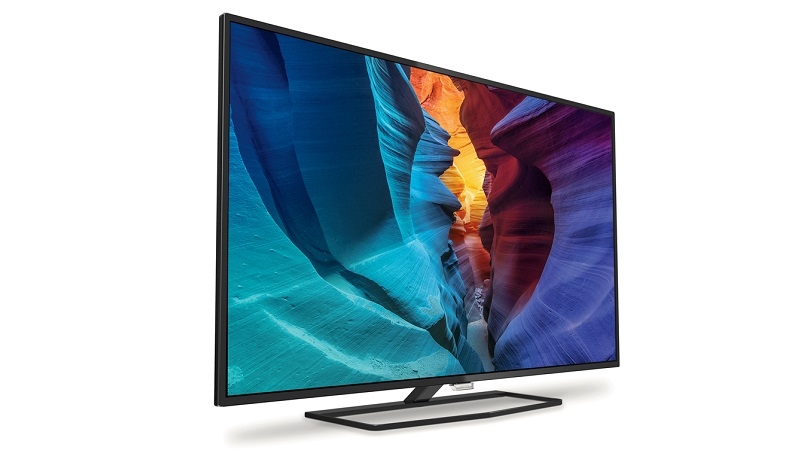 Overall, this 6 Series Philips 6 Series set is solid value. It’s a good advert for Android, and image quality is great. Despite the relatively small screen size, there are benefits to having 4K resolution on a 40-inch panel – but you really do need to get close to the screen to appreciate it. There’s an irrefutable relationship between resolution and detail.

The RRP for this Philips Android TV is £500 but you can grab it from Argos for a cool £379 which is a bit of a bargain. It’s also available from the Amazon marketplace starting at £471. John Lewis doesn’t have this model but does have the 6500 series version which does have Ambilight for £479 which is also worth a look.

Cosmetics are neat and tidy, with a thin black bezel and wireframe pedestal stand. An illuminated logo pouts from the bottom of the panel; thankfully brightness can be moderated or switched off.

Onboard apps include YouTube, Netflix, iPlayer, Dailymotion and some lesser content options. Beyond the BBC, there’s no catch-up provision. You do get, however, a wide selection of casual games. 8GB of local storage is provided, although this can be extended if you really need it. The set has an integrated HEVC decoder, and as a result has a 4K Netflix client. Spotify Connect is also provided.

For a relatively budget set, this 6 Series model offers a high level of image control and personalisation – gamma, dynamic control, noise reduction. Most users will elect to stay with the presets, which comprise Personal, Vivid, Natural, Standard, Movie, Photo, plus ISF Day and Night modes.  Philips image processing tricks include a UHD iteration of its Pixel Plus image engine, with Philips Natural Motion. The latter is not an aid for sports viewing, as it doesn’t retain subjective clarity in scenes of high movement, but it does combat judder from 24fps sources.

Media playback from USB and across a network is excellent. The TV instantly identifies DLNA sources and will play all popular video formats, including MKV. Audio support covers FLAC, AAC, MP3, WMA and WAV.

Picture quality is impressive. The set looks sharp and that UHD panel eliminates any sense of a pixel grit. Backlight uniformity is good. Micro Dimming Pro works with an on-set light sensor to enhance contrast and ensure blacks remain on the right side of dramatic.