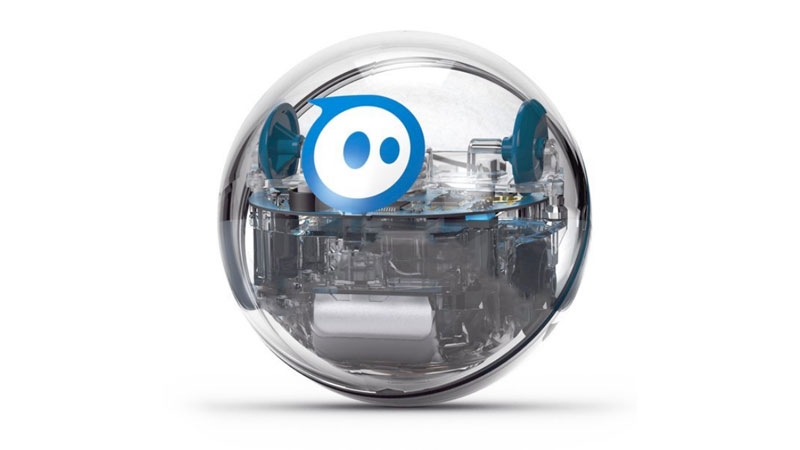 Sphero SPRK (and newer SPRK+) is a fantastic tool to teach kids (and yourself) the basics of programming. Children aren’t sat at a desk staring at a screen. They’re running around the room, controlling a hyper-active robot using commands in an entertaining way of learning how to code. And SPRK grows with the user, even to the extent of showing the raw text-based code for experienced programmers. This SPRK will light a fire under kids’ imaginations, creativity and coding know how.

Sphero SPRK+ is a robot ball that helps teach kids (and adults) how to program, from the basics to complex text-based coding. It’s incredibly fun, and a real innovation in the education, er, sphere.

Sphero has been around for a while as a toy, with a bunch of fun apps that let you control the ball via your smartphone or tablet.

Now that toy has grown up to teach coding, without losing any of its fun side! See also: Best tech gifts for kids and Best Coding Games For Kids.

There are two (very similar) versions of Sphero SPRK available: the original SPRK and latest SPRK+.

SPRK+ is the new and improved version of SPRK, providing more hands-on tools for learning. SPRK+ is equipped with Bluetooth SMART, a new tap-to-connect feature that increases the ease of use specifically for teachers in the classroom. In addition to SPRK’s strong coating on the outside of the ball, SPRK+ has got a scratch-resistant shell, while still keeping the integrity of the see-through shell.

The ball is a classic toy. We’re used to them for catching, throwing and kicking. The sphere shape itself is reassuring and is therefore non intimidating – unless you live on the planet Alderaan.

Learn How To Code

Coding is now part of the UK national primary curriculum, and that’s scary to most parents and teachers whose knowledge of coding is pretty much non existent. See also: Learn how to code.

There are many great ways for kids to learn how to code. The simple event-driven programming language Scratch has many free online resources, and is the usual introduction to coding children start with at school and home nowadays.

The basic and inexpensive Raspberry Pi is a great first computer, with starter kits starting around £25. It plugs into a TV or computer display, and runs a range of basic operating systems for programming. See Best Raspberry Pi Starter Kits.

As fun as Scratch is and as affordable as the Raspberry Pi is, neither is going to get you rolling around on the floor like SPRK, unless you trip over the Pi left casually in front of the TV.

Sphero SPRK adds a rolling, jumping, colliding, colourful literal spin on learning how to code. It looks like a game changer both for Sphero and teaching kids how to code.

Sphero is a robot in a ball, and is all about change and movement.

Note that the older Sphero 2.0 will work with the SPRK app just like Sphero SPRK or SPRK+ but you don’t get the translucent shell. It also works on the Star Wars themed BB-8 Sphero balls.

SPRK – which stands for Schools/Parents/Robots/Kids – turns all that robotic energy potential into a tool to teach coding skills to kids/parents/teachers.

The user-friendly SPRK Lightning Lab 3.0 app (free) is approachable for beginners, with its Scratch-like visual building blocks of code. With the tap of an icon SPRK+ can reveal the underlying text-based code – using its own C-based OVAL programming language – for more advanced programmers.

You set simple commands to roll, flip, spin, and change colour to create increasingly complex instructions for your Sphero robot to follow.

Kids soon forget they are learning to code, and just see programming for exactly what it is: a series of commands that make things happen. And because it’s such fun all the fear of coding quickly vanishes.

The Sphero robot itself is about the size of a tennis ball, and, unlike previous Sphero toys, is now in a mesmerizingly translucent shell that shows all the robot’s inner mechanism. It’s like seeing C3PO in the nude.

You can see what happens when one of your coded commands acts out its moves in the ball, not just in the actions but within the actual ball itself.

It comes with a charger, and luckily was semi charged out of the box because my 9-year-old daughter couldn’t wait to start playing/coding with it. A full charge should give you around an hour’s play.

I love that it also comes with a very old-school cardboard protractor, notebook and pencil, too. This toy isn’t all about screen-based learning. You need to get on your hands and knees and plan Sphero’s route, and catch it when it spins across your floor – it has a maximum speed of 4.5mph. That might sound slow, but you wait to the ball speeds under your sofa. That’s when you realise that 2 metres a second is maybe quicker than you from a standing start.

You give it a couple of hard taps to start it up and send it to sleep. It connects via Bluetooth (setup is simple) and has a range of around 100 feet.

The Sphero ball is pretty hardy. It has to be, as kids are encouraged to drop it six inches onto the floor and make it collide with things.

The block-based coding language requires no previous experience of programming but kids who know a little Scratch will start faster than complete novices.

You drag-&-drop actions (colour, spin, move, change angle of direction, speed, etc) in simple blocks from the app’s menu, and these commands lock together in whatever order you decide. Changing that order is as easy as moving the blocks around the screen.

Even more fun is to set actions and reactions around events such as “On Freefall,” “On Collision,” and “On Land.

Sensors give feedback regarding heading, speed, and vertical acceleration, and you can use these to determine other actions, such as “If Speed is greater than 50, set LED light to blue”).

Don’t worry, there are 12 sample programs to get you started, and you can change these to quickly get the hang of things.

When you’re more experienced you can share your code with others in the SPRK community.

This SPRK and SPRK+ editions of Sphero is compatible with the dozen or so other fun Sphero apps, and older Spheros can use the SPRK+ app too. We prefer the new transparent shell, though, which is very cool.

Sphero has recently released the latest version of the SPRK Lightning Lab all, version 3.0.

Lightning Lab 3.0 introduces more scalable and accessible activity levels for all users with new functions, especially tailored for beginners and experts. This includes:

• Draw: Beginners can give robots commands by drawing a path in the app for their robot to follow.

• Blocks: The block-based drag and drop interface can be utilized by intermediate coders

• Text: Pros can use the new text-based functionality and write their code from scratch (not to be confused with Scratch).

The app will also be available to download for ChromeBook devices. The Chrome app uses the same Lab interface and functions, allowing for ease of use on Chromebooks in the classroom.

There is also a SPRK+ Power Pack, a $1,799 premium kit for educators to use Sphero in the classroom and maker environments; coming soon for the UK. Built with an integrated cooling system, the power pack allows for up to a dozen Sphero robots to charge safely all in one place. The carrying case comes with a dozen Sphero SPRK+ robots, charging case and power adapter, as well as SPRK+ accessories to complete the SPRKEducation experience.