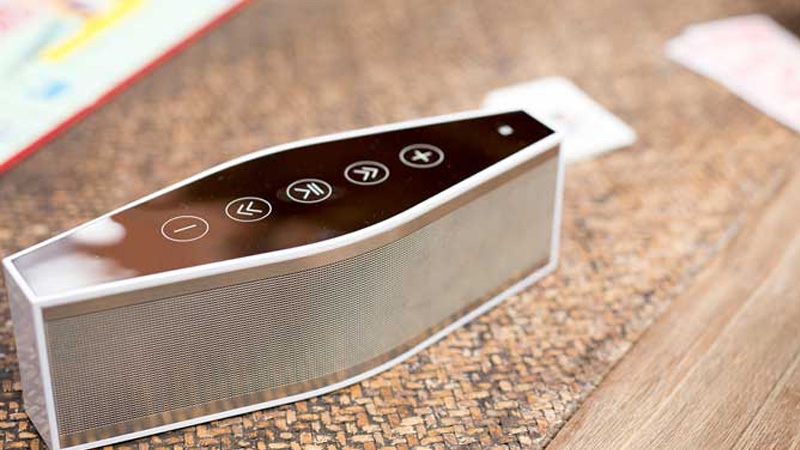 We’re impressed by the Cowin Ark, especially with the levels of bass that it offers. We love the Magnatec technology that wirelessly charges both the soundbar and any wireless charging-enabled smartphone, providing you with a portable Bluetooth speaker that’s ready to go whenever you are. The audio quality is good, providing crisp vocals, clear highs and deep bass. The fact that the two are wirelessly synced means that you don’t have to keep the soundbar and subwoofer in the same place, ideal for use as a mini soundbar for your laptop when gaming or watching a movie.

See next: Looking for something cheaper? Check out our best budget Bluetooth speakers

Design wise, the speaker system looks very premium, despite costing under £150. The mixture of brushed metal sides and a mirror finish on top means that the Cowin Ark demands attention – if you’re looking for a Bluetooth speaker that’ll be ‘invisible’ in its surroundings, the Ark isn’t the best option for you. Despite being quite large (Ark: 300mm x 145mm x 170mm and Cruze: 200mm x 65mm x 60mm) the Cowin Ark looks pretty sleek, which is due to the curved design of the system.

Though the Cowin Ark comes as a two-piece Bluetooth speaker system, the Cruze can be taken to the beach or the park and be used by itself, thanks to its built-in rechargeable battery. The Ark features Magnatec technology, which syncs the two parts of your system ready for playback, while also keeping the Cruze securely attached to the Ark whenever its placed on top – but that’s not its only functionality. The Magnatec technology also provides wireless charging for the soundbar, which means the Cruze is fully charged and ready to go whenever you are. Oh, and the Ark can also be used to charge up your smartphone too, if it supports wireless charging.

Even though the Cowin Ark is a two-piece speaker system, the two don’t need to be in contact during playback to be in sync. Once you’ve powered on the base and soundbar, they’re automatically linked (thanks to the Magnatec technology) which makes the system adaptable. Watching a movie on your laptop? Playing a game on your tablet? Place the soundbar in front of the display and place the Ark on the floor for an enhanced wireless audio experience.

We found the freedom to move the system around appealing, especially as we didn’t have to worry about the battery life of the soundbar – if it ran out, we’d just place it on the Ark and carry on listening. Although with this being said, that’s a situation that we’ve rarely experienced due to the eight-hour battery life of the Cruze, and the fact that the Ark keeps it constantly topped up when attached.

As you’ve probably guessed by now, the speaker system primarily uses Bluetooth to connect to your devices. It also includes NFC for easy, one-tap pairing and also an auxiliary input for those that want to play music from devices that don’t feature Bluetooth connectivity.

The only downside of the Cowin Ark is its built-in voice prompts. Don’t get us wrong, we like voice prompts on Bluetooth speakers – any device that doesn’t feature a display benefits from audio cues, but those included with the Cowin Ark are… weird. You’ll hear audio prompts when the Bluetooth speaker is ready for connecting, once its connected and if it disconnects, but the accent makes these prompts almost inaudible. We actually thought it was speaking a different language and we’d been sent the wrong speaker, but after a few listens we were able to pick out words. It’s by no means a huge deal, but be prepared for friends mimicking the way it says “connecting”.

Even though the Cowin Ark has peculiar audio prompts, this is no way reflective of its overall audio quality. We were really surprised by the audio quality of the Cowin Ark, especially with regards to its bass output. The levels of bass are nothing short of phenomenal and when paired with a soundbar that can produce 35W of room-filling audio, the result is a well rounded sound perfect for a variety of tasks, from background audio when you’re relaxing to playing tunes full blast in your living room with your mates.

So, what’s powering that room-filling audio? The Cowin Ark features two speaker drivers, two passive radiators and a 5in ported subwoofer. Cowin opted for a ported subwoofer as ported subwoofer cones generally have better freedom of motion, which redirects the sound from the rear of the cone to the front, providing more prominent levels of bass. Even without the Ark connected, Cruze will still provide a great audio experience, just without the prominent bass the Ark is known for.

The audio isn’t just loud and bassy though; it produces great highs, vocals are crisp and most importantly, there is no distortion at high volume – something that bassy speakers usually suffer with.

So, just how much will the Cowin Ark set you back? At the time of writing, the Cowin Ark costs £149.99 and is available to buy directly from the Cowin Music website. It’s a bit pricier than other Bluetooth speakers on the market, but if you love deep bass and loud music, this is the ideal speaker for you.