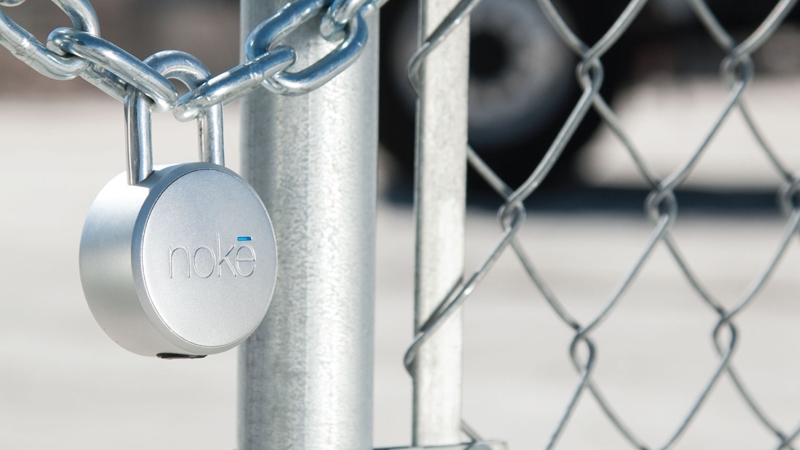 The Noke may be weighty and expensive, and its battery non-rechargeable, but we’re genuinely surprised no-one came up with the idea sooner. Noke lets you secure your belongings without having to carry a key or remember a combination, and security doesn’t get much simpler than that.

If our phones can unlock our wallet then why not everything else we want to secure? We review Noke, the smart Bluetooth padlock. (Looking for more stocking-filler gadgets? Try our Christmas gift guide.)

Noke (pronounced ‘no-key’) may not be cheap, but it’s the smartest padlock we’ve come across, with a keyless design that requires you to connect a paired phone via Bluetooth to unlock the device. Also see: Best tech to take on holiday 2016.

Noke is available to pre-order now in the UK for £59.99 via Firebox, or if you’re in the US you can pre-order direct from Noke.com, with the smart padlock costing $69.99. Firebox expects the Noke to be available by 4 December.

The Noke Bluetooth padlock is good-looking in either black or silver, reassuringly weighty (perhaps a little too much so when carrying it with you), and built to last from boron-hardened steel. It’s resistant to the elements with waterproofing protection, though Noke notes extreme temperatures can shorten the life of the CR2032 replaceable battery inside.

And that was our primary concern when we first saw the Noke – what if its battery dies mid-use? Or what if your smartphone battery dies, or you don’t have it with you? Noke has workarounds for both.

The CR2032 battery should last a full year with everyday use, claims Noke, and less frequent use will significantly improve its lifetime. In order to replace the battery you unlock the Noke then twist off the backplate, but if it’s too late and the battery has already run flat you can pull out the plug at the bottom and jump-start the battery. Doing so simply requires you to take the new CR2032 battery and hold it against the prongs that are otherwise concealed by the plug. CR2032 batteries are widely and cheaply available, so getting hold of a replacement at short notice shouldn’t be overly trying – provided you’re near a town. Also see: Security Advisor.

If it’s your phone that’s unwilling to co-operate, you can bypass the Bluetooth requirement with the Quick Click code (a series of short and long presses of the shackle) that you created at setup. Noke also makes a Bluetooth fob, which costs $24.99 direct from Noke.com.

Noke works with Android (4.3+), iPhone (iOS 7+) and Windows (8.1+) phones running Bluetooth 4.0. If you’re worried about the security implications of using a Bluetooth lock, Noke notes that Bluetooth 4.0 uses 128-bit encryption to secure transmissions, to which the company adds the latest in PKI technology and cryptographic key exchange protocol.

To set up Noke you download the free Noke app from your handset’s official app store, create a free Noke account, then add as many Noke padlocks as you desire. Each can be given a name to differentiate it from other Nokes on your account. As well as adding multiple Nokes within the app, you can also add multiple users.

(It’s worth adding that you cannot pair a Noke that has already been set up by another user without their permission, so it won’t be possible for someone to download the Noke app, create an account and pair to your Noke when you’re not looking. Noke will email you if someone attempts to do so, too.)

In our tests the Noke was quick to connect to our Samsung Galaxy S6 and unlocking the padlock took merely a couple of seconds. More importantly for a Bluetooth device, it worked every single time.

We also found the Quick Click code easy to use, since the LED on the front flashes blue for a short click and white for a long click. If you’ve ever taken out your contacts to go for a swim, thrown your stuff in a gym locker and have later had difficulty seeing the numbers on a combination padlock, you’ll know just how useful this could be.

One of the things we really like about the Noke is its ability to be shared with your friends – the Bluetooth equivalent of giving them a spare key to your padlock. It then tracks every time the device is unlocked, and even notes the location in which it was unlocked and by whom.

Say you’ve used a Noke to lock up a shared tool shed, and someone’s run off with your power tools. You’ll be able to see within the Noke app who was last to access the tool shed, and even if nothing is missing you’ll have peace of mind that they won’t accidentally leave their keys lying around or forget the combination code. One issue we found with the Noke app, however, is that it records the time as GMT+2 and we couldn’t find a setting to change this.

We’d also like the ability to monitor the battery’s remaining power within the app – something that should be possible, according to Noke, but doesn’t appear to be in the current Android app. A battery that can be recharged over Micro-USB would also be a welcome addition to a future version of the Noke – although it’s easy to jump start the Noke, spare batteries aren’t so easy to come by out in the sticks.