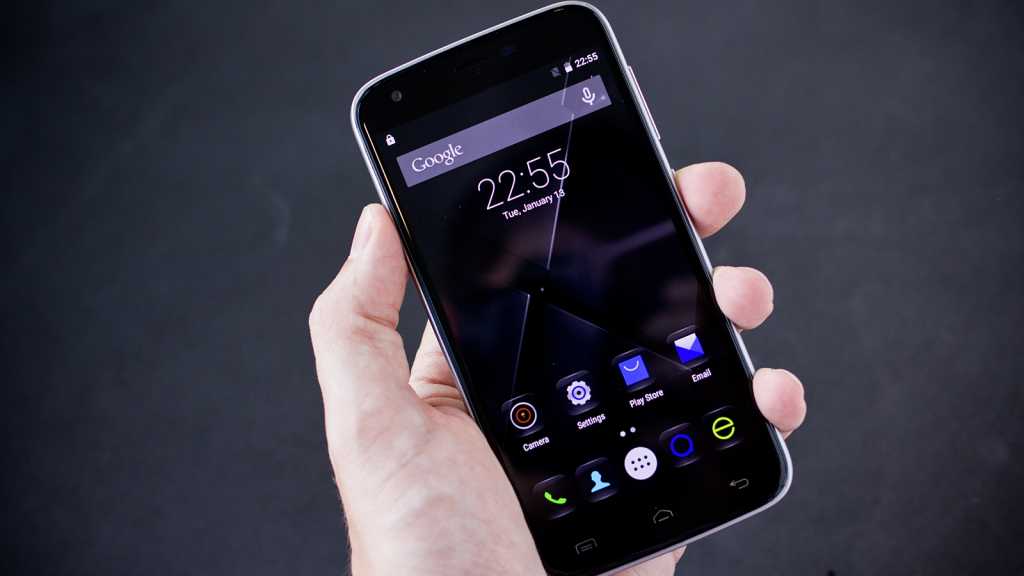 The Doogee Valencia 2 Y100 Pro isn’t our cup of tea, but as budget phones go it isn’t bad. For what it lacks in style it makes up for in specifications, offering good value as an acceptable all-round Android phone just a few pounds over £100.

Doogee’s Valencia 2 Y100 Pro is a cheap and cheerful  budget smartphone a few quid over a ton. We see how it compares to other cheap Android phones in our Doogee Y100 Pro review. Also see: Best budget phones 2015/2016.

The Y100 Pro is billed by Doogee with slogans such as ‘To be perfect’ and ‘Pioneering seamless design’. In its marketing materials it states: “Each detail was meticulously designed, engineered and crafted. The back was taken as seriously as the front, for the sake of beauty.” Also see: Best smartphones 2015/2016.

I must be missing something, because this phone looks as cheap as they come. Our photographer Dom has done a great job, and to be fair the phone feels reasonably sturdy, with no creaking or flexing under pressure, but of all the budget smartphones we’ve seen of late the Y100 Pro stands out as being one of the ugliest. And that’s a surprise, as the company’s F1 Turbo Mini was a good-looking budget phone.

Available in grey or silver, it is possible that the grey version looks a lot better than our silver review sample. And it’s also possible that we’ve simply been spoiled by a run of metal-framed budget phones that look far more expensive than they are; after all, we would never expect a premium design from a £100 phone. (And perhaps it’s just me, since other reviewers haven’t been quite so critical.) Also see: Best MiFi 2016.

The brushed metal-effect rear is unconvincing as anything other than silver plastic. It’s supposed to wrap around the phone to create a seamless feeling with no noticable edges or gaps, though you can clearly feel the edge of the screen (that’s despite the 2.5D curved glass) and in taking off this rear cover you realise the power and volume buttons are built into the case. The speaker is also at the rear, meaning audio is directed straight into your hand.

The power and volume buttons are on the right edge where you’d expect to find them, but the Micro-USB port is at the top – we just can’t get the hang of plugging it in this way around. Also at the top is a standard 3.5mm headphone jack.

The screen is prone to attracting fingerprints and, although it’s a reasonable size at 5in and pretty sharp with its HD resolution offering 294ppi, it’s not overly bright. Colours are realistic, but given the fact all the wallpapers, icons and menus have a black theme we’d prefer to see deeper blacks.

Its price puts it in direct competition with the £109  Samsung Galaxy Core Prime, but that phone looks significantly more attractive. As does the Just5 Blaster 2, which is available at around the same price. Also see all Android phone reviews.

This review hasn’t got off to a great start for the Doogee, but we’ve been taught never to judge a book by its cover. If it’s what’s on the inside that counts then the Y100 Pro is a decent budget offering.

But where the Blaster 2 has a 1.5GHz MediaTek MTK6732, the Doogee has a 1GHz MTK6735. Performance in our benchmarks was lower, although still decent for a budget phone. See all smartphone reviews.

In Geekbench 3, used to measure overall processing performance, the Doogee turned in 491 points single-core and 1401 multi-core. That’s on par with the Galaxy Core Prime, which was capable of 472- and 1429 points respectively, but behind the Just5’s 736- and 2183 points.

We use GFXBench to measure graphics performance, and here the Doogee turned in 9fps in T-Rex, and 4fps in Manhattan. Both the Samsung and Just5 were capable of more, scoring 8fps in Manhattan, and 14fps (Just5) or 15fps (Samsung) in T-Rex.

Our final test is SunSpider, and the Doogee lagged its rivals at 1955ms. The Blaster 2 recorded 1202ms, and the Samsung 1400ms (lower is better in this test). You can compare the Y100 Pro’s performance to other Android phones we’ve tested in our article What’s the fastest smartphone 2015.

It must be noted that benchmarks are synthetic, and in real-world use the Doogee didn’t feel noticably slower than either the Samsung or the Just5. In fact, most undemanding users will be quite happy with this performance.

Doogee fits a 2200mAh battery, slightly higher in capacity than that of the 2000mAh Galaxy Core Prime, but less than the 2700mAh battery inside the Blaster 2. It stands out though for its ability to charge up to 70 percent (over Micro-USB using the supplied charger) in half an hour.

Something it offers over and above UK budget phones, though, is dual-SIM dual-standby functionality. This phone can support two SIMs, one a standard (full-size) SIM and the other a Micro-SIM. It’s also a 4G LTE phone, and covers all three UK LTE bands. Also see: Best dual-SIM phones 2015/2016 and  How to check whether a phone is supported by your network.

The Y100 Pro is advertised as having 13Mp rear and 8Mp front cameras, but in fact achieves this through software. What you actually get is an 8Mp rear camera with f/2.0 aperture and an LED flash, and a 5Mp front camera.

The camera app has the usual shooting modes, covering everything from Live beauty to Panorama and Live Photo. In normal mode you can also turn on face detection, smile shot and a 20-shot burst mode. By default the camera shoots at a 4:3 aspect ratio.

Images are acceptable at this price, but don’t expect to be able to take the most breathtaking photos. Colours are reasonably true, but photos appear a little washed out and, viewed at full-size, there’s a lot of blurring. We’d recommend leaving on HDR (shown in the second shot), which helps the Doogee to better handle light and dark areas of a scene. Also see: Best phone camera 2015/2016.

The Y100 Pro runs Android 5.1 Lollipop out of the box. It looks a little different to other Lollipop phones, with a black-themed UI that replaces the standard app icons and changes the settings menu to white text on a black background. It’s otherwise fairly standard Android Lollipop with the addition of some smart gestures for controlling various apps and smart wake up features that include the ability to double-tap from standby or draw a letter to wake an app of your choice.

A few extra apps are preinstalled, too, such as the Go keyboard and Xender.