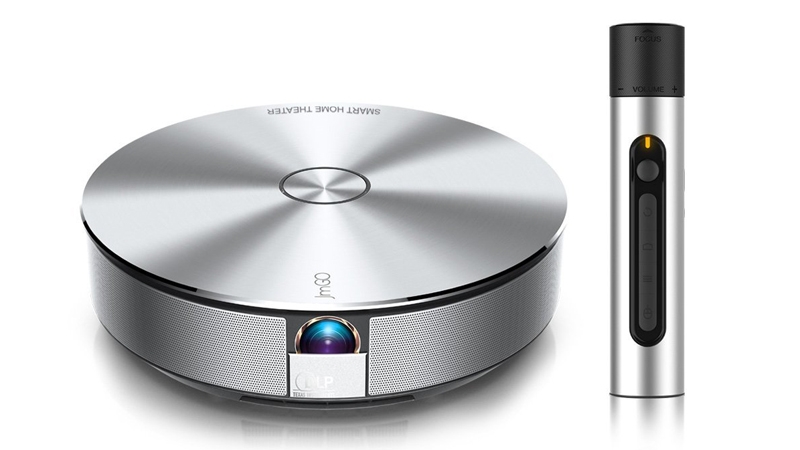 One of the coolest-looking home projectors we’ve ever seen, the JmGO G1 is an excellent buy. The remote control takes a while to get your head around, and we’d have liked the ability to pair a Bluetooth mouse or keyboard instead, but it’s otherwise very difficult to find fault with the J1 at £449.

‘Gorgeous’ and ‘projector’ don’t often sit well together in a sentence, but that’s exactly what you get with the JmGO G1 Smart Home Theater. We’ve never seen a home projector oozing with so much style – this is something you want to keep on show, not mount out of the way. See all projector reviews.

But this isn’t just any home projector. Capable of projecting a full-HD picture (upscaled from 720p), the JmGO G1 also supports Active 3D (glasses are not supplied). It’s an Android TV and a Bluetooth speaker, with HDMI, USB and AV inputs that could potentially accommodate a digital TV tuner, a games console, a portable hard drive and more. And it’s entirely silent in use, making it the perfect fit for any bedroom or living room.

JmGO isn’t a brand we’ve encountered before, but you can pick up the G1 from Amazon UK for £449.99. We think it worth every penny, as you’ll discover below.

The JmGo G1 is a DLP projector with a DMD chip built into a circular aluminium-magnesium alloy housing, with an incredibly small footprint (219x60mm) and just 1.55kg in weight. A power button sits in the centre of the polished metal top, glowing blue when the projector is in operation and red in standby mode.

A metal grille wraps around the device’s middle, concealing four 5W speakers with Dolby Digital Plus that are capable of producing stereo sound so loud your neighbours may complain. The JmGO G1 also has a S/PDIF/headphone jack should you need to quieten things down.

In standby mode Bluetooth 4.0 connectivity lets you take advantage of that stereo sound and operate the JmGO G1 as a Bluetooth speaker. Annoyingly you can’t use Bluetooth in projector mode to pair a wireless keyboard or mouse, although there is a remote control supplied in the box and two USB ports (1x USB 2.0, 1x USB 3.0) that you could use to hook up a Bluetooth dongle and connect wireless peripherals this way.

The remote control has a unique design, a cylindrical device that takes two AAA batteries (not supplied) and connects to the JmGO over the 2.4GHz frequency. Made from plastic it doesn’t feel as high in quality a device as the projector itself, but this multifunctional remote can do it all.

Twisting one end of the remote control adjusts the volume, while pulling out the end and twisting lets you manually alter the focus. There’s a power button at one end, and on the side four buttons for back, home, options and entering mouse mode. A speaker button lets you audibly control the G1, but currently in Chinese only. Just below this sits a mute button.

Using the mouse mode can be a bit fiddly and takes some time to get used to; it doesn’t help that the mouse is very sensitive and works best when you point the controller directly at the projector. At times using the mouse is the only way to access options within certain apps, but in other cases we found it easier to use the small toggle that works like a joystick. It lets you scroll through web pages and apps, move up, down, left and right through menus and push down to select.

Setting up the JmGO G1 couldn’t be easier. You point it a blank wall or screen, plug it in and turn in on. The G1’s UI is based on Android 4.3 KitKat, and it’s preinstalled with various apps including Facebook, Twitter, Netflix, XBMC, Gmail, Skype, Amazon and full access to Google Play. These are found on the main screen, and you can hit left to change the source to AV or HDMI, or right to access the device settings. Also see: Best media streamers 2015.

Within the image settings are options to alter the brightness, contrast, image mode, aspect ratio and more. Digital zoom lets you resize the display to match your screen or wall, while automatic- and manual keystone correction adjust the angle of the display so you get a great picture no matter where the projector is sited. You can also turn the display upside down, should you want to mount the projector from a ceiling (a bracket is supplied in the box).

We connected the G1 to our home network over Wi-Fi (an ethernet connection is also available), then logged into our Google account and set about downloading various apps including Google Chrome and our usual Android benchmarking utilities. The only app we had trouble with was NowTV – if you want to access Sky content you’ll need to physically plug in a Sky- or Now TV box via the HDMI input (the apps will install but report an error when you try to use them).

And that leads to our one major gripe with the JmGO G1 – there’s only one HDMI port. We bought an HDMI splitter that turned the single port into three, but of course that meant yet another remote control was required to switch between them. Still, with our three-way HDMI splitter in place we were able to connect a NowTV box, a Freeview box (which we found easier to control than using an app such as TVCatchup) and a DVD player.

It’s worth pointing out that the JmGo G1 also has a 3.5mm AV input that you can alternatively use to plug in a digital TV tuner. (Contrary to the Amazon UK listing there is not a digital TV tuner inside the G1.) And there are those twin USB ports, which can be used for attaching portable storage or peripherals.

With everything in place we were ready for the ultimate home theatre experience. We didn’t have any Active glasses to test the 3D functionality, but we were pleasantly impressed with the HD image supplied by the G1, and wowed by the audio.

The G1 operates at 1500 Ansi Lumens. This is bright enough to see what you’re doing when setting up the projector in daylight, but for best results you really need a dark room. Dynamic contrast is 1000:1, and JmGO claims a throw distance of between 20- and 300 inches.

Inside the G1 is a quad-core ARM Cortex A9 processor, Mali 450 MP4 graphics and 2GB of DDR3 RAM. The JmGO also has 16GB of flash storage built in for your apps.

This hardware isn’t anything like as powerful as what may be built into your phone or tablet, but it’s sufficient for navigating the G1 and playing media.

In our real-world usage we found the G1 only occassionally laggy when navigating menus, though we weren’t entirely sure whether it was the box or the remote control at fault. Our only real frustration was the over-sensitivity of the mouse mode.

We did run our usual Android benchmarks on the G1, and while they don’t make for the best reading it’s worth pointing out that this is not intended to be a high-performance Android PC. In Geekbench 3 we recorded 346 points in the single-core test and 997 points multi-core. AnTuTu turned in 20,539 points.

In our GFXBench graphics test the JmGO G1 was capable of 7fps in T-Rex, and it recorded a low 1732ms in SunSpider.

None of these benchmarks take away from the fact that as an Android TV the JmGO is more than capable, and we think an excellent buy.