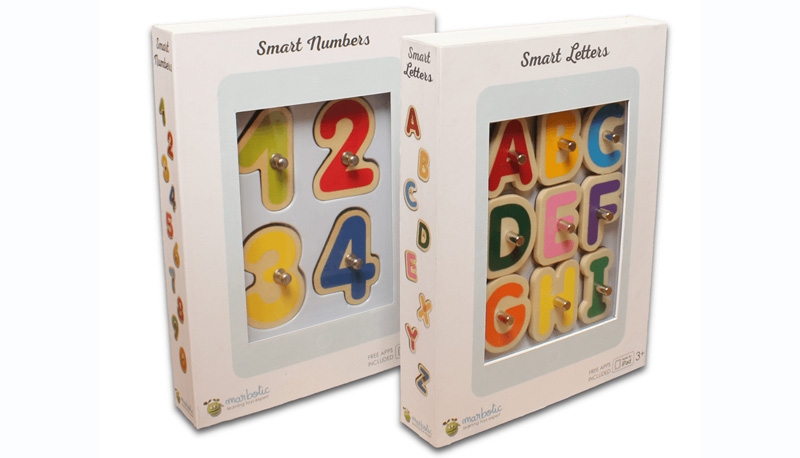 Marbotic Smart Numbers and Smart Letters merge Montessori methods of learning and tablet digital wizardry. They add the vital physical element of educational toys that really help young children learn their basic numeracy and literacy. Of the two Smart Numbers is the best and thoroughly recommended. Smart Letters isn’t far behind but is perhaps let down by the choice of upper-case letters and the rather annoyingly long phonic audio on one of the apps. That said, both of these clever Montessori educational toy and app combinations will help most pre-school or foundation-level children more quickly learn their numbers and letters, and beginners’ numeracy and literacy.

The world of children’s learning toys has changed incredibly since I was knee high. It has been revolutionised by electronic gadgets – which usually leads to moaning about the loss of tactile, old-school toys. First came battery-driven toys like Simon, then the games consoles, and most recently tablets boasting a choice of millions of apps.

We can hark back to the good old days, of wooden counting rods, jigsaws and puzzles, and bemoan the dominance of digital. There’s a difference between a touchscreen and actually touching objects. See also: How much screen time is healthy for kids?

One area where touch playing is vital for a child’s educational development is pre-school literacy and numeracy.

The Montessori method is built around real-world objects manipulated to nurture the child’s exploration and creativity. As great as some kids’ educational apps are, children lose out without some object-based learning.

See Best maths apps for kids, as well as Best apps for learning to tell the time , and Best Phonics Apps for kids.

French company Marbotic, founded by mother Marie Merouze, is dedicated to bringing back stimulating learning through touch and feel as well as the brain.

It has two games – Smart Numbers and Smart Letters – that are a combination of tablet apps and real wooden objects; both inspired by Montessori learning methods.

Both are great examples of what are being called “Connected Toys”, which combine both physical objects and touchscreen devices.

Previously we reviewed one such Connected Toy, Osmo, which we are big fans of. Read our iPad Osmo review. There are others becoming available, too, such as Tiggly Shapes, Tiggly Maths and Tiggly Words.

Smart Numbers includes ten wooden numbers, which are detected by tablets, were inspired by traditional games and the Montessori learning method.

The wooden numbers are chunky (about two inches high) so a child gets to really engage with the shape to aid recognition. The child places the numbers on to the tablet screen, which recognizes the shape and allows kids to learn to recognize the shapes, count in order, and add numbers together.

Three apps are included (as free downloads) to work with the numbers on iPad and Android tablets.

“10+ Fingers” is the starter app, as described above, using the numbers plus a child’s fingers. “Up to 100” introduces number combinations for counting above 9. This also teaches kids counting using the Montessori Golden Beads method, which will propel children’s numeracy faster than traditional methods of number learning.

“More or Less” takes things a step further with Addition and Subtraction using the Golden Bead method and the wooden numbers.

I wish I’d had Smart Numbers and these apps when my daughter was pre-school. She did attend a Montessori primary school, so the methods used here are very recognizable to me.

A fully trained Montessori teacher I showed the game too did think that the steps were maybe too fast, and a true Montessori approach would require a teacher to be present showing the chilkd the basics of numeracy. That echoes a major pint when discussing educational games for children: this is not a substitute for teaching, or indeed good parenting.

The Smart Numbers apps are available to download in eight languages, including English, French, Spanish, German, Portuguese, Italian, Dutch and Swedish. This gives the game an entirely new educational focus if you so wish – now it’s just as suitable for older kids learning languages, and how to count in a foreign tongue.

Smart Numbers costs €34.99, plus €3.98 shipping within Europe; or free shipping to France and the US. You can also buy it from Amazon for just over £30. See the bottom of this article for the best prices. It is available for both Apple iPad and Android tablets.

Smart Letters is the literacy equivalent, and has just been released after a successful Kickstarter campaign.

You get a box containing the 26 letters of the alphabet in old-school wooden shapes. It’s connected to two downloadable apps: Vocalbubble and Alphamonster.

Each wooden letter interacts with these apps on a tablet (for now iPad only), helping to build a picture of the alphabet and early word formation in a child’s mind.

“Alphamonster” is similar, showing pictures of nouns and reading out the letter in its phonic letter sound. One thing I’d have changed here is the middle phonic part, where the audio element might be great for teaching the child but may well send a parent insane. A shorter audio version as an option would be appreciated!

The third app (not available for testing at the time of writing) is called “My Words” and teaches kids to build words from the letters.

Unlike numbers, letters usually come in two forms: Lower (a) and Upper Case (A). The wooden shapes in Smart Letters are all upper case. As far as I remember from Montessori, letters should be first introduced in lower case, as that is how children will first see words written. This is a thorny educational subject (either t eaching lower case letters is best or upper case letters are best) but the fact that letters are written two different ways does limit Smart Letters somewhat.

The apps do introduce lower-case letters, but without the wooden shapes this could be confusing. Obviously having 52 letter shapes would push the price up, but maybe Marbotic should consider the option.

Again the apps are available in multiple languages, which using Vocalbubble could help children pick up foreign letter sounds and vocabulary.

Smart Letters costs €49.90; at the time of writing it was available for pre-order with availability expected this month. To begin with it will be available for iPad only, with an Android version expected later.