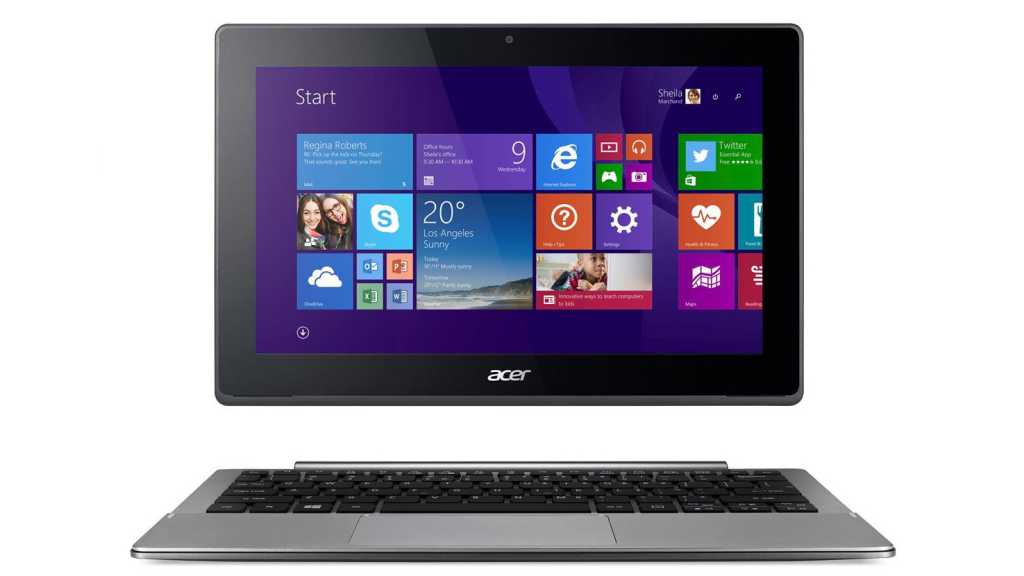 At first glance, a 2-in-1 seems smart except evidence suggests few people want or need Windows tablets. Acer has also failed to address critisicms of last year’s Switch 11 in this new model. This leaves us an underpowered, ill-balanced and clunky little laptop with mediocre battery life and a nice screen. A better Windows laptop is the £650 ZenBook UX305. But if you need a tablet, buy an iPad Air 2 for £399.

The Switch is essentially an 11.6in Windows tablet with a custom keyboard that snatches into place with magnets. Once docked you get the benefit of real keys and a buttonless trackpad, these talking to the tablet through shiny contacts rather than Bluetooth. Like Microsoft’s Surface Pro 4, the hinged screen becomes continuously movable to adjust rake; but similarly to the last Switch 11, the ensemble is far too back-heavy. Also see: Best new tablets coming in 2016.

There’s no extra battery in the keyboard, which is a shame as battery life still falls short – just 4 hr 45 min in our streaming video test, where an iPad goes twice the distance. It’s doubly disappointing when last year’s Switch 11 ran almost as long with a real Core i3 chip. The Core M is Intel’s ulta-low-power processor but clearly this setup isn’t as efficient as it could be.

On some variants you can get additional storage in the keyboard, if only a whirring mechanical disk (500GB), but it’s useful to complement the tablet’s M.2 flash drive.

As a tablet the Acer weighs around 760g – or approaching twice the weight of an admittedly smaller iPad Air 2 – and this mass can swell to a portly 1.6kg combined with keyboard. At 24mm thick, the Acer is too outsized for the ultrabook club.

Unlike an iPad, or even an Asus Zenbook running the same Core M chip with HD Graphics 5300, action gaming is out. We found the Switch 11 V averaged just 23fps in Tomb Raider at 720p and the lowest possible detail.

Following Apple, Acer has eliminated the air gap under the top glass that makes shiny screens less comfortable to view, with a full-HD IPS panel of some merit. Colour gamut was only 74 percent sRGB but it had good contrast (740:1) and wide viewability. Judged by eye, it’s a sharp and vibrant screen.