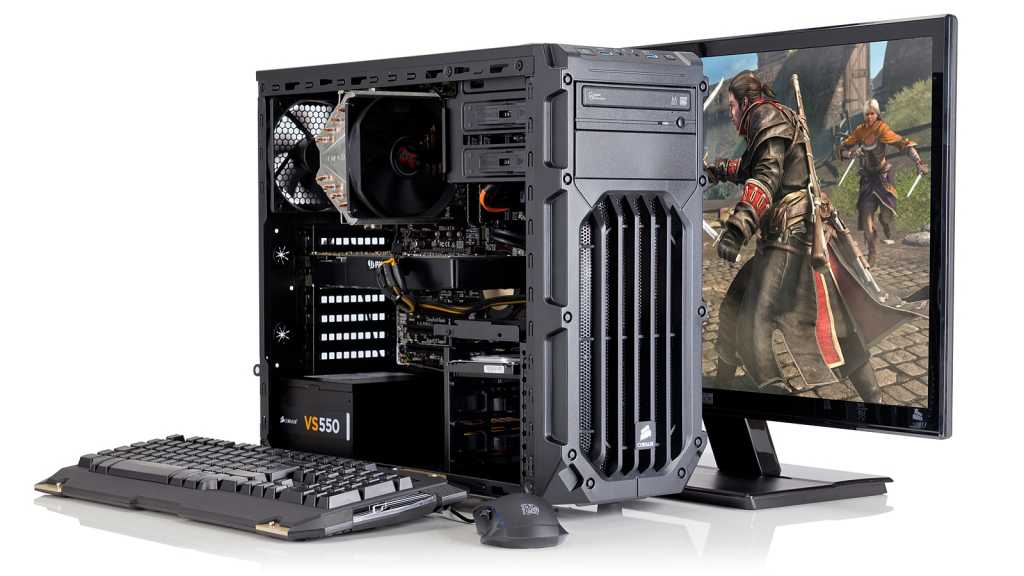 At £899.95 without the monitor, the Eclipse SuperNova i566n970OC is one of the less expensive Skylake gaming PCs. Its performance lags a little in benchmarks, but it’s also more expandable than compact systems such as Chillblast’s and has a larger SSD.

The rugged, industrial styling of the Eclipse SuperNova i566n970OC ensures that there’s no mistaking it for anything other than a gaming PC. Closest in appearance to Cyberpower’s Infinity X55 SE, the Corsair Carbide Spec-03 case used here adds a few more moulded details and a more imposing grille making it either the most badass of the bunch, or perhaps the ugliest depending on your preference. A Mesh panel front allows a red LED to shine through from the front, while the side window panel gives a clear view of the internal components – not that there’s really a whole lot to look at. Also see: Best gaming PCs 2015/2016.

Cooling the overclocked Intel Core-i5 6600K processor is a Zalman CPS11X Performa heatsink and fan combo, above a Palit Nvidia GeForce GTX 970 graphics card. Eclipse has overclocked the main CPU from 3.5GHz up to 4.2GHz, while the graphics card runs at Nvidia’s default stock speeds. This immediately puts the Eclipse SuperNova i566n970OC at a bit of a disadvantage against PCs which run the CPU faster and come with factory overclocked graphics cards. See all PC reviews.

Storage is provided by a 240GB Kingston HyperX Fury SSD, paired up with a 1TB Seagate Barracuda hard drive. We’re pleased to find a decent capacity SSD installed here, as it’s much less hassle than a 128GB model which requires a little more care to ensure it doesn’t fill prematurely. It’s not as fast though as the M.2 SATA Express SSDs provided by Chillblast and Mesh. Given the choice, we think the extra capacity is probable more useful for most people as it will allow more games to be installed on the SSD rather than the hard drive and cut down on loading times. A 24x speed DVD burner is also included as standard.

At the heart of the Eclipse SuperNova i566n970OC is an Asus Z170-P motherboard, which supports M.2 and USB 3.1 as well as providing an extra pair of PCI slots, not present on the mATX board found in Chillblast’s system. It also has an illuminated audio section on the motherboard, which provides a little extra interest when viewed through the side panel. You also get customisable fan control and a host of overclocking options which should enable to you to increase performance beyond the provided 4.2GHz if you feel the need. See all gaming PC reviews.

The Eclipse SuperNova i566n970OC comes with 16GB of the fastest DDR4 memory of the whole group, but there’s no getting away from it, the performance of the Eclipse SuperNova i566n970OC isn’t exactly spectacular. The PCMark 8.0 Home score of 4574 points is particularly low, although it does pick up in other tests. More importantly though, gaming frame rates are only 1-2 fps behind the fastest systems, so not something you’d notice outside of benchmarking.

Our Eclipse SuperNova i566n970OC review sample was shipped with a 26in 1080p display, but you could change this for a 2560 x 1440 resolution monitor and still have plenty of performance to drive it.

Read next: Learn more about Intel Skylake and Windows 10.