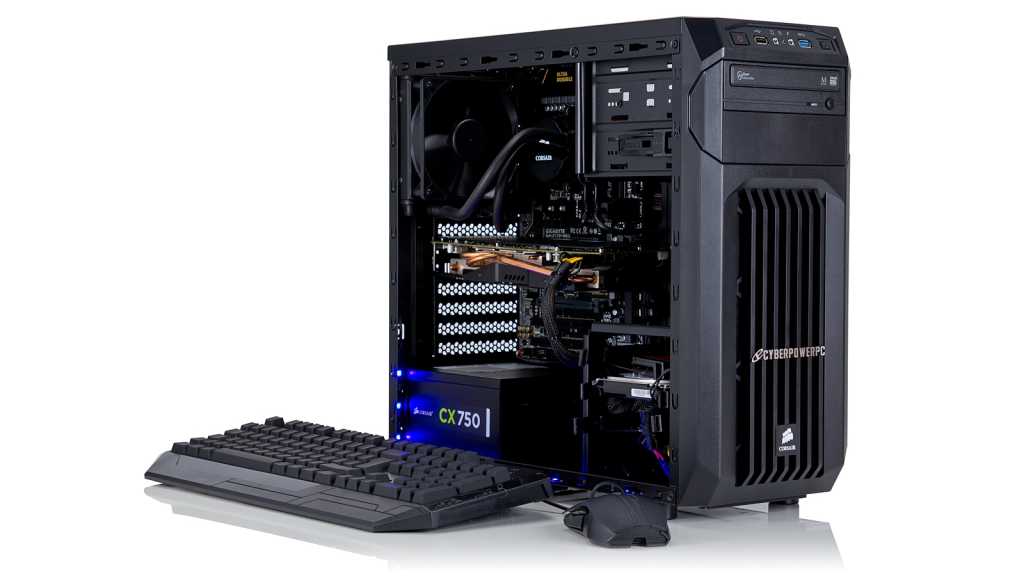 The Infinity X55 SE performs well, but not as well as much of the competition thanks largely to its unambitious 4.2GHz maximum clock speed. It also boots from a rather small SSD without the large performance advantage of an M.2 model. Some will love the AMD graphics card with its huge video RAM capacity, but overall the price seems a little high for what you’re getting.

The Infinity X55 SE is a rugged-looking desktop PC with chopped off corners and a protruding front grill, which give it an industrial, almost military look marking it out immediately as a gaming PC. You also get a full-size transparent side panel, through which you can see the internal components illuminated by blue LEDs which also shine through the grille at the front. This is the Corsair Carbide SPEC-01 system case we’ve seen housing gaming PCs for some time now. You’ll either love it or hate it.

Visible through the window are the large heat pipes of the graphics card, and the black tubing of the Corsair Hydro H55 liquid-based CPU cooler keeping the Intel Core i5-6600K in check. In this system, the CPU has been pre-overclocked from 3.5GHz to 4.2GHz. This is a significant increase in speed, albeit somewhat unambitious alongside the 4.4GHz and even 4.5GHz systems challenging it in our Skylake gaming PC group test.

The CPU is teamed up with 8GB of 2133MHz DDR4 RAM and installed in a Gigabyte Z170-HD3 motherboard, where it’s supported by a 120GB Kingston V300 SSD and a 1TB Seagate hard drive.

This motherboard does the job, but is a little short on features. It supports 2-Way AMD CrossFire technology to allow the installation of a second graphics card, but the second PCI Express x16 slot is limited to x4 speed which will hamper performance. It doesn’t support USB 3.1 either. By contrast, Mesh’s Elite Skylake PCA features the GA-Z170X-Gaming 3 motherboard which rectifies both of these omissions in a system costing the same price as the CyberPower Infinity X55SE.

This PC is unusual since it’s the only Skylake PC we’ve seen so far that uses an AMD graphics card, rather than the more popular choice of an Nvidia GeForce GTX 970. In this case CyberPower has selected an AMD Radeon R9 390 card from VTX3D. These cards are matched price-wise with the Nvidia GTX 970 cards, but oofer double the RAM, at 8GB, and offer rather different performance characteristics depending on which games you choose to play.

In our tests, the Cyberpower Infinity X55 SE trades places with Nvidia-based PCs depending on which game test we’re running, but generally performs well, especially at Alien Vs Predator. It does come in behind the Nvidia boards at several other tests, but its extra RAM capabilities also allow for larger textures to be used and will require slightly different tweaking of game settings to achieve optimal performance.

Future games are also likely to make much more use of video RAM, which also plays to the Radeon’s strengths. One disadvantage of this card, however, is power consumption. When running flat out, this system consumed 520W of power – somewhere in the region of double that of competing PCs built with Nvidia graphics cards. Thankfully, Cyberpower has included a beefy 750W Corsair Builder Series PSU to make sure it gets all the juice it needs. Unfortunately, the Infinity X55 SE is also the loudest PCs of the group – often the consequence of high power consumption which leads to increased heat output and faster fan speeds.