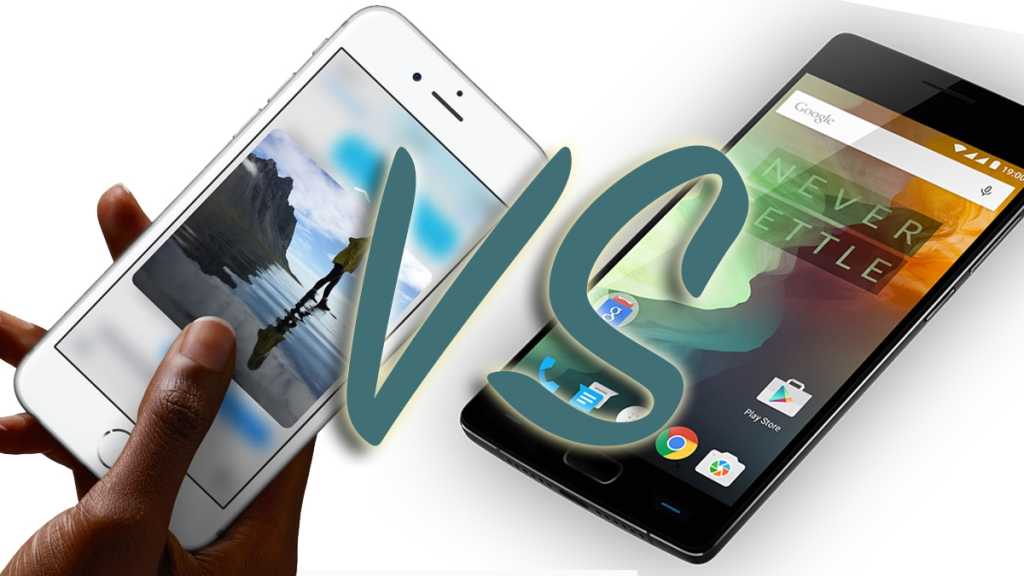 The OnePlus 2’s killer feature is that sub-£300 price tag, which makes it very tricky to justify spending close to or more than double that on an iPhone. The OnePlus 2 offers specs and features that far exceed expectations for its price tag, but opting for the iPhone 6s will get you a device that’s more gorgeous to look at, offers an impressive 3D Touch display and has an operating system that’s already loved by many.

The OnePlus 2 has already proven to be massively popular, and it has been dubbed the “2016 flagship killer,” but should it scare Apple? We investigate in our OnePlus 2 vs iPhone 6s comparison review.

OnePlus is a relatively new company compared with the likes of Apple, but it’s going from strength to strength, with fans lining up for hours to get their hands on its new smartphones in a very familiar manor that we’ve grown to associate with Apple. OnePlus is the underdog and Apple is far from it, which makes it a big contender that’s appealing to a very different but equally passionate group of people.

The iPhone 6s was launched in September and is available to buy from Apple itself as well as most carriers, although you might find you’ll have a bit of a wait if you fancy the new and popular Rose Gold model.

The OnePlus 2, on the other hand, is trickier to get hold of because the company has a system that requires you to register your interest for an invite, and once you’ve got that invite you can go ahead and order the phone. It’s a clever way for the company to manage its stock but it can also be frustrating if you want to buy yourself a new smartphone quickly.

It also means you’ll have to shell out the full price of the handset, as it’s not available on contract through carriers. You’re looking at a price of £239 for the 16GB model or £289 for 64GB, which is a much more appealing price than the iPhones, and by reading on you’ll notice that that low price tag doesn’t come at the expense of specs. If you compare the two 64GB handsets, you’ll notice that you could actually buy two OnePlus 2s for the price of one iPhone 6s and still have some cash left over, so it’s not a decision to take lightly.

You’re probably already quite aware that the iPhone 6s is slim, sleek and stylish, and the addition of the new Rose Gold model is proving to be a big hit. It’s made with anodised aluminium and has soft curved edges that make it a dream to hold and use.

The iPhone 6s is also available in Silver, Space Grey and Gold. It offers a 4.7in display which we think is a perfect size, but there’s also the iPhone 6s Plus which has a 5.5in display like the OnePlus 2. Also see: Best MiFi 2016.

The OnePlus 2 offers a curved design on the back, so despite its bigger size it’s still comfortable to hold and easy to grip. It weighs 175g compared with the iPhone 6s’s 143g, though, and is much thicker at 9.85mm compared with 7.1mm for the iPhone 6s, and it’s certainly noticeable.

What we like about the OnePlus 2, though, is the ability to customise it with StyleSwap covers that include Bamboo, Rosewood, Black Apricot and Kevlar, and we already love the standard Sandstone Black plate it comes with.

It’s when you start digging deeper to take a look at the technical specifications and the feature set on each of these phones that the differences become less obvious and the difference in price tags becomes quite hard to justify.

On the outside, you’ll find a 4.7 IPS display with a resolution of 1334 x 750 pixels for the iPhone 6s, equating to 326ppi. That makes for a crisp, clear and bright display, but the OnePlus 2 beats it with a pixel density of 401ppi thanks to a 1920×1080 resolution across a 5.5in screen. That’s nothing too major, though – you’ll find both screens perfectly satisfactory (but not quite in the same league as the likes of the Samsung Galaxy S6 or LG G4).

The iPhone 6s boasts Apple’s own 64-bit A9 processor with an M9 motion co-processor to help boost efficiency and 2GB RAM. You’ll find that it can handle pretty much anything you throw at it and you’re unlikely to experience any lag.

Both have fingerprint sensors built into their home buttons, and they’re both super-speedy now that Apple has introduced Touch ID 2.0 for the iPhone 6s.

The One Plus 2 surprisingly lacks NFC, though, while Apple uses an NFC chip limited to Apple Pay only in its iPhone 6s. It does have two SIM card slots, though, and both support 4G connectivity, which is unusual.

Other connectivity features include 802.11ac WiFi, Bluetooth 4.1 (OnePlus 2) or 4.2 (iPhone 6s) and GPS. The iPhone 6s charges using Apple’s own Lightning power cable, but the OnePlus 2 is the first smartphone to boast a reversible USB Type C port for charging, a standard that we expect to see rolling out across all smartphones including Apple’s in the future. Apple is already using USB-C for its MacBook.

You can expect a better battery life from the OnePlus 2’s big 3300mAh battery, compared with the 1810mAh battery found in the iPhone, though some of that extra battery power will be sucked up by the bigger, better display.

Where the iPhone 6s really shines is when you start discovering its 3D Touch display, which can completely change the way you interact with the smartphone once you’ve become accustomed to using it. You can find out more about 3D Touch and what it does here, but in a nutshell it can detect pressure to distinguish between a tap, press and push, carrying out a different action depending on which you use.

The OnePlus 2 doesn’t have any features that are quite as exciting as that. It has an Alert Slider on the side that lets you switch between three notification profiles: None, Priority and All, but aside from that you’re looking at a pretty standard top spec smartphone.

Of course, we can’t forget about cameras, and both the iPhone 6s and OnePlus 2 have impressing offerings.

The iPhone 6s has a 12Mp camera on the rear with a dual-LED True Tone flash, and the pixels are 1.22 microns in size to improve quality. The OnePlus 2 has a 13Mp snapper with optical image stabilisation and even laser autofocus for fast and sharp point-and-shoot capaibilities.

The front facing camera on the iPhone 6s is 5Mp, as is the OnePlus 2’s.

We love Apple’s iOS 9, which is intuitive, good-looking and smooth, but offers little in the way of customisation. If you’re already a Mac or iPad owner, or have an older iPhone, you’ll find that it syncs seamlessly and it’s a breeze to switch devices.

The OnePlus 2 offers a more unfamiliar operating system called Oxygen OS, which is a custom version of Android Lollipop 5.1.1. There’s a feature called Shelf that displays popular apps and widgets, and lots of customisation options to help you tailor the smartphone to you.