We prefer the design of the One A9 to the flagship One M9 and it does have a decent fingerprint scanner. However, these things combined are not enough to justify buying it instead of its bigger brother or various even cheaper Android rivals. HTC has made a nice phone in the One A9 but its price tag is hugely misjudged.

Most new smartphones for the calendar year have launched by now but HTC has a new one for you to contemplate this Christmas. Here’s our HTC One A9 review. See also: 20 best phones.

As per the leaked information, the Taiwanese firm has unveiled a new smartphone which will sit alongside the One M9 in the flagship range. The One A9, codenamed ‘Aero’, is ‘the smartphone that gets all the important elements right’, according to the firm.

HTC One A9 review: Price and competition

HTC doesn’t have an official price for the One A9 on its website, instead pointing towards retail partners. The odd thing is that they all have different prices for the phone ranging from £419 all the way up to £479.

A £60 difference at launch is a bizarre situation, but worse is that this is a much higher price than we’d expected for the HTC One A9. Find more details in our HTC One A9 release date, price, specs article

We know it’s brand new and the price will drop over time like most phones, but for now it means that the flagship One M9 is obtainable for far less. You can pick it up from Amazon for £369 and it’s probably even less if you hunt around.

Since the A9 is by no means a successor to the M9, we’re not sure how HTC is thinking consumers will pick it instead. Also see: Best MiFi 2016.

When you compare it to others on the market, things look even worse with similarly spec phones like the Google Nexus 5X, OnePlus 2 and Motorola Moto X Play all available for much less – £339, £239 and £279 respectively.

HTC isn’t off to a great start, but maybe the One A9 can sway you despite its frankly over the top price tag.

HTC One A9 review: Design and build

Price is an important factor when it comes to any product but let’s talk about what the One A9 is like to live with should you splash out on one.

Let’s tackle the elephant in the room straight away. The One A9 looks very similar to the iPhone 6/6S and that’s something no one can deny. We don’t want to debate about whether HTC copied Apple or not here (you can in comments though) and the firm quite rightly points out that it started its uni-body aluminium design back in 2013 with the original HTC One – when the iPhone was pretty square in shape.

The shape feels nice in the hand, although a little slippery, and the One A9 is nice and thin at 7.26mm. A weight of 143g is fairly light, too. Both better than the M9 if you’re pondering between the two.

We took a look at a range of colours with Carbon Grey and Opal Silver being the two at launch, however, Deep Garnet and Topaz Gold will also be available before the end of the year. We love the red model but gold seems to be the most popular at the moment in the phone world. These may well be exclusive to certain networks or retailers.

Compared to the One M9, the main addition here is that button below the screen, which is a fingerprint scanner, not a push button. It’s similar to the OnePlus 2‘s in that you can use it to unlock the phone and as a home key.

Build quality is excellent and it’s the little details which combine to make this a really desirable phone. For examle, the ridges on the power button making it not only easier to use but also find with your finger. We also love the smooth edge of the glass which sits perfectly flush with the metal.

It’s amazing how a slightly sharp edge really gets on your nerves over time but there’s nothing like that here.

HTC One A9: Hardware and specs

The One A9 keeps up with HTC’s flagship phone on the screen with the same size and resolution – 5in and Full HD. We’re impressed with the screen which is crisp, offers good viewing angles and provides popping colour and excellent contrast thanks to the AMOLED technology.

The thing is, you shouldn’t really need to pay upwards of £400 for this quality of screen – or we should say, don’t have to.

You’re going to get lower grade specs under the covers with the One A9. It has a Qualcomm Snapdragon 617 octa-core processor, 2GB and 16GB of internal storage. Luckily there’s a Micro-SD card slot which can, HTC tells us, take up to 2TB.

Benchmark results are not great, but don’t read into them too much. The One A9 performs perfectly well day-to-day. That’s not to say it’s the nippiest around because it’s not but it equally didn’t leave is frustrated with waiting for things to load or with scroll lag. As usual, it’s the camera app which can take a couple of seconds to boot.

Although you get a fingerprint scanner, which works quickly and accurately, HTC hasn’t put its BoomSound front facing speakers in which is a shame. The One A9 does support High Res 24bit audio though including upscaling and a DAC (digital to analogue converter).

Going back to the fingerprint scanner briefly, the positioning isn’t the most convenient as we prefer rear mounted ones or the Xperia Z5’s which is integrated into the power button on the side. This way you finger or thumb fall naturally on the scanner instead of having to reach for it.

Next to the bottom facing speaker – which provides average sound quality – is a regular Micro-USB port rather than the new reversible Type-C. This is becoming more common, but not common enough for HTC just yet.

We can see HTC’s point on the matter as it is currently awkward to have Micro-USB cables everywhere but an incompatible new connector. However, it would be future proofing once the pain of the transition is complete.

That said, the phone does support Quick Charge 2.0 for topping it up quickly. With the battery fully topped up, you’ll get pretty good battery life. Our Geekbench 3 test resulted in a respectable time of six hours and 24 minutes which put it in the top bracket of performers here.

Other connectivity includes NFC, 11ac Wi-Fi, Bluetooth 4.1 with aptX and 4G LTE support – exactly what we’d expect for a phone this expensive. Wireless charging would be nice though.

Last but not least on the hardware side are the cameras. At the front is the same UltraPixel camera as found on the M9 which is pretty good (but by no means the best). The rear camera is a 13Mp Sony sensor with a dual-tone LED flash.

Quality is very good and a bonus is the One A9 features optical image stabilisation, an aperture of f/2.0 and support for shooting in RAW. Once again, the problem here is that you can get phones with similarly decent cameras for a lot less. HTC is touting hyperlapse video as a key feature which can be applied to any video in your library. 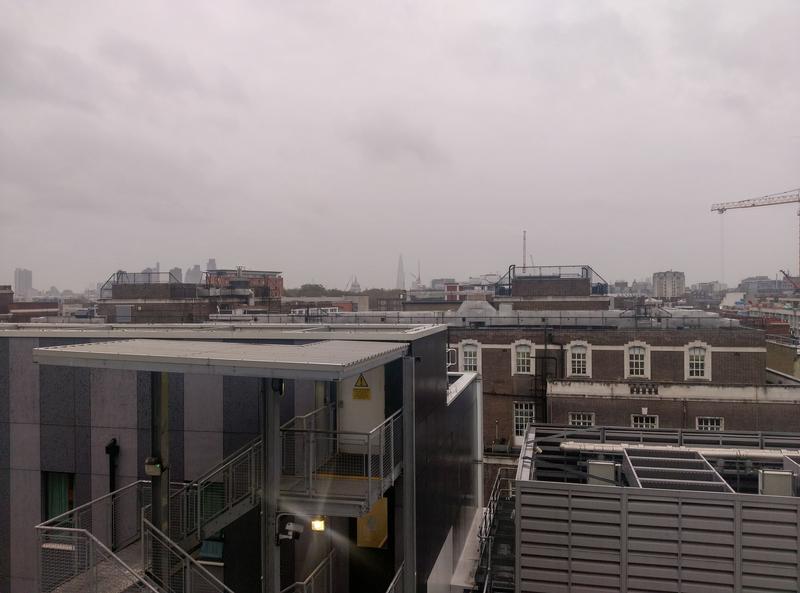 HTC One A9 review: Software and apps

Coming later in the year than other smartphones has an advantage – the One A9 comes with Android 6.0 Marshmallow making it the first non-Nexus device to do so. There will be no wondering or waiting around for the upgrade here – until the next version anyway.

It’s a very different experience to a Nexus devices, though, as the phone also comes with HTC’s Sense user interface. We’re not saying that’s a bad thing and existing HTC users might not want it any other way. We’ve all got our favourite and not so loved Android skins.

That said, HTC does use stock Android elements though such as the drop down notification bar, including quick settings, and the card rolodex style recent apps – so Sense is closer to stock Android than previously.

Running Android 6.0 Marshmallow also offers other advantages such as ‘adoptable storage’ meaning the SD card can be viewed as internal storage, Doze mode for better standby battery life and Now on Tap for accessing Google Now whatever you’re in the middle of.

Sense looks stylish on the One A9 and you’ll get the same experience as the M9 with features such as Themes (HTC says seven million have been downloaded) and Sense Home, the widget which displays different app icons, as well as suggestions, based on where you are. BlinkFeed and Zoe are still key parts of the system.

HTC One A9: Specs