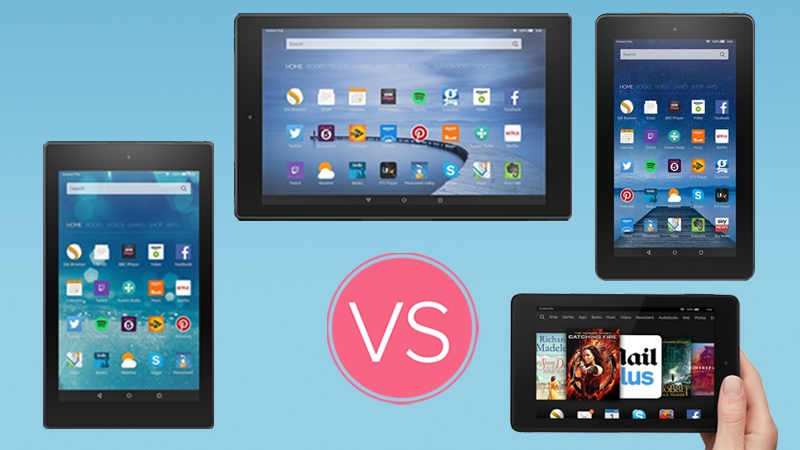 If you’re happy to have a 7in screen, the £49 Fire is by far the best deal, and if you can use six, you can buy five and get one free making them even cheaper. It’s also available as a Kids Edition with a year’s subscription to the Fire for Kids service and a warranty that covers accidental damage. The Fire HD 6 is now the ‘old’ model and has no microSD card slot, so it’s hard to justify the extra expense over the £49 model. If you want the bigger 8 or 10in model, our pick would be the HD 8 as it has the same specs – even screen resolution – as the bigger version, but is a significant £40 cheaper.

Amazon has launched a new range of tablets for 2015 and kept its 6in model from last year. Here we compare the new 7, 8 and 10-inch Fire tablets along with the HD 6 so you can decide which to buy. Also see: Best new tablets coming in 2016.

Starting at only £49, the new 7in Fire tablet (it’s just called ‘Fire’) is remarkably cheap. We’ll look at the corners cut later, but for many people this is a real bargain. You’ll have to pay an extra £10 with any of Amazon’s tablets to remove the ‘special offers’ on the lock screen.

The smaller 6in HD 6 costs £30 more which sounds wrong, but it has a better screen, processor and comes in a range of colours.

Before you buy an Amazon tablet, it’s important to understand that it is not an Android tablet. It runs a heavily customised version of Android called Fire OS, the current version is 5, codename Bellini.

This offers easy access to all things Amazon, from shopping for physical goods to Kindle books, movies and TV shows on the Prime Instant Video service, plus games and apps from the Amazon Appstore and the new Amazon Underground (which is for truly free apps with no in-app purchases).

There is, however, no easy way to get Google apps such as YouTube, Gmail, Google Maps and others. You can access Gmail using the built-in Mail app, and watch YouTube videos through a third-party app or via the built-in Silk web browser, though.

You also can’t access the Google Play store, and while the selection of apps and games in Amazon’s own store is pretty good, it lacks the breadth of choice and some popular apps you’ll find on Android tablets.

As we’ve said many times in the past, Amazon tablets are great for undemanding users who won’t really want to get the latest games and apps and are happy with a simple web browser and email. They’re also good if you have an Amazon Prime subscription as you can watch films and TV shows on the included Instant Video service. Some films and shows aren’t included so you’ll have to buy or rent them, but the selection is reasonably good.

Amazon also has a music streaming service which is part of Prime (which costs £79 per year and gives you one-day delivery on items on Amazon’s website marked with a Prime logo). You can read our Netflix vs Amazon Prime Instant video comparison for more detail.

In terms of software features, it’s the same across all four tablets. The interface changes slightly because of the different screen sizes, but you don’t get extra features on the more expensive tablets. The 24/7 Mayday support service is available on all of them.

If you’re thinking of buying a Fire for your child, then the Fire For Kids app is a great way to limit what they can and can’t see (such as no internet access) and you can set different time limits for reading and using apps / games. It’s a good system that we like for younger kids. If you want to you can buy the 7in model as a Kids Edition which has a better warranty and a year’s subscription for the Fire For Kids service that lets them access range of books, apps, games and videos for free.

Apart from the older Fire HD 6, all the new range have microSD card slots so you’re not stuck with a limited amount of storage as you were in the past. This is a real advantage, especially on the £49 Fire which has around 5.5GB of usable storage out of the box.

All four tablets have front and rear-facing cameras. None are exceptional, and the two cheapest models are sub-standard. It’s best to use the cameras only for video chats and not buy them hoping to take good photos or videos.

All four have acceptable performance and good screens. However, they’re built to a price and don’t rival more expensive tablets. For example, the £49 Fire has a low resolution of 1024×600 pixels. But the fact that the screen has good colours and viewing angles offsets this and means most people will be perfectly happy with it. And you’ll struggle to find another tablet at this price with as good a screen.

Oddly, the 10.1in version has the same 1280×800 resolution as the 6- and 8in models, so the pixel density gets lower the more you spend. In fact, aside from the larger screen size and the option of 16- or 32GB of storage, you get very little extra with the Fire HD 10 – and it’s available in only black or white. The HD 8 is £40 cheaper with essentially the same specification and a choice of black, blue, tangerine and magenta colours.

It’s easier to see how the four models compare in the table below.