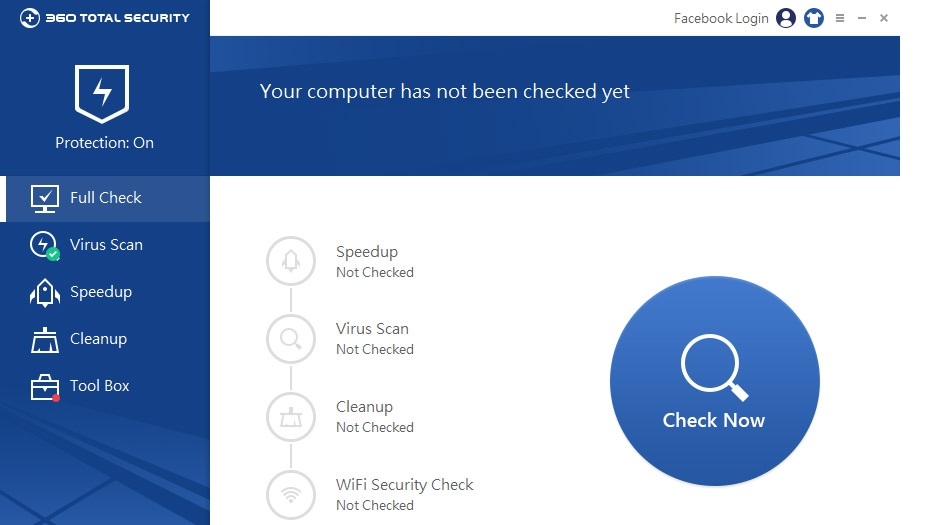 If you want the extra features that Total Security 2016 offers over and above a plain free antivirus product, then Qihoo isn’t a bad choice. And if you do install it, you should head straight into the settings and enable the Bitdefender scanner.

Although Qihoo (pronounced Chi-hoo) provides two products under the 360 brand – Total Security and Total Security Essentials – both are free. So unless the performance of your PC or laptop is limited, there seems little reason not to install the full product, which you can get from www.360totalsecurity.com

The Hong Kong / Chinese company boasts over 500 million customers in China, so although it is relatively new to the UK market, it already has a proven track record. It’s a slickly designed suite with a modern interface which is clear and offers sufficient information and control settings to easily setup and use the software.

Qihoo 360 Total Security offers a complete suite of modules, though not perhaps the traditional ones in an IS suite. There’s no antispam or online storage, for example, but there is a sandbox for trying new applications, protection against browser scams and against somebody hacking your web cam and applications to clean up junk on your system and select what gets loaded when you start your system.

Another novelty of the software is that it uses multiple scanners, including the Avira and Bitdefender engines and claims the combination gives increased security. It’s not the only IS suite to use this approach, but it has managed to choose two of the highest rated AV engines on the market, which stands it in very good stead.

The initial scan of our 50GB file basket was very slow, taking 2 hours 15 minutes to examine 64,742 files. This gives it a scan time of just 8.0 files per second. Again, this doesn’t matter much, if subsequent scans are quicker and the rerun of the test, surprisingly, scanned over 900 more files in less than half the time.

In our copy test, it took 13 seconds longer to copy a 1GB file between drives when there was a system scan running than without, an increase of 27 percent. This is in the middle of the range recorded for the group.

There are no AV-Test results for this year, nor from AV-Comparatives or Virus Bulletin, three key independent security software testing sites. This is because, earlier in 2015, Qihoo ‘did a Volkswagen’ and primed its suite with different settings in the versions they supplied for testing.

For example, it switched on the Bitdefender engine by default and turned off its own, increasing the levels of detection under test. Bitdefender is one of the very best and fastest detection engines available, but Qihoo turns it off by default in the version it supplies publically because, as it says in its official response to the cheating claims, it has to assume users will be running on lower power computers, and its own engine is less demanding.

These defaults can be overridden in the public version, so the program can be set up to offer the combination of features any customer wants. You may be happy to do this, to get the best out of a free product, but the fact that Qihoo has seen fit to tweak its software hasn’t gone down well with the test houses. It has cast a shadow over the honesty of the company, in a product area where trust is key. All it needed to do was offer a choice to the user upon installation – hopefully it will do this in the next update.