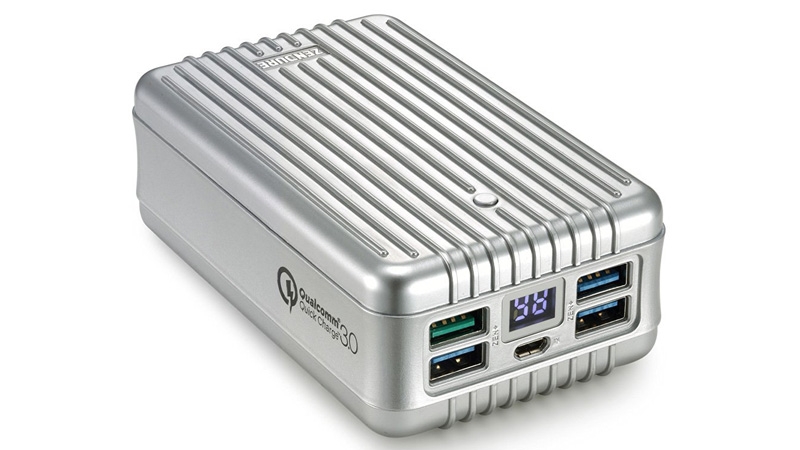 Incredibly well designed with excellent features including passthrough charging and an LCD panel, a tough build and huge amounts of power, that £69.41 asking price doesn’t look so high after all. The only thing we can fault Zendure on is the fact its three Zen+ ports can’t simultaneously run at full speed. However, the new Quick Charge 3.0 input and output, plus increased capacity are very welcome additions, making this an excellent buy if your power needs are great.

We’re big fans of Zendure‘s  power banks, ultra-tough, ultra-compact, stylish and loaded with features. The A8 QC sits at the top of Zendure’s line-up, a monster power bank for those with heavy-duty portable power needs or extended trips away from mains power. We review the Zendure A8 QC. Also see: Best power banks 2016.

The Zendure A8 QC costs £65.41 from Amazon UK. That sounds like a lot of money for a power bank, but it’s not so much when you consider what you’re getting for your money.

Note: Zendure has recently updated its Zendure A8 Pro to this Zendure A8 QC. It’s increased the capacity from 25,600mAh to 26,800mAh (which is nearly as high as you can go for taking on a plane), and it has replaced one of the four Zen+ outputs with a QC3 output. This partially deals with both of our criticisms originally levelled at the Pro: that it doesn’t support Quick Charge technology, and that its maximum 3.1A output is shared across all four ports. This 3.1A output is still shared between all the Zen+ ports, but here there are just three- rather than four.

With a 26,800mAh capacity and a higher-than-industry-average efficiency of 80 percent, you can expect 21,440mAh or juice for powering your  phone(s) and/or  tablet(s) away from the mains. To work out how many times you’ll be able to charge your particular device you divide 21,440mAh by the battery capacity of your phone or tablet. My Samsung Galaxy S6 (2,550mAh battery), for example, will receive 8.4 charges, while an iPhone 6s (1,715mAh) would manage 12.5 charges – that’s an awful lot of power to keep you going away from a mains outlet. Also see: Best MiFi 2016.

That’s assuming you want to charge only one mobile device, of course. The Zendure A8 QC has three super-fast-charging (3.1A/15.5W) ports with Zen+ intelligent device-recognition tech that delivers the optimal charge, plus a new Quick Charge 3.0 output. Also see:  How to improve smartphone battery life.

It’s worth pointing out, however, that the A8 QC’s maximum power output is only 3.1A/15.5W, which means it can not simultaneously support more than one of those three Zen+ outputs at full-speed. While it will charge all three attached devices, it will do so slower than if it had fewer attached. (The new QC3 port is separate and has its own 18W maximum output.)

With such a huge amount of power to hand, the Zendure A8 Pro could previously take a long time to refill over its 1.5A/7.5W Micro-USB input – up to 20 hours from empty, or longer if you have an underspecified charger (as is standard with power banks a mains charger is not supplied in the box and you should use that provided with your phone or tablet). However, this has also been upgraded on the A8 QC, and can now charge in around 10 hours using a Quick Charge 3.0-specified charger. The ability to fill up that much power in that little time is simply outstanding.

Some more good news: the Zendure supports passthrough charging, which means you can plug it into the mains and a phone or tablet into one of its outputs and both devices will charge. The A8 QC will prioritise re-filling attached devices before re-filling itself, but the exact timings will depend on how much power those devices drain. Also see:  Best desktop chargers 2015.

Once that power is in the bank it stays in the bank, ready for when you need it. Six months after charging your Zendure, you should find 95 percent of its capacity remains even if you haven’t used it.

One feature we particularly like in the A8 QC, and one that we’ve not seen before in Zendure power banks other than in its predecessor, is the digital LCD screen. By pushing the small button on the front of the Zendure you can get an exact readout of how much capacity remains, so you won’t get caught short. This is a much more user-friendly solution than the four LEDs used by most power banks to show remaining charge.

That’s all this power button is used for. The Zendure will automatically begin charging a mobile device as soon as it is plugged in, and unlike many other power banks on the market there’s no built-in LED flashlight for it to activate. For a device of this size we really don’t see an issue with that – it wouldn’t make the most practical of torches.

And it is a large device – as you might expect, given the capacity. But for a 26,800mAh power bank, we think its 481g weight and 119x74x40mm dimensions are impressive – more impressive still is that Zendure has managed to squeeze in more battery power into a chassis the same size as that used for the A8 Pro. You might not want to slip it into a pocket, but throwing it in a handbag or rucksack is no problem. Also see:  How to charge your phone or tablet faster

The silver A8 QC features the same ribbed, ultra-tough design as the smaller models in the Zendure series, encased in a crushproof PC/ABS composite material with dual-injection molding and a shock-absorbing central belt. Zendure has demonstrated its power banks’ ability to withstand the weight of a McLaren Spider, so we’re fairly certain you won’t need the included carry bag for anything other than keeping with it the grey Micro-USB cable.

Aside from the aforementioned LED torch, the only thing really missing from this power bank is a USB-C input/output. This is not the standard for power banks just yet, though, and Micro-USB is still by far the most popular connection type. But we’re really grasping at staws here: the Zendure A8 QC is an excellent power bank.