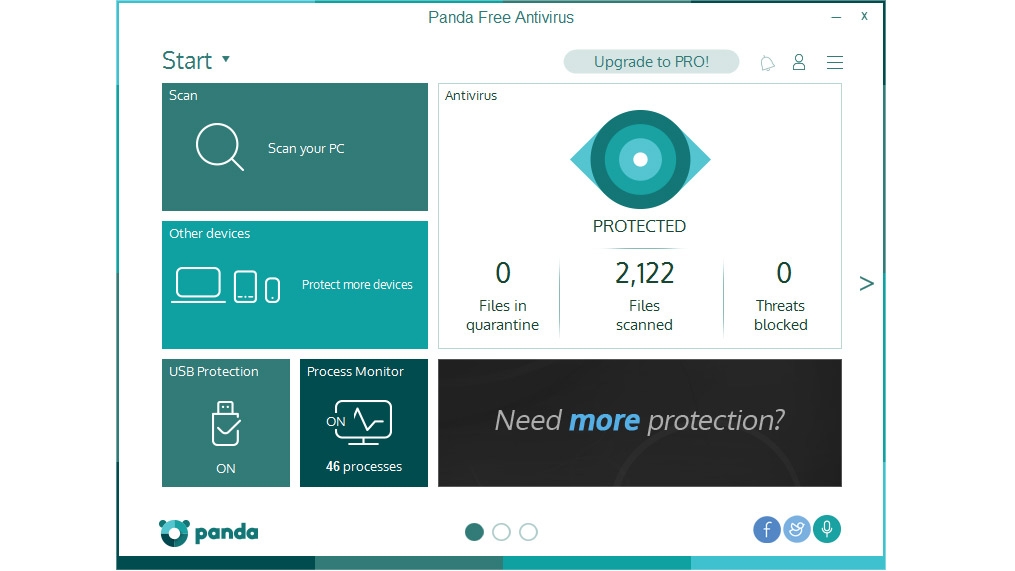 Panda is one of the leading antivirus providers and this free offering includes a couple of interesting extras. We were surprised at the time it took for both the initial and follow-up test scans, but its protection levels are sound and it’s very easy software to set up and forget.

Many of the big names in antivirus software offer free versions, but they’re not always obvious when you visit their website as they’d prefer you to pay for a more comprehensive security suite.

Here’s our review of Panda’s Free Antivirus 2016, which you can get for free by clicking here from Panda’s website.

Panda has revamped the look of its antivirus software and this goes for the free product as well as the paid-for ones. The main screen is a modern design with tiles for scanning statistics, a link to the dashboard, USB protection and process monitoring.

These last two are unusual in an AV program. USB protection prevents apps from running automatically when you plug in a USB device and analyses file contents for malware, while process monitoring provides a simpler interface for the kind of info the Windows Task manager offers.

Panda makes considerable claim for running most of its scanning in the cloud and having a very light touch on the PC platform its run on. This is something more and more of its competitors are now copying, but we didn’t notice any evidence of a low impact in our tests.

A 50GB scan took 1 hour 57 minutes for a scan of 455,748, the second longest of all the free antivirus programs we’ve tested recently. This is not an undue worry for a first scan, as it’s during this task that most AV programs create a fingerprint of the files and know which ones not to retest unless they’ve undergone change between scans.

What was more surprising was that our secondary scan, of the same set of files, still took 1 hour 17 minutes to examine 426,178 files. This is a clear indication that not much fingerprinting is being done and the software is still retesting a lot of files.

Copying a 1GB file with and without a background scan running took 51s and 41s, respectively, a 24 percent increase and very close to that from Bitdefender’s free antivirus. Most people won’t notice that they have AV software running on the system, except when a scan is being run, so the results from our test should be read alongside those from AV-Test, which looks at the difference between AV software sitting idle on a PC and it not being installed.

The Protection category, arguably the most important in any antivirus program, produced one of those perfect scores. When you look at the breakdown between widespread and zero day malware, you see a perfect 100 percent in both categories and for both months of the evaluation.

The Usability score, measuring false detections, warnings and blockages of legitimate software, also produced a perfect 6.0, though it generated three false detections out of the 1.1 million samples it checked.

The product’s Performance score, which looks at any performance hit, produced a slowdown of two seconds during the tests, against an industry average of three seconds. This is what prevented it reaching the full 18.0/18.0.