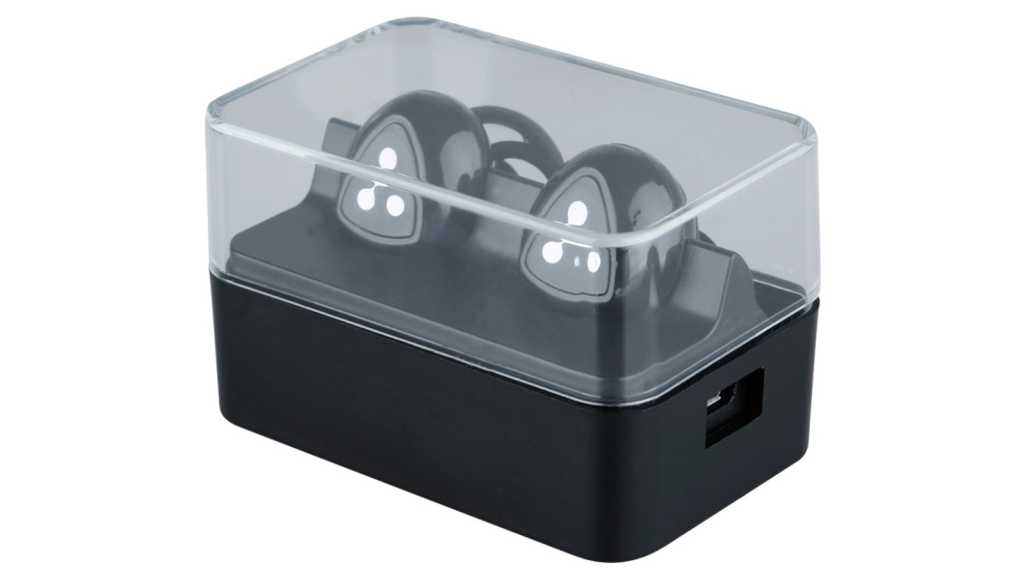 For under £50, you probably wouldn’t expect too much from a pair of Bluetooth headphones, but the D900 are by no means the cheapest option. But if you really want to go wire-free and are prepared to sacrifice a little sound quality, the D900 might just be up your street.

Syllable is a headphone manufacturer based in Shenzhen, China. It makes various Bluetooth headphones, but these are the first we’ve seen with no wires at all. Here’s our Syllable D900 review. See also: Best budget headphones under £50.

Most Bluetooth headphones have a headband or at least a wire joining them, such as the SoundPeats Sports Q9, but the D900 has none at all. Each sits in your ear like a Bluetooth headset, and has its own battery and Bluetooth hardware.You can buy the D900 from Amazon.

Syllable says the batteries last for six hours, but the clever part is that they come with their own recharging station that doubles as a case. Charge up the case’s internal battery using a microUSB cable for around three hours and there’s enough power to recharge the headphones six times.

The headphones come with (larger) black silicone tips and (smaller) white tips. We found the black tips were the best fit and the hooks help to keep the buds in place without falling out, after you’ve given the buds a small twist towards the front. Syllable recommends the D900 for use in the gym and says they’re ‘sweat-proof’.

If neither of the sets is a good fit, you’re stuck for other options. However, those who tried them out in the office found they generally fitted well and since the buds are so light and have no wires dragging them downwards, they stay in and are fairly comfortable.

The pairing process is as easy as any Bluetooth headphones, although it’s confusing as each earbud shows up separately in the list of pairable devices. You must pair only one, then pair the earphones to each other.

The manual has exceptionally bad English which means we had to resort to you YouTube video which explained that you have to press the button on each bud four times, holding down for a few seconds on the last push. Holding the buds close together allows them to pair. Skip this part and you’ll get audio out of only one, but not both.

There’s also no mention of how the charging process works, or what the LEDs mean. (Syllable’s website does explain that the case’s red LED means charging, and blue means charging complete.)

The case lid holds the buds tightly against the charging contacts, but you need to first remove the tiny piece of clear tape put on by the factory before they’ll charge – very easy to miss, especially as the manual doesn’t mention that either. Also, it’s very easy for the buds to be misaligned so you need to check that the faint red charging light is on for both buds once the lid’s on.

A single press of either button pauses and plays music, while a double press redials the last number you called. We couldn’t get this to work on an iPhone 6, though. If you get a call while listening to music, you can answer it with a single press, or reject with two presses.

If build quality is average, sound quality is a notch below that. As long as you can get a good fit – and therefore good seal – with one of the ear tips you’ll get great bass. Overwhelming bass in some cases.

We played our usual variety of rock, metal, jazz, pop, dance and classical and found the D900 will appeal most to dance and trance music listeners – ideal for the gym. The powerful bass and clear vocals suit dance tracks, but when it comes to busy rock music it seems vocals and instruments appear to trip over each other and the sound can become crowded and muddy. A wide sound stage there is not – high frequencies are a little lacking too.

There’s no lack of volume, but turn them up too much and the sound becomes harsh and painful to listen to.

But with the right music and volume, the D900 can produce decent audio. Range is actually better than Syllable claims. We managed 25m with line-of-sight before the sound started to cut out (paired with an iPhone 6S Plus), and had no issues with choppy audio within that range.

As a hands-free headset, though, the D900 isn’t great. Audio comes from the right earbud only and while you won’t sound too distant to the person on the other end, the built-in microphone isn’t particularly high quality. We had no problems with echoing, so the noise cancellation appeared to be doing a decent job.