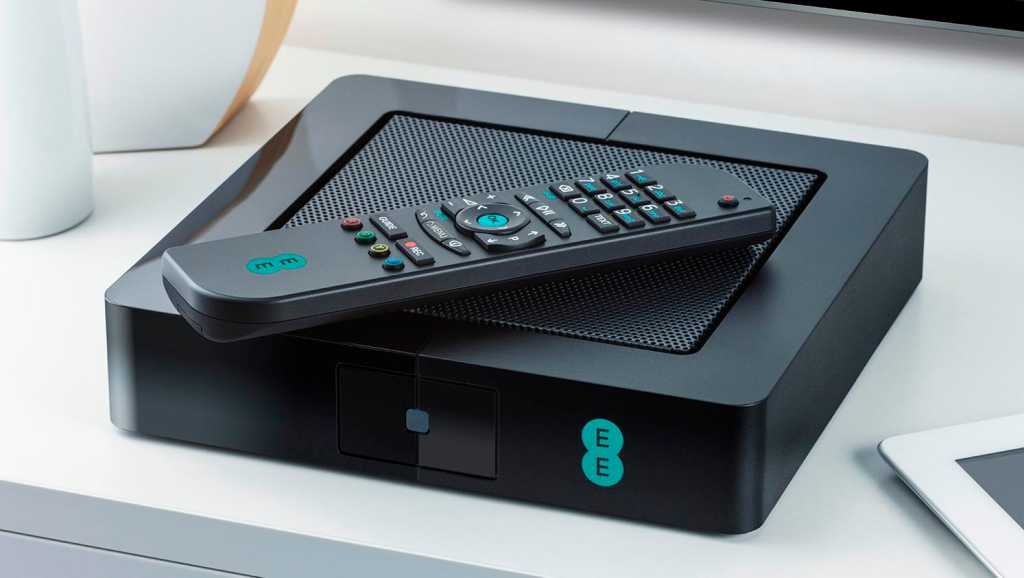 If you’re happy to be an EE customer for TV, broadband and phone, the EE TV box is a good deal. This box offers a great Freeview experience and has a large 1TB drive. Key features include the ability to stream to mobile devices around the house at the same time so will be a great choice for families wanting to watch different things. However, it lacks some big name on-demand services so this is where YouView beats it.

Update March 2016: EE has announced new features for the EE TV including the ability to manage and set recording while out of the house, like YouView. Furthermore, Recordings To Go allows users to download any Freeview content to mobile devices as soon as it has aired. Downloads will have no expiry date, either.

An outspoken black box, the EE TV is available from £4.95 per month when you sign up to EE TV and Home Broadband. This jumps to £12.95 per month after 6 months and there’s a line rental of £16.40 per month, too. If you’re already a customer then you’ll need to sign up to a new 18 month contract.

If this sounds like a lot then you do get the EE TV box itself for free and the price includes your broadband and your phone line so it’s not so bad.

The EE TV is a Freeview box so if you have a regular TV aerial then you get non-subscription access to more 70 regular and 13 HD channels – just remember you still need a TV license.

Set-up is quick and simple and you can choose to connect the box to the internet vie Ethernet or Wi-Fi. What you will also need to do is make an important choice. One of the tricks the EE TV has up its sleeve is the ability to record four channels simultaneously but you need to choose this or a feature called Replay.

Replay allows you to choose up to six favourite channels and the box will make programs on these channels from the last 24 hours (you can also choose 18, 12 or 6 hours) available to you. You can also start watching a show from the beginning if you happen to switch the TV on a little late. Both work really well and we’d recommend going for this option unless you really need to record more than two channels at once.

This is a different approach to YouView which allows you to watch anything from the previous seven days on the guide, but only if it’s available on a catch-up service and it will simply link you to the right place.

Speaking of catch-up services (and paid for ones), the EE TV box can’t match YouView on this front with a narrower choice. You get some decent offerings like BBC iPlayer, Demand 5 and Sky Now TV. Others include Deezer, Wuaki.tv, YouTube and Hopster but that means there are some key omissions such as ITV Player, All 4 and Netflix. YouView also has others such as UKTV and Quest.

Some of the blow is made up by the EE TV app which we’ll talk about in a bit.

Before we get to that, let’s look at the remote control and the user interface. The remote is compact, simple and effective, made from a comfortably soft rubber/plastic. There’s little else to say about that but the user interface is a somewhat more unorthodox.

There’s an EPG (electronic program guide) but this isn’t the regular screen on the EE TV. Instead you get a bright and colourful homescreen which is split up into sections horizontally – a bit like the Xbox user interface.

The main screen is Live TV where you get a large section showing you the last viewed channel plus others round the edge. You’ve also got screens to display On Demand, Recording and Replay (if you chose that option). All of which you can dive further into to get more details and control.

As you might expect, you can record whichever shows you want and put them on series record from the guide or just when you’re watching something. There’s plenty of space for recordings with a 1TB drive inside, just bear in mind that the Replay feature uses some space to work.

We found the box and interface nippy and responsive which is good but the EPG frustratingly loads the grid every time you move around – even if you scroll down a page and then straight back again.

One of the key features of the EE TV is what the app can do – which you can download on iOS or Android. Connected to the same network at the device, the app finds the box and you’re away. You get a similar interface to the one you use on the TV which means you can do a lot more than the YouView app which is essentially the EPG so you can send recordings to the box.

With the EE TV app you can watch live TV, watch recordings and make use of the Replay feature. And and any moment you can choose to switch to the big screen in Chromecast fashion – you can do it in either direction and it’s called ‘Flick’ and ‘Fetch’. Being able to watch all this content on your phone or tablet is a real boon and means you don’t need to worry about having the right app on board. It essentially gives you full access to everything you would do on the TV.

You might think that only one person can have this handy access but you can actually have up to four people streaming content to mobile devices at once which should be no, or at least fewer, arguments about what to watch. Each user can also have their own favourite shows and view recordings they scheduled so you don’t all need to browse the entire library every time.

The app also has controls for the box if you are watching on the TV, in case you lose the remote control (or want to fight over what to watch). We did find the app crashed a bit when we tested it on Android.