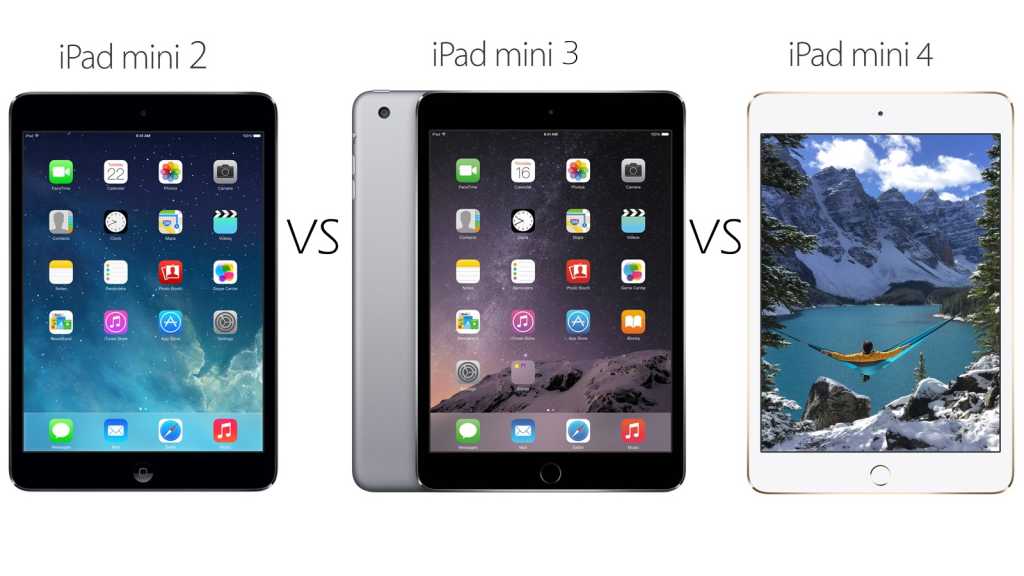 The iPad mini 4 is the “best” iPad mini, but that’s from a technical standpoint. If you’re happy to trade off performance, screen quality, camera quality, and a Touch ID sensor (plus the more subtle differences in the table) then the £100 saving on the iPad mini 2 means it could be the one for you. The upgrades arguably make the mini 4 worth that extra £100 and it will no doubt be a more future-proof purchase if you care about being able to upgrade to the latest version of iOS. We expect the mini 4 to get at least the next two versions – iOS 10 and iOS 11. The iPad mini 3 is only a good deal if you can find a refurbished model at a low price – i.e. not much more than the equivalent iPad mini 2.

The iPad mini is a bit like the child which gets all the hand-me-downs from an older sibling, but that’s not to say you shouldn’t buy one. The iPad mini 4 just inherited a load of great features from the iPad Air 2, and here we explain the differences between the iPad mini 2, 3 and iPad mini 4. Also see: Best new tablets coming in 2016.

Apple has stopped selling the iPad mini 3, which means your choice is limited to a mini 2 or mini 4 if you go into an Apple Store or look on Apple’s online store.

You can buy a refurbished iPad mini 3 from Apple’s website but prices and availability will change. An example is a 16GB Wi-Fi + Cellular model which costs £319.

Of course, you will also find refurbished or used models on ebay, Amazon and other sites.

iPad mini 2 vs iPad mini 3: What are the differences?

As we explain in our iPad mini 2 vs 3 comparison review, Apple didn’t really change much in the upgrade from the iPad mini 2. In fact, the main addition was a Touch ID sensor. But as we’ve said, there’s no 32GB version of the iPad mini 3 and Gold was added as a third colour option. Other than that, the two tablets are identical: they have the same screen, processor, battery, cameras and chassis.

iPad mini 2 vs iPad mini 4: What are the upgrades?

This year, there’s a swathe of changes in the iPad mini 4, although the upgrades are – as we said at the start – hand-me-downs from older devices.

The processor has been given a boost from the A7 to the A8 (that’s the chip from the iPhone 6, not the A8X from the iPad Air 2), an increase from 1GB to 2GB of RAM and a higher-resolution rear camera.

The iPad mini 2 and 3 had a 5Mp main camera, but the mini 4 has an improved 8Mp sensor which appears to be identical to the iPad Air 2’s. Similarly, the front camera is upgraded with a slightly better 1.2Mp sensor and a lens which lets in 80 percent more light.

The mini 4 shares the same design as its predecessors, but it’s thinner at just 6.1mm and lacks a mute/rotation lock switch.

The battery is accordingly smaller – 19.1Wh instead of 23.8Wh in the iPad mini 2 and 3. However, thanks to the more efficient processor, battery life is actually improved by around an hour of video playback in our tests.

There are other more subtle differences too:

Performance is one of the biggest upgrades, both for general use and gaming. You can read our full iPad mini 4 review to see how the new model compares to the mini 2 and 3 in our benchmarks. But the extra power means you get 10fps burst mode for photos, 120fps slo-mo video and also Split View (in the photo below) where you can run two apps at the same time.

It’s not quite the jump we were hoping for – the iPad Air 2 is still a lot faster in certain apps and games – but it’s significant.

Another big improvement that’s easy to miss if you read a list of specifications is the fully laminated screen and anti-glare coating. The iPad mini 4 still has the same 7.9in screen size and resolution (2048×1536) but it’s far superior in terms of glare, contrast and colour. In fact, it now has 100 percent sRGB coverage, compared to around 70 percent on the iPad mini 2/3.