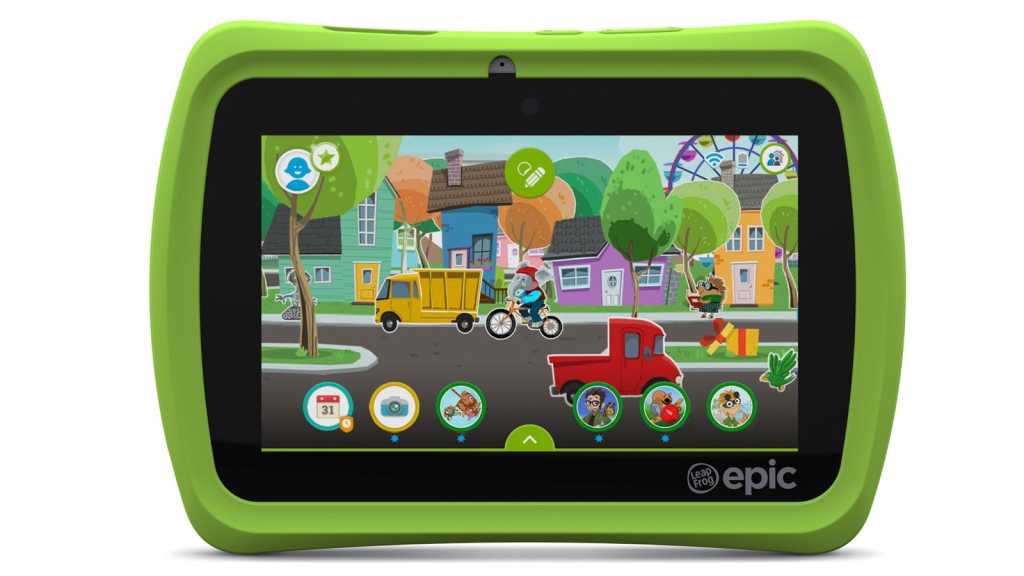 The updated software and interactive home screen are welcome, but the hardware is disappointing for the money. You don’t get many games included, and there’s limited educational value in what’s bundled. Amazon’s new £99 Kids Edition Fire tablet is arguably a better deal as it has better hardware, a better warranty (with accidental damage cover) and a year’s subscription to kids’ content thrown in.

LeapFrog’s latest tablet for kids is called the Epic, which stands for Explore, Play, Imagine, Create. Underneath the branding is a 7in Android tablet that comes with a silicone bumper and a stylus, and some clever software that changes as your child grows. Here’s our LeapFrog Epic review.

The Epic costs £119.99 and is available to buy immediately in stores and online from Amazon. It has 16GB of internal storage and has a microSD card for adding up to 32GB more.

We’ve seen just about every kids tablet – including the  LeapPad Platinum, and were immediately disappointed to see a low-quality screen on what is an expensive children’s tablet. Instead of IPS – the technology used in Amazon tablets, LeapFrog has cut corners and opted for TN. This means viewing angles are very limited and that you have to hold it at the right angle to see colours as they’re supposed to look.

The low resolution of 1024×600 isn’t as good as we’d expect at this price, but our three- and seven-year-old testers didn’t seem to mind.

Younger kids won’t mind the styling, but those a bit older will want to remove the bumper and maybe unhook the stylus cable to give a sleeker look. Even then, the huge bezels mean it never really looks sleek.

On the rear is a speaker, and this sounds quite good when the tablet is placed on a table top with the bumper attached.

There are front and rear cameras, but both are very poor for photos and videos. Like the screen, we would have been disappointed with these several years ago. In a modern tablet at this price, it’s unacceptable.

Battery life is decent enough at six hours or so, and you can recharge using a standard microUSB cable.

A 1.3GHz processor powers the Epic, but it never feels quick. It’s not as sluggish as some of LeapFrog’s previous tablets, but nowhere near as zippy as – for example – a Hudl 2.

Software is what LeapFrog has focused on. As well as a child-safe web browser in which you can add websites you deem appropriate, the whole system is locked down and safe for kids to use on their own.

The home screen is interactive, which our three-year-old loved. You can scroll side to side to move between different areas in the city – including the park – and add stickers which move around when you tap them. There are certain interactive elements, such as a weather forecast and a ‘word of the day’ game. It changes from day to night mode in real-time and the city changes depending on the child’s age. (You can, of course, set up multiple kids’ profiles.)

Daily surprises – a present they can tap on – offer fun mini-games such as story which involves recording your own voice when instructed to say and sing things which are inserted into the final story.

Six app icons reside at the bottom and you can drag any six apps from the app tray to replace the defaults.

You also get a calendar app, calculator, clock, notepad, voice recorder, music player, gallery (for your photos and videos. Plus there’s two main games: PetPadParty and Stretchy Monkey. The first time you open the Leapfrog app store you get a choice of a free app or game.

There’s plenty of fun to be had with the three games, but when they get bored, you’ll be paying for apps from the store. These range from a couple of pounds up to around £20 and include plenty of characters your kids will know including Octonauts, Frozen and more.

It’s worth pointing out that while the Epic displays the UK rather than US school system, none of the apps are UK specific. Voiceovers are American and while apps try to be ‘region-less’ it would be nice to have UK voiceovers, especially given that apps are some of the most expensive around.

There’s no way to access the underlying Android 4.4 OS and install apps from Google Play, but you can access the Amazon Appstore.