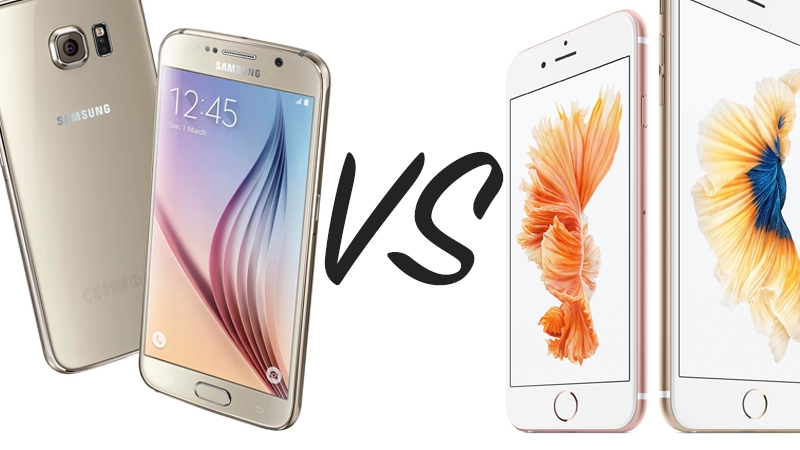 We can’t offer our full verdict on the iPhone 6s until we’ve spent more time with it in the PC Advisor office, but we expect it to impress us. We’re pleased to see camera improvements and the innovative new 3D Touch display, but we do wish that screen was higher-resolution to match the Samsung Galaxy S6, which absolutely blows the 6s out of the water in that area. These phones are the absolute top of the range in the smartphone market right now, and we don’t imagine you’ll be disappointed by either. Both are speedy and they both look great. You’ll find that you can buy the Galaxy S6 at a lower price, though, particularly now that it’s been available for a while, and you won’t see the iPhone 6s come down in price until September next year when the iPhone 7 arrives.

At the beginning of September, Apple unveiled its new iPhones, which come in the form of the 4.7in iPhone 6s and the 5.5in iPhone 6s Plus. Rival Samsung’s Galaxy S6 is one of the biggest competitors for the new iPhone, so if you’re trying to decide between the two, you’ve come to the right place. Here, we explore the similarities and differences between Apple and Samsung’s flagships in our iPhone 6s vs Samsung Galaxy S6 comparison, to help you get a better idea of which to buy.

The Galaxy S6 was first shown off by Samsung during MWC 2015 in March. It launched with a starting price of £599 for the 32GB model. Now, you can buy it from Samsung for £499, or £639 for the 64GB model and £719 for the 128GB model, and if you shop around you might find it’s available for less during sales and special offers from some retailers.

The iPhone 6s is newer, having been unveiled by Apple on 9 September and available to pre-order since 12 September. It’s set to become available to buy in stores on 25 September.

It comes with a price tag of £539 for the 16GB model, with the 64GB model increasing to £619 and the 128GB model for £699. That’s a bit less than the Galaxy S6 but it’ll stay that price until a new iPhone model arrives, whereas the S6 is often discounted or available cheaper during special offers.

You might be able to find a good deal on the iPhone 6s if you’re looking to get it on contract, though. Take a look at our iPhone 6s deals article for more.

When the Galaxy S6 was first unveiled it became apparent that there are several similarities to the design of the iPhone 6 (and now 6s), but that’s not necessarily a bad thing even if it is deemed to be copying by some. Both the S6 and the 6s have rounded corners and a metal chassis with similarly positioned ports, speakers, buttons and antenna strips. They also both have protruding cameras on the rear, although the Galaxy S6’s is in the centre while the iPhone 6s’s is on the left.

We’re not keen on the shiny mirror finish on the Gold Platinum and Blue Topez models of the Galaxy S6 as they pick up fingerprints and smudges really easily, but the White Pearl and Black Sapphire models are gorgeous. Also see: Best MiFi 2016.

Meanwhile, the matt aluminium finish of the iPhone 6s is available in a new Rose Gold, Gold, Silver and Space Grey, and is equally stunning.

Samsung has taken away the waterproofing protection with the Galaxy S6, which is disappointing for those who loved it on the Galaxy S5. The iPhone 6s is also not waterproof, so you won’t want to be dropping it in the bath or down the loo.

You’ll find that the iPhone 6s measures 7.1mm, just like the Galaxy S6, but the S6 manages to be a bit lighter at 138g compared with 143g, but you’d struggle to tell.

The iPhone 6s’s screen is 4.7in (while the iPhone 6s Plus screen is 5.5in, but we’re focusing on the 4.7in model here), with a resolution of 1334 x 750 pixels. It’s still a great screen, but there’s no doubt that the Galaxy S6’s screen is better and it’s immediately noticeable.

Samsung’s S6 also has a Super AMOLED screen that omits a backlight in favour of preserving battery light. It’s not dim at all, though, and is easy to see even in bright daylight. It produces deep contrast, too, with dark blacks and crisp whites, which we love.

Behind that incredible display is an equally incredible set of tech, including a super-speedy octa-core Exynos 7420 processor. It’s a 64-bit chip with two quad-core sets at 1.5GHz and 2.1GHz, Mali-T760 graphics and 3GB RAM. Also see: 100 funny things to ask S Voice

The iPhone 6s, on the other hand, has Apple’s own A9 64-bit processor with an M9 motion co-processor to handle the sensors and improves efficiency by taking some pressure off the A9. It has 2GB RAM, too.

In terms of storage, you’ve got the choice between 32GB, 64GB and 128GB, which is similar to Apple’s 16GB, 64GB and 128GB models. We wish Apple would ditch the 16GB iPhone in favour of a 32GB model, though. Neither smartphone has a microSD card slot so you’ll need to choose your storage size wisely at checkout. Both Apple and Samsung offer cloud storage options, though.

We’ll update this article with benchmark test results as soon as we’ve spent more time with the iPhone 6s, but for now you can expect both of these phones to be speedy and smooth. They’re both more than capable of running power-hungry and graphics-intensive apps, and the only lag we’ve experienced on the S6 is when trying to use the multi-tasking screen.

Powering the S6 is a 2550mAh battery, which is non-removable in a move that surprised some Samsung fans who’ve been used to being able to swap the battery out. It’ll come as no surprise that the iPhone 6s’s battery is non-removable too, but that’s always been the case with iPhones.

The S6 features wireless charging as standard, and also supports quick charging to give you enough power for four hours of use in 10 minutes. There’s also an Ultra power-saving mode.

There’s no wireless charging or quick charging for the iPhone 6s, but there is a new power-saving mode in iOS 9.

When it comes to connectivity, the Galaxy S6 offers 802.11ac WiFi, Bluetooth 4.0, NFC, an IR blaster and a Download Booster that can pair the power of 4G LTE with WiFi for downloads over 30MB.

The iPhone 6s also has 802.11ac WiFi, Bluetooth 4.2 and NFC (although it’s limited for use with Apple Pay-only), but there’s no IR Blaster or Download Booster.

The camera in the Galaxy S6 is incredible, and continues to blow us away every time we use it. It’s got a 16Mp camera on the rear with an LED flash. That camera supports smart optical image stabilisation, automatic real-time HDR and IR Detect White Balance. There’s also a huge number of manual controls available for the more keen smartphone photographers.

You’ll find that video is up to 4K for both of these smartphones, and both can capture slow-motion and time-lapse video.

On the front of the Galaxy S6 is a 5Mp camera for selfies, and you can use the heart-rate sensor on the rear of the phone as a capture button, which is handy.

Meanwhile, the iPhone 6s has a 12Mp rear-facing camera with 1.22 micron pixels which could potentially mean it can match the quality of the S6’s camera, but we’ll have to wait until we’ve carried out more tests to offer the final verdict there. The 6s misses out on optical stabilisation (which is only available with the iPhone 6s Plus) but does have a True Tone flash and autofocus with focus pixels.

On the front is a 5Mp camera like the one found in the Galaxy S6, and you can use the iPhone 6s’s display as a front-facing ‘Retina’ flash.

One of the big features of the iPhone 6s that we haven’t yet talked about is its 3D Touch display. The new technology built-into the display can measure pressure, meaning there are lots of new ways of interacting with the iPhone 6s that haven’t been seen before. It’s an exciting development that we are looking forward to spending more time with. We imagine it’ll require quite a steep learning curve but we’ll bring you our full verdict shortly. For now, though, you can find out more about 3D Touch and how it works here.

The Samsung Galaxy S6 offers a heart-rate scanner, which is something that the iPhone 6s lacks, but both have similar fingerprint sensors that are hidden beneath the home buttons. These sensors will work with Apple Pay and Samsung Pay respectively to help keep mobile payments secure.

Software is where things are extremely different, as the Samsung Galaxy S6 runs Android while the iPhone 6s runs Apple’s iOS. It can take some time to get used to the new software if you choose to switch, and keep in mind that lots of app data will be lost and you may have to pay for some apps again if you want to download them onto your new phone with a different operating system.

Samsung’s Android interface is called TouchWiz, and we’re pleased to say that it’s been stripped right back with little bloatware compared to previous models of Samsung phones. It’s running Android 5.0 Lollipop with a Marshmallow update on the cards. You can find out more about the Galaxy S6’s software here.

iOS 9 is the operating system you’ll find on Apple’s iPhone 6s. It’s just been released and includes new features such as an improved Siri that’s a lot like Google Now and some other tweaks and changes from iOS 8.