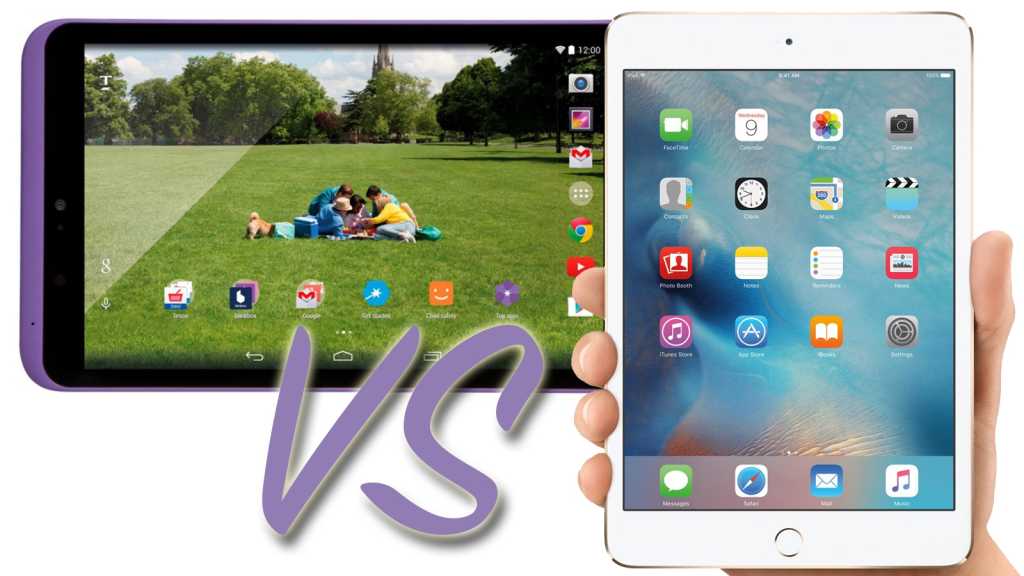 It’s pretty clear that the iPad mini 4 wins in almost every way here. It has better specs, better design, more up to date software and better connectivity features. But it also has a much, much bigger price tag and without a microSD card slot to add to that measly 16GB entry-level model you’re looking at £399. So buying the still excellent Hudl 2, which may have less impressive features but will be ideal for browsing the web, playing causal games, watching movies, using social media, replying to emails and more, and you’ll have £300 left over to spend on something else. So if you’ve read this entire comparison and are still considering the Hudl 2 then that should be all you need to know!

The Tesco Hudl 2 is one of the best budget tablets you can buy, currently available for a brilliant £99. That’s compared with the iPad mini 4’s £319 price tag, so you’re looking at an additional £220 if you opt for Apple’s tablet. You could buy three Tesco Hudl 2’s for the price of one iPad mini 4. See also: Best tablets of 2015

And we’re only talking about the starting price for the iPad mini, too. If you want the 64GB or 128GB you’re looking at £399 or £479 respectively, and add £100 to each price tag if you want to throw in 4G connectivity.

The Tesco Hudl 2 is only available in one model with 16GB of storage, and it’s WiFi only. It does offer a microSD card slot to allow you to add up to 32GB more space, though.

Both tablets are available to buy now, but which you choose is ultimately going to come down to budget. However, even if you’ve got the funds for the £319 iPad mini 4, it’s well worth considering whether you really need to spend it or whether the £99 Tesco Hudl 2 can in fact do everything you’re looking for in a tablet.

It’s pretty clear which of these tablets is the cheaper of the two just by looking at them, purely because the iPad mini 4 is made with sleek, stylish aluminium while the Hudl 2 is made with matt plastic. Both look great, but it’s obvious which is designed to look more premium. Plus, the Hudl 2 has thicker bezels around the display than the iPad mini 4.

We found the Hudl 2 to be easy to grip and comfortable to hold, though, and it comes in a wide variety of fun colours. The iPad mini 4’s colour options are Silver, Gold and Slate Grey.

Getting down to numbers now, you’ll find that the Hudl 2 is bigger overall (not least because it has an 8.3in display while the iPad mini 4’s display is 7.9in), and is thicker at 9mm and heavier at 410g.

The iPad mini 4 is an amazing 6.1mm thick and 299g, so is certainly more portable and you’ll hardly notice that it’s in your handbag or even your suit pocket, while the Hudl 2 might not quite fit in a handbag and you’re much more likely to be aware of its weight.

Here, we’d say choose the iPad mini 4 if looks are super-important to you and you plan on taking it out and about regularly. Otherwise, you could opt for the still lovely-looking Hudl 2 and save yourself £220…

As mentioned, the iPad mini 4’s display is smaller than the Hudl 2’s, at 7.9in diagonally compared with 8.3in.

That 7.9in display boasts a pixel density of 326ppi thanks to a resolution of 2048 x 1536, which is brilliant for watching movies and playing games. The Hudl 2 has a full HD display (1920 x 1200 pixels) amounting to 272ppi. It’s still a great screen though, so you’ll still find that it offers bright, crisp and colourful images, and that bigger display means a bit more screen estate for watching videos.

Inside the Hudl 2, you’ll find an Intel Atom quad-core processor clocked at 1.83GHz paired with 2GB RAM. It’s smooth enough to cope with web browsing, responding to emails and running casual games and apps, so if that’s what you’re intending to use your tablet for most then it’s going to be plenty fast enough for you.

The iPad mini 4, on the other hand, is equipped with a super-speedy, 64-bit A8 processor that’ll power even graphics-heavy games and hungry apps.

We’ve get to run benchmark tests on the new iPad mini 4 but when we do, we’ll update this article with the results to find out how they compare with the Hudl 2. However, we’re expecting the iPad mini 4 to blow the Hudl 2 out of the water when it comes to all three of our tests for processor speed, graphics performance and javascript.

However, that can be expected from a device that costs £220 more, and as we’ve mentioned, the Hudl 2 is by no means sluggish.

You’ll find that the Tesco Hudl 2 is only available with 16GB of built-in storage, but it offers a microSD card slot for the ability to add 32GB more for a total of 48GB.

The iPad mini 4 is available with 16GB, 64GB or 128GB, but none of those options offer a microSD card slot so we’d strongly recommend opting for the 64GB model over the 16GB model, as you’ll soon use that space up if you plan on downloading apps or storing movies on there.

When it comes to connectivity, the Hudl 2 has a miniHDMI port for connecting to your TV, Bluetooth 4.0, 802.11 WiFi and GPS.

The iPad mini 4 doesn’t have a miniHDMI, but it does offer faster Bluetooth and WiFi, at Bluetooth 4.2 and 802.11ac respectively. It also has 3G/4G connectivity (although that comes at a cost as demonstrated in the price section of this comparison), which isn’t an option with the Hudl 2 so you’ll only be able to access the internet when WiFi is available.

The iPad mini 4 also has the additional Touch ID fingerprint sensor beneath the home button for extra security. It can be used to unlock the iPad itself, or as an alternative to passwords for some apps.

You’re looking at a longer battery life with the iPad mini 4 too, at up to 10 hours (possibly more with the introduction of the more efficient and battery friendly iOS 9) compared with 8 hours for the Hudl 2.

Onto cameras now, of which both tablets offer two, one on the front and one on the back. The Hudl 2’s cameras are actually pretty great for the price tag. On the back is a 5Mp snapper and the front-facing camera is 1.2Mp.

The iPad mini 4 also has a 1.2Mp camera on the front, but the rear-facing camera is 8Mp.

The Hudl 2 is an Android tablet that runs Android 4.4 KitKat, which is a bit of a shame because that’s since been replaced by 5.0 Lollipop and now 6.0 Marshmallow. However, we do like that Tesco hasn’t messed about with the user interface too much, keeping it reasonably vanilla.

The iPad mini 4 runs the brand new iOS 9, which you can find out more about by following the links below.

How to downgrade from iOS 9 to iOS 8

How to get iOS 9 on your iPhone, iPad and iPod touch

We still think that software unlimitedly comes down to personal preference. You’ll probably already know whether you prefer Android or iOS, but the iPad mini 4 does get you the most up to date software available while the Hudl 2’s is quite old.