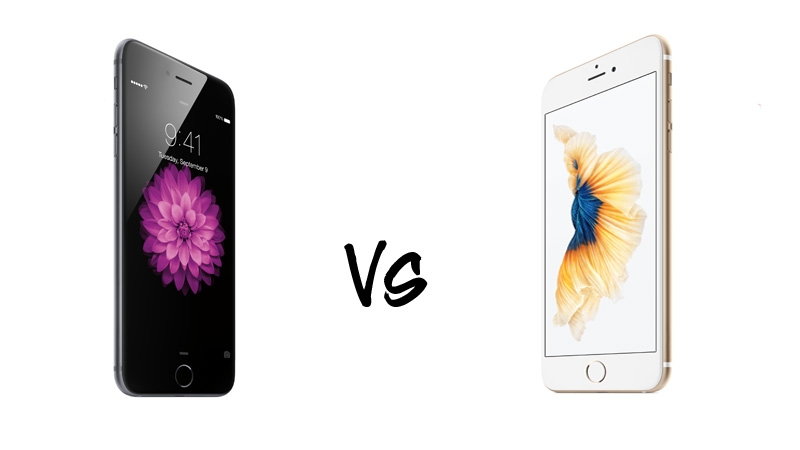 Apple recently announced its latest flagship phones, the iPhone 6s and iPhone 6s Plus alongside an updated Apple TV and a super-size iPad Pro. Boasting new 3D Touch technology and an improved camera, the iPhone 6s Plus looks absolutely amazing – but how does it compare to its predecessor, the original Apple phablet, the iPhone 6 Plus? Here, we compare the specs of the two devices to see which is the better option for you. See: Best iPhone 6S deals.

iPhone 6 Plus vs iPhone 6s Plus comparison: Design and build

It’s also marginally thicker, though it won’t be noticeable when the two phablets are side by side. In fact, the iPhone 6s Plus is only 0.2mm thicker than the iPhone 6 Plus, measuring in at 158.2×77.9×7.3mm. The extra 0.2mm thickness can be credited to the addition of 3D Touch, a technology that we’ll go into in more detail below.

iPhone 6 Plus vs iPhone 6s Plus comparison: Display

Let’s move onto the display, one of the key areas of the iPhone 6 Plus and iPhone 6s Plus. As mentioned above, the iPhone 6 Plus was the largest iPhone Apple had ever made, with a 5.5in full HD (1080×1920) display that looked absolutely gorgeous. It had a pixel density of 401ppi, and a brightness of 574nits (Samsung’s Galaxy S6 has a maximum of 563nits) making the iPhone 6 Plus display vibrant, crisp and one of the best all round displays on the market. Sure, it doesn’t have a 2K display like some of its Android phablet counterparts, but when balancing battery consumption with screen quality, Apple generally does well.

So, how does it compare to the display of the iPhone 6s Plus? In terms of resolution and size, nothing has changed – the iPhone 6 Plus also has a 5.5in display with a resolution of 1080×1920 and a pixel density of 401ppi, but with one very important difference – support for Apple’s latest screen tech, 3D Touch. 3D Touch is described by Apple as “the next generation of Multi-Touch” and introduces a completely new way to interact with your smartphone. As well as swiping, tapping and pinching your display, you’ll also be able to ‘Peek’ and ‘Pop’.

Admittedly, it’s a very hard feature to describe and even Apple had a bit of trouble explaining it at the iPhone launch event. Think of the Force Touch capabilities of the Apple Watch and new MacBook – it’s very similar to that, where you’re able to ‘peek’ at various pieces of information by applying slight pressure to your tap. Say, for example, you’ve been sent an address in a text message. Instead of tapping on the address to open Maps, you can ‘peek’ at the app by pressing and holding lightly to open a Quick View window, displaying the address in Apple Maps. If that’s all you wanted to see, let go to minimise the window and go back to the Messages app, or if you want to take a closer look, apply more pressure to ‘pop’ the Quick View window into a full screen app.

It doesn’t stop there either, the applications for 3D Touch are apparent throughout iOS and its apps. You can even access ‘Quick Access’ shortcuts from any (first or third-party) apps by tapping and applying pressure on an app icon. This opens up a variety of shortcuts that should speed up your iOS experience, such as being able to select the selfie cam when opening the camera app or being able to post a Facebook status without having to open the app. These are only examples of what can be done, and we’re sure app developers will come up with amazing new uses for the technology over the coming months.

With regards to the protection of these 1080p displays, both the iPhone 6 Plus and iPhone 6 Plus are protected by Ion strengthened glass that’s also used to protect the Apple Watch Sport. It’s Apple’s own alternative to Corning’s Gorilla Glass, and it generally performs quite well at protecting the device. Of course, if you drop your iPhone on its side from 6 foot in the air onto concrete, it’ll still shatter – the company can’t work miracles!

iPhone 6 Plus vs iPhone 6s Plus comparison: Spec and other features

So, apart from new display tech and a reinforced Series 7000 aluminium frame, what else is new with the iPhone 6s Plus? Well, the iPhone 6 Plus came with Apple’s A8 chip with an M8 motion coprocessor, coupled with 1GB of RAM. While 1GB of RAM doesn’t sound like much when compared to phones like the OnePlus Two with 4GB of RAM, we can’t recall a time where we’ve experienced considerable lag on an iPhone 6 Plus, which shows that RAM isn’t everything. In fact, having too much RAM and an over-the-top processor can affect battery life so we’re happy with the balance Apple offers.

However, with this being said, the iPhone 6s Plus offers Apple’s latest A9 chip with an M9 motion coprocessor and a whopping 2GB of RAM, double what’s available with the iPhone 6 Plus. The additional 1GB of RAM and A9 chip will help the iPhone 6s Plus handle the latest games and apps, which are becoming more and more processor hungry as users want more advanced functionality. The A9 chip should also bring battery improvements, as the transistor size is only 14nm, compared to the 20nm A8 chip in the iPhone 6 Plus. A smaller transistor size should cut power drain to some extent, but with a slightly smaller 2750mAh battery compared to last years 2915mAh offering, the overall battery life should be similar for both handsets.

Touch ID is one of the iPhone’s most popular features, and is used to unlock your iPhone and apps as well as with Apple Pay to authenticate purchases. While Touch ID has generally been praised by the Apple community, Apple thought it was time to improve it – introducing Touch ID v2, featured on the iPhone 6s Plus. The Touch ID sensor is still built into the home button, but has had improvements in both speed and reliability, which should translate to faster unlocks and fewer incorrect readings and errors.

In terms of connectivity, both devices are almost identical – both boast dual band Wi-Fi, NFC for Apple Pay and Bluetooth, although the iPhone 6 Plus offers V4 and the iPhone 6s Plus offers v4.2, offering various security and transfer speed improvements when using Bluetooth. There were rumours that the iPhone 6s Plus would come with an updated Lightning cable that’d be reversible on both ends, not just the Lightning end, however this sadly wasn’t the case.

See also: Complete guide to the iPhone 6s Plus

iPhone 6 Plus vs iPhone 6s Plus comparison: Camera

One feature that has been dramatically improved in the iPhone 6s Plus is the camera. Apple has notoriously used the same 8Mp sensor in all its iPhones since the introduction of the iPhone 4s back in 2011, and instead tweaks other elements of the camera to improve image quality. Take the iPhone 6 Plus – it may only have an 8Mp rear facing camera, but it features Optical Image Stabilisation (OIS), dual-tone ‘True Tone’ LED flash, a 1/3in sensor and larger 1.5µm pixels, and takes a very impressive photo. It can take 64-megapixel panorama photos, and boasts Auto HDR capabilities. It can also record standard 1080p video at 60fps, or slow motion 720p video at a whopping 240fps.

The front facing camera is a little less impressive, boasting a 1.2Mp camera with 720p HD video recording capabilities, but not much else. It’s a good camera for Snapchatting, FaceTiming and Skyping friends, but its resolution leaves much to be desired.

The company has said time and time again that it didn’t want to follow in the footsteps of its competitors and increase megapixel size without improving quality, as this can lead to blurry images with a high resolution. With this being said, the iPhone 6s Plus represents the next step in Apple’s camera evolution with a 12Mp rear facing camera. It boasts similar internals to its predecessor, but with a few key differences.

The first difference is that the iPhone 6s Plus can record video in 4K at 30fps, along with the standard 1080 & 720p offerings, although we’d advise against recording in 4K with a 16GB capacity iPhone as one minute of 4K video equates to around 375MB.

The second difference is the introduction of a new photo mode dubbed “Live Photos” by Apple at its announcement. The idea is that when you take a photo, a snapshot of what happens before and after is also captured along with audio. Then, using the 3D Touch technology built into the iPhone 6s Plus, photos be ‘played’ in the Photos app by tapping and holding down on the photo. It reminds us of the talking portraits in Harry Potter, and a popular feature for those who enjoy a trip down memory lane. Although with this being said, a Live Photo uses around double the storage of a standard 12Mp image captured by the 6s Plus, and we wouldn’t recommend using it very often on a 16GB iPhone 6s Plus.

The front facing camera of the iPhone 6s Plus has also had a much-awaited facelift, bumping the sensor up from a 1.2Mp sensor to a 5Mp sensor. That’s not all that’s new either, as the iPhone 6s Plus makes use of the Retina HD display to provide a True Tone flash for the front facing camera. Although this should improve selfies in dark environments, forward-facing flashes rarely produce a flattering photo, and we’re extremely interested to see whether the True Tone flash makes you look as pale as other forward-facing flash smartphones do.