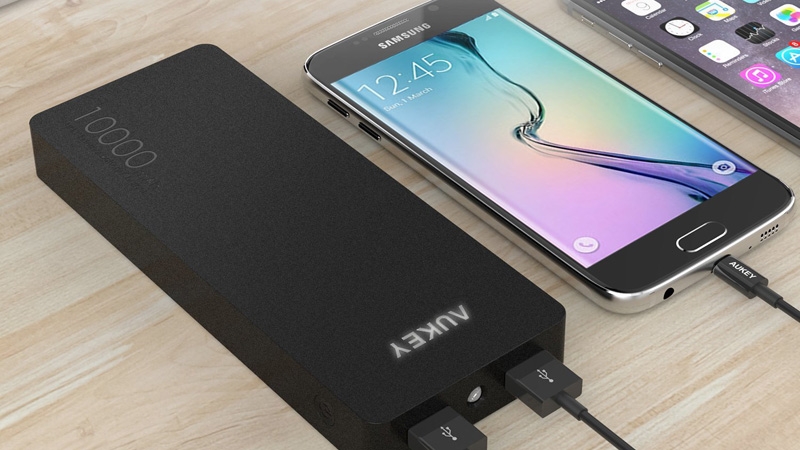 Thanks to Quick Charge 2.0 support this Aukey power bank is super-fast, yet it remains affordable, and it offers a useful amount of capacity for keeping your phone or tablet topped up away from the mains. We’d like to see a slightly slimmer design, but find the Aukey External Battery Charger reasonably stylish despite its plastic build.

Last month we reviewed Choetech’s Portable Power Bank. Brick-like in design and pricier than many rival power banks, the Choetech took our fancy for its inclusion of Qualcomm Quick Charge support, making it the fastest power bank we’d seen.

Then we received this Aukey 10,000mAh External Battery Charger. It’s still reasonably heavy at 247g, and you’re probably going to want to carry it in a bag rather than a pocket, but with a lower capacity the Aukey isn’t such a chunk of a device. It’s also half the price but with the same key lightning-quick specs. The Aukey External Battery Charger costs just £16.99 from Amazon.

In common with the Choetech, on one of its two USB outputs the Aukey supports Quick Charge 2.0, which can reduce charging time by up to 75 percent with compatible  phones such as the  Samsung Galaxy S6. On this connection there is also AlPower intelligent device-recognition for phones and tablets that don’t support the Quick Charge 2.0 standard, allowing the Aukey power bank to deliver the optimum amount of power for your device. Also see:  How to improve smartphone battery life.

Also like the Choetech there is a second USB output rated at just 5W, but unless you need to charge two devices at once we don’t see why you would use it. Where the Aukey falls down in comparison is that its 10W Micro-USB input, while fast, doesn’t also support Quick Charge.

There are several things we like about this power bank. Besides its Quick Charge support it also seems to happily support passthrough charging, which means you can charge both it and a connected  phone or  tablet at the same time. It can automatically begin charging your phone when you plug it in, and end charging once the battery is full. And we like its price, with the Aukey offering much better value when compared to its Quick Charge rival from Choetech. Also see: Best MiFi 2016.

The design is more aesthetically pleasing, too. We’ve seen slimmer 10,000mAh power banks, but the Aukey manages to look reasonably stylish. It’s a rectangular black matt plastic bank with rounded edges and a power button that lies flush on one edge. It feels tough enough not to need a carry case (which is lucky as one isn’t provided), and the Aukey logo on top that pulses as the device sends or receives power looks pretty cool, although it can be difficult to see in daylight. Also see:  Best desktop chargers 2015.

Something we’re not overly keen on is how this device tells you it’s running out of power. Whereas rival banks at this capacity use either an LCD screen or a series of four LEDs to tell you how much power is remaining, the Aukey uses a less intuitive system: a white LED means it has more than 60 percent capacity, green means it has anywhere between 20- and 60 percent remaining, while red means you better charge it before you next need to rely on it. And that’s our main gripe here: if you don’t have a good idea of how much power remains then the Aukey is all the more likely to let you down when you need it most.

So how much power can you get from this device exactly? The industry average efficiency rate, unless a manufacturer states otherwise, is between 65- and 70 percent. That means you could see 6,500- to 7,000mAh of power available to your phone or tablet. To work out how many times you can then fill your device you need to know its own battery capacity. So, for example, I could fill my Samsung Galaxy S6’s 2,550mAh battery a little over 2.5 times from the Aukey External Battery Charger.

Read next:  How to charge your phone or tablet faster