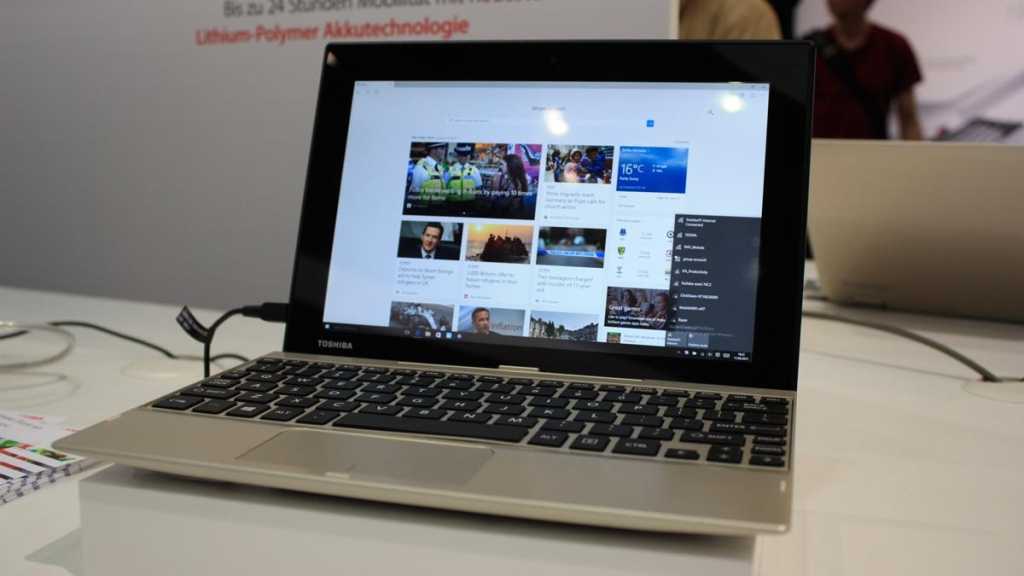 The Toshiba Satellite Click 10 hasn’t blown us away – its design and specs are quite average overall – but that’s not to say we don’t think it could be a brilliant device for certain types of users. In particular, it would suit students and business people who travel regularly. You’re not going to be able to carry out any heavy duty tasks or run power-hungry software, but for browsing the web, working on Microsoft Office documents and other general tasks it’s a brilliant way to get the benefits of a laptop and of a tablet rolled into one. We’ll reserve our final verdict once we’ve spent more time with the device to determine how speedy it is. Plus, it’s price tag could make a big difference, too.

Toshiba took to IFA 2015 to show off some of its new laptops, with the star of the show being the Toshiba Satellite Radius 12 convertible laptop with a 4K display. Alongside it, the company released the Satellite Click 10, which is a 10in tablet that clicks into the keyboard to transform into a small and portable laptop.

Toshiba hasn’t yet revealed the price of the Satellite Click 10, but it has talked vaguely about its release date. The company says it’ll be out before the end of the year in the UK, so hopefully just in time for Christmas. It’s just a shame it didn’t arrive in time for back-to-school, because this would be a great device for students. See also: Best laptops for students 2015

This isn’t the first Satellite Click Toshibas has released in its history, though. Earlier this year at CES it showed off a Satellite Click Mini with an 8.9in screen, for example.

The Satellite Click is a small and sweet device, with a 10.1in display and a reasonably thin and light design that makes this a truly portable laptop. And of course, when you want to use it as a tablet, you can simply press down on the button on the keyboard portion to detach it. We were impressed by how easily the screen can be removed and reattached – it clicks back into place without any fuss at all.

You get a full-size keyboard to work with and the screen is a great size for both productivity and entertainment, but you’ll want to adjust the settings on Windows 10 to zoom in on everything a little bit, because the icons, text and navigation bars are teeny tiny otherwise.

It’s a shame that the bezels around the screen are so large, but the overall the look of the Satellite Click 10 i certainly neat and practical with an element of style added by the brushed aluminium chassis that Toshiba describes as Satin Gold.

The 10.1in display on the Satellite Click boasts a FullHD resolution at 1920 x 1200 pixels. Inside is an Intel Atom processor and 4GB RAM, as well as 64GB storage that can be added to thanks to the microSD card slot that supports up to 128GB extra space. You’ll find a micro-USB port, micro-HDMI port and two USB 2.0 ports, too.

Toshiba claims that the Satellite Click 10 will last for 15 hours on one charge. We’ll have to wait until we’ve got the device back to our labs for testing to find out how accurate that is, but we hope that Toshiba’s claims are true as that would add to its portability. Plus, Toshiba has cleverly designed the Satellite Click to charge the tablet first and discharge the battery in the tablet last so that, even if the keyboard’s battery runs out, you’ll still be able to use it as a tablet.

There’s an 8Mp camera on the rear and 2MP on the front, but we don’t imagine you’d use the cameras much aside from video calls, perhaps. 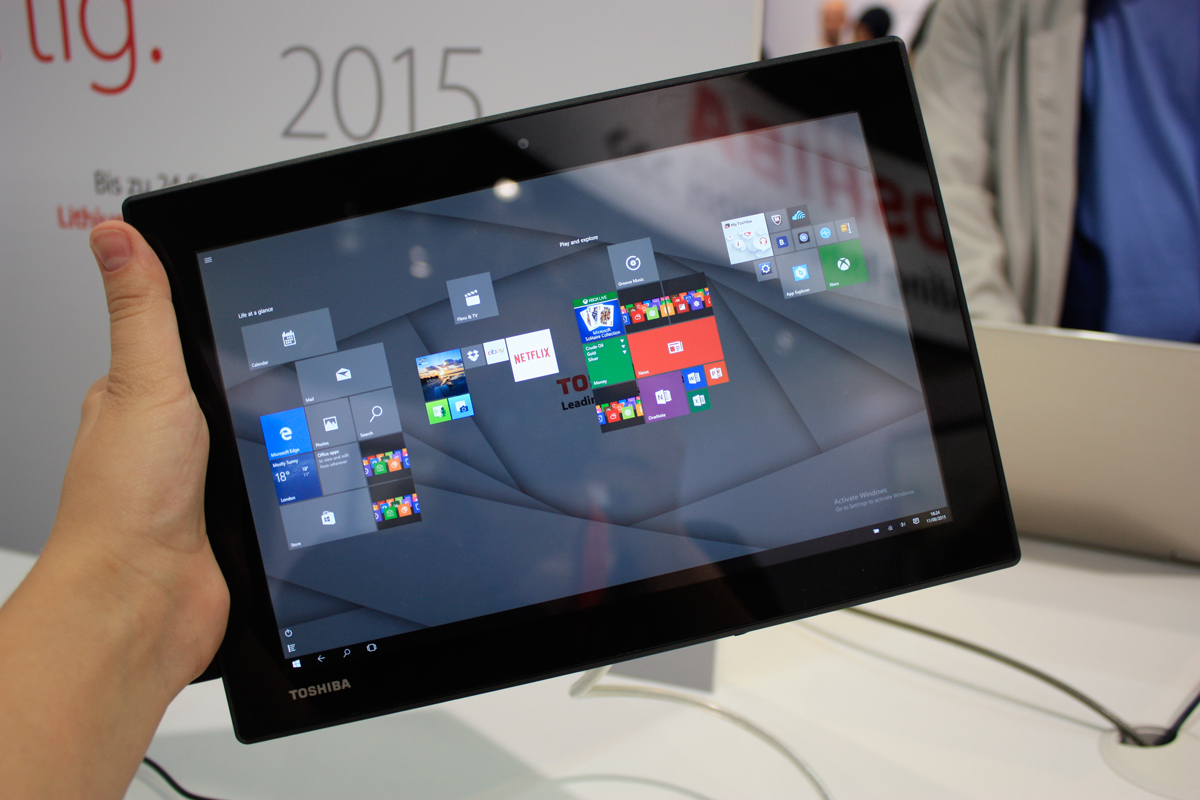 The Satellite Click 10 is running Windows 10, and comes complete with a quick access key to Cortana, the Microsoft voice-activated digital assistant much like Apple’s Siri and Google Now. Windows 10 has been designed with devices like this one in mind, meaning that the Continuum feature kicks in immediately when you’re switching between tablet and laptop mode, adjusting to suit the way you’re using it.

You’ll get the choice between Windows 10 and Windows 10 Pro when purchasing the Satellite Click 10. Find out more about the differences here.