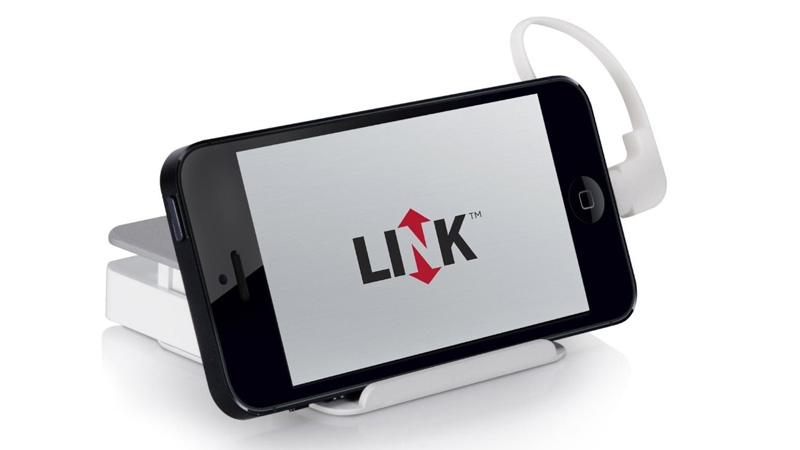 It might be on the pricey side for a plastic power bank, but we can’t ignore how incredibly useful is this Imation Link Power Drive. Not only does it provide a full charge for your iPhone, but it offers extra storage that is otherwise achievable only through the cloud or by buying a more expensive wireless hard drive or a new iPhone with more storage out of the box. At £49.99 we can think of several 16GB iPhone owners who are rapidly running out of storage space (and battery life) and would find it worth every single penny.

The Imation Link Power Drive is one of the most useful iPhone accessories we’ve come across, offering extra- and secure storage for your photos, video, music, documents and more, and boosting iPhone battery life by providing a full charge away from the mains. Also see: Best power banks.

When Apple introduced its iPhone 6 it removed the 32GB storage option. With no removable storage the 16GB iPhone 6 wouldn’t be sufficient for many users, so Apple offered a choice: pay for extra iCloud storage, or buy the 64GB (or 128GB) iPhone 6. Both options incur extra cost, with an £80 jump from the 16GB iPhone 6 to the 64GB iPhone 6.

The Imation Link bridges that gap, offering you the opportunity to get extra iPhone storage at a cheaper price. The Power Drive is available in 16-, 32- and 64GB capacities, with the 16GB model we reviewed costing £49.99 from Currys.

According to Imation, the 16GB of storage it offers is ample for 5,700-plus photos, or 4,100-plus songs, or more than 11 HD videos. You can also add documents and contacts to the Power Drive, and there’s a password-protected folder offering secure storage for your most sensitive files should the Imation Link get into the wrong hands.

Setup is incredibly easy, and all you need to do is plug in the Power Drive using the built-in Lightning cable and install the app when prompted. You can then see all your files in a file browser window, and can copy and move files from iPhone to Power Drive as required. The Power Drive has other file-manager functionality too, for example allowing you to play a slideshow of your images and preview video files.

A second built-in cable, full-size USB, allows you to connect the Imation Link Power Drive to a PC or Mac to transfer files, or to recharge the device’s internal battery. Provided that you have more than 10 percent battery capacity, you can flip the power switch and the device will also act as a power bank for your iPhone. Also see:  How to improve smartphone battery life.

Ordinarily we like to see auto-on in power banks, which prevents you having to fiddle around with buttons, but here its absence is a good thing, meaning you can use the Power Drive only as a hard drive unless you need the extra power it provides.

With 3000mAh on offer (expect to achieve somewhere in the region of 2000mAh), you should get a full charge for any iPhone, and that will keep you going all day long.

The companion Link app for the Imation Link Power Drive requires iOS 7 or higher, but it isn’t restricted to iPhone. You can use the Power Drive with any iOS device with a Lightning connection, which includes the fifth-generation iPod touch, and iPhones ranging from the 5 through 5c,  5s, 6 and 6 Plus.

We also tried the Power Drive with our second-generation iPad mini, and it worked flawlessly, although neither its relatively low capacity nor its 5W output are suited to iPad. When the iPhone 6s and 6s Plus are unveiled later this week they should also be compatible with the Imation Link Power Drive. Also see:  Best desktop chargers 2015.

At a penny under £50 the Imation Link Power Drive is very expensive for a 3000mAh iPhone power bank, and its plastic design doesn’t quite live up to the price tag, but the 16GB of extra storage it provides makes it well worth the outlay. Indeed, our colleagues at Macworld have rounded up several devices that add storage to iPhone, and compared with those devices the Power Drive is a steal.

The Power Drive is a small white plastic box with a silver plastic top. The bottom of the device slides open to create a lipped stand for your iPhone, although it wasn’t immediately obvious that this was the case and the rear plate wasn’t actually falling away. Around its rim run two built-in flat cables – Lightning and full-size USB – and where they meet in the middle you’ll find the power button that enables the Power Drive to act as a power bank.

We like the fact you don’t need to carry around extra cables (and Lightning cables are often in short supply given their expense), and that the cables tuck away neatly, but we’re not convinced they will continue to sit flush following use over time. Neither are we particularly keen on white cables which, despite following Apple’s own design ethics, don’t tend to stand up well to dust and grime. (It’s worth pointing out that no carry case is provided to protect the Power Drive from dirt or wear and tear.) Also see:  How to charge your phone or tablet faster

On top is a silver button that lies flush with the case, with four LEDs built in. This is used to check how much battery power remains, and to wake the Power Drive which will automatically enter sleep mode following five minutes of inactivity to preserve battery power.

When viewed solely as a power bank the Imation Link lacks several features provided by other banks, yet it does the job. For a start, it can be used only with iOS, whereas rival banks will support any device that can be connected with a USB cable. Passthrough charging isn’t recommended, whereby you charge both it and a connected device at once, and although it seems a minor point there’s no built-in LED torch. The 5W input and 5W output don’t sound impressive either, although they are adequate for filling up such a low-capacity power bank or an iPhone or iPod touch.

Read next: How to add storage to Android.