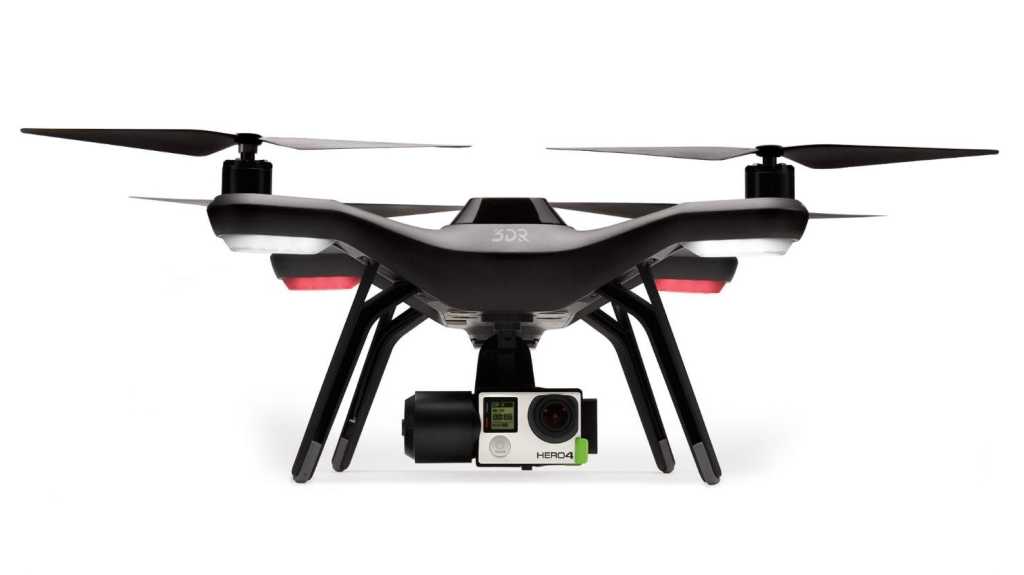 The Solo is a fantastic tool for capturing stunning aerial shots that would otherwise be impossible even for experienced quadcopter pilots. The price, though, will be a barrier for a lot of people. A Phantom 3 Advanced, for example, costs considerably less than the basic Solo yet comes with a great camera and gimbal. DJI has already announced it will add orbit and follow modes in an update coming soon, meaning it will deliver similar shots on a much smaller budget.

3DR isn’t a well-known name in quadcopter circles – in the UK at least. The company’s first consumer drone is the Solo and we’ve flown it. See also: Best quadcopters to buy in 2015

It costs £979, and is widely available to buy in the UK from online stores such as Firstpersonview.co.uk. It will also be available in certain shops on the High Street.

Compared to some quadcopters, the Solo has a more purposeful – almost military – look about it. It’s roughly the same size as a DJI Phantom 3 and also has self-tightening props which are quick to unscrew for easier transport.

And like the Phantom 3 Advanced and Professional, the Solo comes with a smart controller that will accept an iPad mini, giving you a large display for composing shots. The controller takes certain cues from gamepads and has large, easy to use buttons including an obvious ‘FLY’ button which launches the bird into the air when held down and a ‘return to home’ button that brings the Solo back to you – handy if you lose sight of it.

There’s a basic carry case in the box, but it’s not as protective as a hard case. You get a pair of spare props – one clockwise, one counter-clockwise. Propellers aren’t yet widely available as spares in the UK, but will be soon. They cost around £10 per pair, although third-party props should pop up soon and work out cheaper.

To be clear, you don’t need to buy a gimbal. The basic Solo comes with a fixed frame and an HDMI cable so you can see the view from your Hero. It’s just that the footage won’t be stable. Whatever you choose, you’ll always see a great live view with very little latency (120ms, in fact).

The gimbal may be expensive, but it’s well designed. It has a flexible, yet sturdy micro HDMI connector which plugs into the side of your GoPro. And the camera clips into the gimbal without the need for tools, so it’s easy to pop it out and change the battery.

3DR worked closely with GoPro to ensure full compatibility. This means that as well as being able to see a high quality video feed on your iOS or Android device, you also have full control over the GoPro’s settings remotely. So if you want to change the resolution, field of view or anything else while flying, you can.

The controller has a ‘paddle’ on the left shoulder (to the right in the image above) for adjusting the tilt angle of the camera, and two buttons on the opposite side which put the camera at two different preset angles.

There’s a small LCD display in the centre of the controller shows the precise angle along with other useful information. One small gripe is that the controller’s entire front panel has a reflective glossy finish which isn’t ideal as you’re already getting glare from your phone or tablet’s screen, and it makes the display harder to see. Here’s what you’ll see on the display:

The good news is that the controller is easy and intuitive to use and offers A and B buttons which are used primarily for ‘smart shots’ which we’ll come to in a minute. It also has a built-in rechargeable lithium battery and an HDMI output for streaming your flight to a larger display or even the web.

There are a couple of other noteworthy design features about the Solo. One is its expansion bay which will be used for various things in the future. It could, for example, house a parachute for safety when flying the Solo indoors, and 3DR is already working on an indoor flight system which uses optical flow sensors which it says are better than sonar (which the Phantom 3 Advanced and Professional have). 3DR argues that few people need to fly indoors or in areas with no GPS coverage, so it’s better to have a more expensive, higher-quality positioning system for those who really need it.

The Solo is also “built to evolve” and has swappable motor pods. In the future it might be possible to buy higher quality, more powerful motors which would be impossible to provide on a mass-produced quadcopter.

Last, but certainly not least, the Solo mitigates the possibility of flyaways by using a Pixhawk 2 flight controller in conjunction with a 1GHz Linux-based computer (and a second computer in the controller). It’s the only consumer quadcopter we know of to do this. Instead of the transmitter communicating directly with the flight controller, commands are sent via the Linux computer. If there’s a problem and the flight controller stops receiving information, it waits for the Linux computer to reboot and simply hovers in place. If it gets no further information, it’s programmed to return to the home location.

There are, of course, no cast iron guarantees that any quadcopter will always  return, but 3DR is so confident that it will replace your Solo if it malfunctions or goes missing (and even your GoPro) as long as it wasn’t your fault. Every last detail of the flight is logged and recorded by the controller so you can create a support request via the app and send all the information about the problematic flight to 3DR.

Flying the Solo is much like flying a Phantom. Out of the box, the controls are the same and you can fly it manually whenever you like. Since there’s GPS and a compass, it’s extremely easy to fly. When you let go of the controls the Solo hovers and you can set height and speed restrictions in the app which make it even easier to learn.

The killer feature, though, is Smart Shots. Tap the button at the bottom-left corner of the app and you get a choice of Cable Cam, Orbit, Selfie and Follow.

With cable cam, you fly to a start point and press the controller’s A button. Then you fly to a finish point and hit B to record that too. Then you press the play button and the Solo will fly in a straight line – as if it was on a cable – to the start point. It will smoothly move the camera between the direction it was facing at the start to the exact framing at the finish, including changing the tilt angle. This creates stunningly smooth footage that’s essentially impossible to capture when flying manually.

Orbit mode does what you’d expect. The neat part is that you can easily set the centre of the orbit by switching to a satellite map view in the app and dragging it until the focal point is under the marker. You can change the radius of the orbit using the forward and back control, while at the same time increasing or decreasing altitude. All the while, the camera will remain fixed on the centre of the orbit and you can use the paddle to adjust the tilt angle (by default the camera will centre at ground level). Again, the footage looks great.

Follow me is also self-explanatory. The Solo will remain focused on your position and move at the same speed as you move. Depending on its position relative to you, it could be following behind you, panning at the side, or even in ‘push mode’ when you’re travelling towards it. Another mode within Follow me is Watch Me. This means the Solo will hover where it is, but turn to face you at all times. You could use this, for example, at a racetrack or any location where you want the drone to stay in one place but keep track of you as you move around.

Last is Selfie. When you’ve fine-tuned the starting position in the air, you can use the sliders to adjust the speed and final height: press Play and Selfie mode sees the Solo shoot backwards and upwards – a camera move called a reveal in cinema terms. Once it has reached the furthest point, the Solo keeps recording and returns to the start position on the same trajectory. This move is relatively easy to do manually, but it’s still nice to have an automatic option especially as Selfie mode tilts the camera during the move to ensure you’re always the centre of the frame.

For all Smart Shots, you can use the satellite map view to check for obstacles (it has no built-in obstacle avoidance), or to make it easier to position the Solo.  If you don’t have a cellular connection on your phone or tablet, you can use the app to cache satellite imagery of the area you’ll be flying in before heading out.