Based on our time with the Samsung Gear S2, we think it’s a sleek smartwatch with an attractive design. It offers fairly standard smartwatch features like fitness tracking, but also includes some rather interesting features including a rotating bezel used for navigating the UI and enhanced app capabilities. At £249, it sits itself alongside the likes of the Moto 360 2, and we think the Gear S2 is a great, if not better option for Android users – especially with a custom, intuitive UI.

During IFA 2015 in Berlin, Samsung unveiled its latest smartwatch, the Samsung Gear S2. The circular smartwatch is the first of its kind from Samsung, and is following in the steps of other circular smartwatches like the Moto 360 and, more recently, the Huawei Watch. During its announcement, Samsung promised exciting things regarding the Gear S2, but did the company deliver? We’ve spent some time with Samsung’s offering to find out. Updated with our video review. See also: Best smartwatches and wearables to buy in the UK in 2015

The Samsung Gear S2 comes in two editions, the standard Gear S2, and one for those of us that love the classic wrist watch look, the Gear S2 Classic. Samsung says the smartwatch is designed for those who prefer a more timeless design, and we think they’ve hit the mark. We got our hands on the standard Gear S2, which comes in both silver and a slightly darker grey.

On the wrist, the Gear S2 feels pretty lightweight and comfortable to wear. Though it measures in at 42.3×49.8×11.4mm compared to the 11.5mm width of the first generation Moto 360 which people say is quite bulky, the Gear S2 doesn’t feel like a bulky watch. In fact, its weight and general build make it feel solid and premium, an issue that (in our opinion) Samsung has had with its past smartwatches.

The real beauty of the design of the Gear S2 comes not with the circular display itself, but with the bezel of the watch. Instead of directly interacting with the screen of the Gear S2, users have the option of using the rotating watch bezel to scroll through the various menus and apps of the smartwatch.

When you turn the bezel, you’ll feel a gentle click which Samsung says will allow for muscle memory to eventually kick in and enable you to select apps without needing to look at the screen, although after using the watch for two weeks we still couldn’t manage it. It’s not a click generated by a vibration motor either, it’s mechanical. This means that there’s no battery life drain for those of you (and believe us, there will be a few) that just love the sensation of turning the bezel. It is pretty satisfying, we can’t lie. 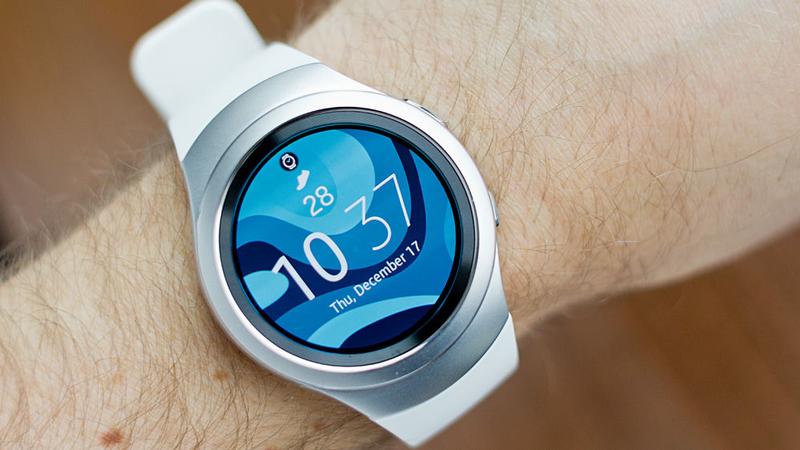 Of course, users have the freedom of freely tapping and swiping directly on the watch face, but this isn’t how Samsung intends the device to be used. Although with this being said, we found using the bezel a little confusing when navigating the new circular UX, especially at first – but we’ll come to that below. Although with this being said, early adopters of the Apple Watch had the same issue and we don’t hear many complaints about it months down the line, do we?

Samsung included Android-style back and home buttons on the side of the smartwatch to make using it an easier process, though we found it to be a bit of a fiddly process and we kept confusing the buttons as there is no real indication of which is which just by looking at it.

Let’s talk spec; the Samsung Gear S2 boasts a 1.2in AMOLED screen with a resolution of 360×360, which would sound nicer if Huawei hadn’t announced the Huawei Classic Watch, which features a 400×400 resolution, and is only £30 more expensive than Samsung’s offering. Although with this being said the Gear S2 has a fairly decent pixel density of 301ppi, so it’s far from a low-res display. It’s protected by Gorilla Glass 3 too, which is fairly standard for current smartwatches and should help protect your wearable from scratches and general damage.

The Samsung Gear S2 features a 1GHz Exynos 3250 processor coupled with 512MB of RAM along with 4GB of on-board storage, which provides a fairly responsive experience, and we didn’t encounter any lag during our time with the watch. It also has an IP68 rating, which means its dust and water resistant to a certain extent and will definitely survive being caught in the rain.

The Gear S2 also features not only Bluetooth, but NFC and Wi-Fi capabilities. Wi-Fi connectivity is especially impressive as it allows users to use the smartwatch when not connected to your phone when at home, work, or anywhere else with Wi-Fi. 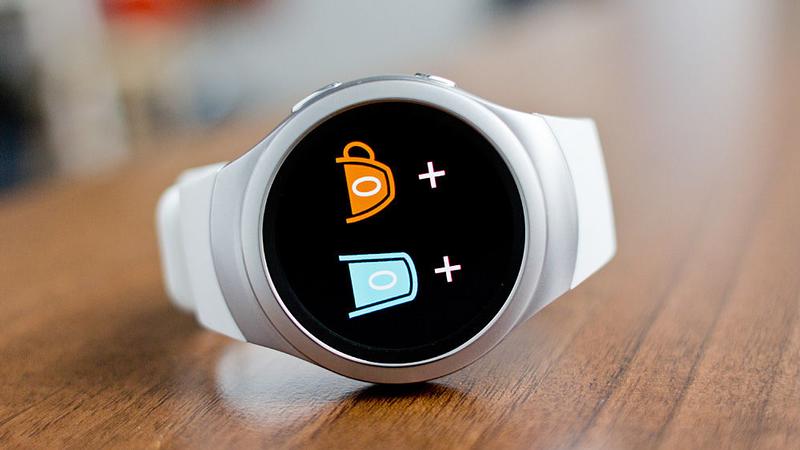 It’s a good way to motivate yourself to get fit, but we found that it wasn’t very accurate at times. There were a handful of occasions where we’d be sat at our desks working, and the watch would count it as ‘light activity’. Although with this being said, we love the circular layout and when you haven’t been active for a while, you’ll get a little nudge to encourage you to get moving. You can also monitor your exercises with only a few taps, and we found it to be more accurate than its general tracking abilities.

In terms of battery life, the Gear S2 boasts a 250mAh battery that Samsung claims should last around 2-3 days on a single charge, with the use of Samsung’s built in battery saving mode. Without the battery saving mode on, you can expect a similar battery life to the Apple Watch, which gets you through the day and night without issue, but will usually run out of power at some point during the second day.

Samsung is using its own custom circular UX with the Gear S2, which works well with the hardware and overall design. The watch is easy to use, although it does require a bit of a learning curve to learn what all the buttons do, and which way to turn the bezel. Turning the bezel clockwise will scroll through your widgets, which can easily be customised to suit your needs – we have ours set up so we can easily initiate a run, track our daily activity and log our caffeine and water intake. Turning the bezel anticlockwise will display your notifications, and pressing one of the buttons on the side will display all installed apps on the watch. Simple, but as we say, it took a while to get used to. 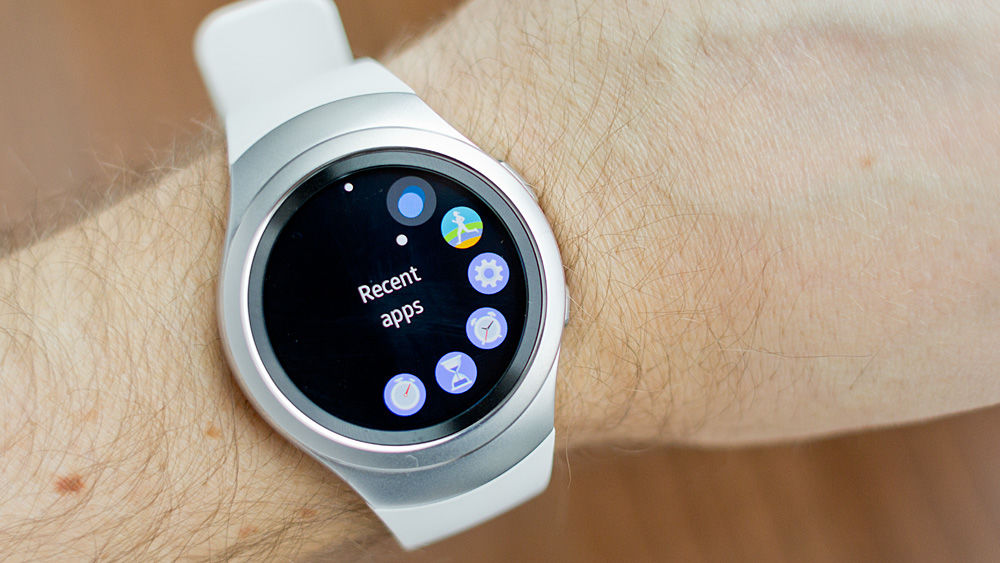 The initial setup process is fairly straight forward, though you don’t just need to install the Samsung Gear app on your Android device – once installed, you’re prompted to install two more apps from Google Play in order for the phone to be able to communicate with the watch. But once you’ve gone through the setup process, the Gear app is the central command for everything to do with the Gear S2.

The Gear app is where you can customise the layout of apps on your watch, customise the watch face itself, along with a number of other settings. It’s also where you can browse for apps to install on the watch, although we noticed almost every app we installed required a full phone app to be installed to operate properly. While this isn’t any different from the likes of the Apple Watch and its companion apps, it’s frustrating having to download the app twice instead of having it all bundled together like Apple’s offering.

Samsung is working hard with companies in various sectors (retail, social media, etc) to make sure that the apps running on the Gear S2 can perform as best as possible. We imagine this is because more often than not, watch companion apps are pretty disappointing in terms of what they can do without requiring you to use your phone. Take the CNN app as a prime example – with other smartwatches, you’re able to see headlines of CNN stories but not much else. However, with the Samsung Gear S2 you can tap on an interesting article and read it in its entirety, directly from the smartwatch.

iOS users can also get in on the Samsung Gear S2 action, though many of the features mentioned here won’t be available to them. Connecting an iPhone to the Gear S2 will provide users with notifications and limited fitness monitoring, but not much else. Though it’s supported, we wouldn’t advise iOS users to buy this smartwatch, especially as the Apple Watch is only £50 more and offers much more functionality for iOS users.

Overall, Samsung’s circular UI is a winner for us, as it’s simple to use and offers functionality not available on other smartwatches, though we do wish Samsung would somehow simplify the app installation process. 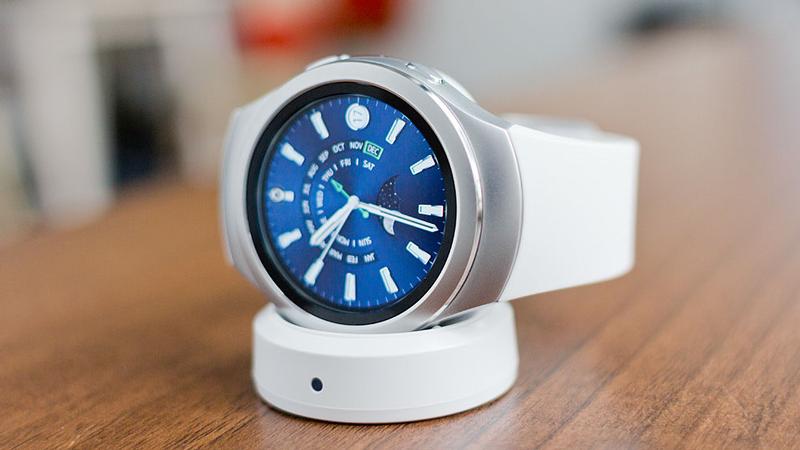 So, how much does the Gear S2 cost, and where can we get our hands on them? Samsung released the smartwatch back in October 2015, and is available to purchase directly from the Samsung website for £249. Those looking for something a little fancier can opt for the Gear S2 classic, which looks more like a classic wristwatch with a grooved bezel and leather strap, costing £50 more than the standard edition at £299.