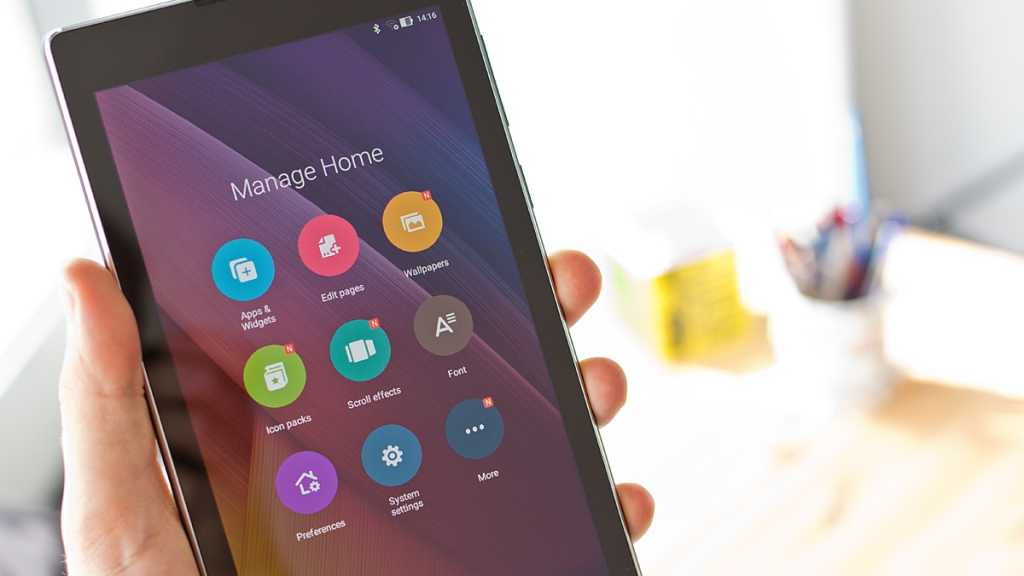 The Asus ZenPad C 7.0 is a fine tool for carrying in your bag wherever you go and using to check emails and social media and browse the web. Beyond that its functionality is limited, but what more can you expect from an £80 Android tablet?

At £79.99 the Asus ZenPad C 7.0 is one of the cheapest named-brand tablets you can buy. £20 cheaper than the Hudl 2, the ZenPad matches the Amazon Fire HD 6‘s price, but with a larger screen and full Google Play support. Does that make it a good buy? We find out in our Asus ZenPad C 7.0 review. Also see: Best budget tablets 2015.

The Asus ZenPad C 7.0 has several highlights. It has an attractive, highly portable design, available in black, white, red or ‘Aurora Metallic’, with a stylish chrome-effect trim and grippy textured rear. At this price the ZenPad has a generous amount of storage, which can be expanded via the microSD slot hidden behind a flap on the tablet’s back. And the Asus has a 7in IPS display that, despite its sub-HD resolution and limited brightness, packs in several technologies that help to improve the experience. Also see: Best new tablets coming in 2016.

For many users, the Asus will prove a capable tool for simple tasks such as browsing the web and checking emails and social media. So, it almost seems unreasonable for us to point out the faults in a working tablet at this price. After all, you would hardly expect the world from such a cheap device.

But it is a cheap device, and that becomes apparent when you look at what else you could get for your money. With full Google Play support and a larger screen you could argue that it’s a better buy than the slightly faster Amazon Fire HD 6, but compared to the Hudl 2 it’s a poor rival in almost every respect, save for its portability and, arguably, design. Tesco’s tablet costs an extra £20 on the shelf, but customers with Clubcard points to spend can pick up a Hudl 2 for just £50, and you really won’t find a better deal than that.

The Intel Atom processor and 1GB of RAM inside this Asus are not a pair built for speed, and navigating menus, swiping between home screens and launching apps is far from a quick affair. A single round of Temple Run 2 was all it took for the tablet to be getting on for uncomfortably warm, and a 9fps score in GFXBench T-Rex suggests the ZenPad isn’t designed for playing games. The Asus isn’t painfully slow, but its lack of pace is noticeable.

Few people will use a tablet as their weapon of choice for photography, which helps us to forgive the 2Mp camera at the Asus’ rear, but video chat is a popular use for tablets, and the 0.3Mp webcam leaves much to be desired even with its Beautification settings engaged. See all tablet reviews.

Connectivity-wise, you’ll find only the basics, with no cellular option, NFC, nor the latest 802.11ac Wi-Fi. That hardly comes as a shock. Neither, unfortunately, does the huge amount of bloat that is preinstalled on this cheap tablet.

As well as Asus’ own Zen UI that overlays Android 5.0 Lollipop, you’ll find Google’s usual suite of apps, Asus’ own apps for listening to music, getting online, managing email and more, plus more than 20 apps ranging from Zinio and TripAdvisor to Omlet Chat. Many of these can merely be disabled rather than uninstalled, which means of the device’s 16GB of storage you’ll see just under 9GB.

All our misgivings aside, if you can’t stretch to a Hudl 2 or simply prefer the Asus’ more portable design for accessing emails and browsing the web on the go, the ZenPad will serve you better than many of the no-name, no-frills rival tablets you’ll find on eBay or Amazon. Let’s take a closer look.

The ZenPad C 7.0 is, although plastic, actually pretty good-looking for such a cheap tablet. The glass runs almost edge to edge with a silver chrome-effect trim, creating a stylish look. This trim is slightly raised from the screen which, paired with the slightly larger rear, makes it easier to grip your fingers around than would an entirely rounded edge. Also see: Best tablets 2015.

Just 108mm wide and 265g, this tablet is comfortable to hold in a single hand in portrait mode. It does also work in landscape mode, although in this orientation you’ll find the device’s speaker and webcam fall under your left palm.

This easy-to-handle feeling extends to the Asus’ back, where you find a raised textured panel with another metallic Asus logo, and a slightly thinner smooth edge on one side. On the opposite edge is a cheap-feeling plastic flap that conceals a microSD slot, and the device’s 2Mp primary camera.

There are no hardware buttons on the front of the device, with just the speaker and webcam in the top bezel, and Asus logo below. Android back-, home- and recent software buttons sit above this bezel, while you’ll find a volume rocker and power switch on the right edge, headphone jack at the top and Micro-USB charging port at the bottom.

Turn on the Asus’ screen and it begins to lose its charm somewhat. Even at maximum brightness the screen looks dull, and despite what you may have read in Asus’ marketing materials it is a standard-definition screen – with a sub-HD resolution of 1024×600 pixels the Asus ZenPad has a low 170ppi pixel density. This is an IPS panel, though, which means colours are generally realistic and viewing angles are strong. And at 7in on the diagonal it offers a useful compromise between portability and usability.

Asus has built in several screen technologies, including Tru2Life and TruVivid, which together form Asus VisualMaster. This aims to combine hardware and software to deliver a better and more realistic visual experience. We say aims – this isn’t a terrible screen, but we were certainly expecting something better based on Asus’ marketing of it. Even using Asus Splendid to adjust the display to our taste we struggled to improve it much. Also see: Best Android tablets 2015.

As we mentioned in our introduction, the Asus ZenPad is a fine tool for day-to-day web browsing and checking email and social media, but its quad-core Intel Atom chip, 1GB of RAM and Mali-450 MP4 graphics are not high-performance components. We found considerable lag when navigating menus and launching apps – particularly the camera – and when playing games the ZenPad became rather warm fairly quickly. And compared to most smartphones, this tablet is slow – see what’s the fastest smartphone 2015?

We ran our usual benchmarks on the ZenPad and, unsurprisingly, didn’t see great results. In Geekbench 3.0’s processing speed test we recorded 401 points single-core, and 1064 multi-core. By comparison the Hudl 2 managed 2165 points multi-core.

The Hudl 2 also outran the ZenPad in the GFXBench T-Rex graphics test, in which it recorded 17fps against the Asus’ 9fps; and in SunSpider, where its web score of 768ms was considerably better than the sluggish 2102ms of the ZenPad (lower is better in this test).

In AnTuTu we recorded 23480 points from the ZenPad.

With reasonably low-spec hardware and a low-resolution screen, there’s little here to drain the battery. The Asus is fitted with a 3450mAh cell, which should be good for eight- to nine hours use, obviously depending on what you do with it. There are Ultra-saving, optimised and customised power-saving modes, plus an app manager that lets you control which third-party apps launch at startup, but the ZenPad doesn’t feature wirelss- or quick charging, and comes with just a 7W charger in the box.

Alongside the aforementioned 16GB of built-in storage and microSD support you get 5GB lifetime cloud storage via Asus WebStorage. Also see: Tablet Advisor.

In terms of connectivity you get exactly as you’d expect from a cheap tablet: the basics. So, you do get GPS, GLONASS and A-GPS, alongside 802.11b/g/n Wi-Fi and Bluetooth 4.0 (neither of which are the latest standards). You don’t get NFC, an IR blaster or cellular connectivity.

Tablets aren’t the most practical devices for taking photos, but they are a useful tool for video chat through Skype and the like. The camera software itself is okay, but it’s the hardware that lets it down.

The 0.3Mp webcam on this device is about as low in quality as they come, although Asus has made an attempt to improve things with several Beautification controls. During composition you can adjust things such as skin softening, apply blush, thin your cheeks and widen your eyes, and after you’ve shot a selfie you get access to further editing controls.

In our tests the only edits that had an obvious effect were the eye widening and cheek thinning, which just made us look as though we were calling from outer space. And, to be fair, when the picture is this fuzzy and the camera is struggling to deal with the lighting, you really don’t need to worry too much about hiding spots and smoothing wrinkles.

Turning our attention to the rear camera, there is really nothing to get excited about. It’s another low-quality snapper, here 2Mp, and although there are several impressive-sounding modes including HDR, Beautfication, Selfie, GIF Animation, Panorama, Smart Remove, All Smiles and more, the photos themselves are dull, fuzzy and lacking detail. (See below for our shots with and without HDR.)

Software is one thing the Asus ZenPad doesn’t lack, but that’s not necessarily a good thing, given that the huge number of preinstalled apps on this tablet leave you with just 9GB of the original 16GB storage free. A couple of these apps can be uninstalled, but most can merely be hidden from view if they get on your nerves clogging up the app tray.

Some of these apps may be useful, of course. Kids Mode creates a safe haven in which your children can play; Auto-start Manager stops the great many apps on the tablet all starting at once and then running in the background when you turn on the tablet, which Asus says will help to improve battery life; while Audio Wizard lets you set presets for movies, music, games and vocals. We’re not convinced that we need so many note-taking apps – there’s SuperNote for drawing quick notes, Quick Memo for typing quick notes, plus Do It Later for remembering those quick notes later – and with Asus’ own and Google’s suite of apps installed you’ll find two apps for most tasks.

The ZenPad runs Android 5.0 Lollipop, but with Asus’ Zen user interface over the top. This is most obvious in the layout of the Settings menu and in the drop-down editable quick settings menu. It’s not at all offensive once you get used to it.

Asus also includes some motion- and touch gestures. You can shake the tablet twice to take a screenshot or, when you’re in Do It Later, create a new task. There’s double-tap to wake the screen, and you can draw letters on the screen (when switched off) to launch an app of your choice.