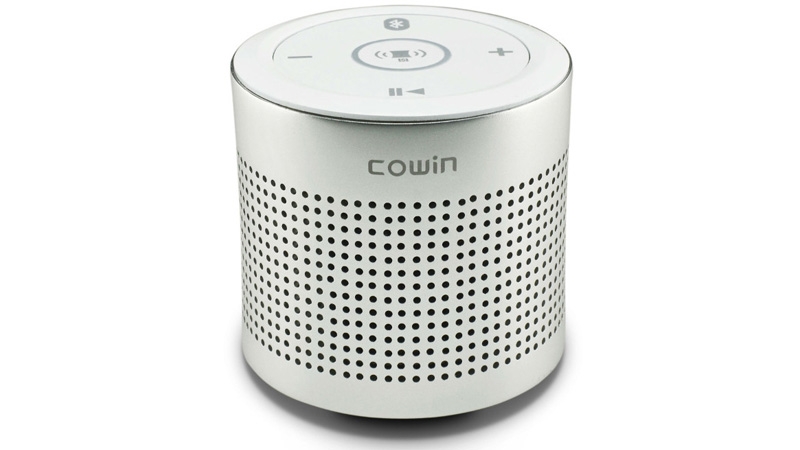 So, what do we think of the Cowin Thunder overall? It’s a fairly powerful portable Bluetooth speaker, and the addition of its “lightning mode” offers something slightly different and makes it stand out from the crowd. With that being said, audio quality is satisfactory and provides fairly balanced audio in all directions, thanks to its 360-degree audio projection.

The Cowin Thunder is a relatively new sub-£100 portable Bluetooth speaker, released back in May. So, what separates this speaker from the sea of portable Bluetooth speakers available? For one, it includes built-in vibration technology that aims to turn whatever surface its on into a speaker for a truly different experience. Does it live up to expectations, or should you go for something more conventional? Read on and find out.

The Cowin Thunder is definitely one of the better looking Bluetooth speakers we’ve reviewed recently – it has a chrome-esque design, and adopts a cylindrical design to aid its 360-degree audio projection, but we’ll come to that in more detail a little later on. It fits comfortably in one hand, and the play/pause, volume, Bluetooth and Lightning buttons are easily accessible from the top of the speaker.

The Thunder sits on a 5mm leg with a tacky surface, which allows users to attach the speaker to almost any smooth surface. In our testing, we found that it’d stick particularly well to glass surfaces, such as windows and plastic surfaces, but it’d quickly fall off when attached to wood – especially if a bassy song was being played at the time. As well as being able to attach the Thunder to any surface, the main purpose of the tacky leg is to utilise whatever surface the speaker on to, basically, turn it into a speaker – Cowin calls this ‘Lightning mode’.

Cowin is proud of just how portable the Thunder is, and at 79.2 x 79.2 x 89mm, it’s certainly a speaker that doesn’t take up a lot of room in a rucksack or bag. It’s also pretty lightweight, weighing in at only 495g, which when compared to 1.4KG Edifier Bric Connect that also boasts portable use, is ideal.

So, what makes the Cowin Thunder different from almost every other sub-£100 portable Bluetooth speaker on the market? It’s main attraction, and where the Thunder shines most, is something called “Lightning mode”, which we briefly mentioned above. When Thunder is attached to a table/window/box, you can activate its Lightning mode, which utilises the built-in vibration technology to turn the surface into a giant speaker. 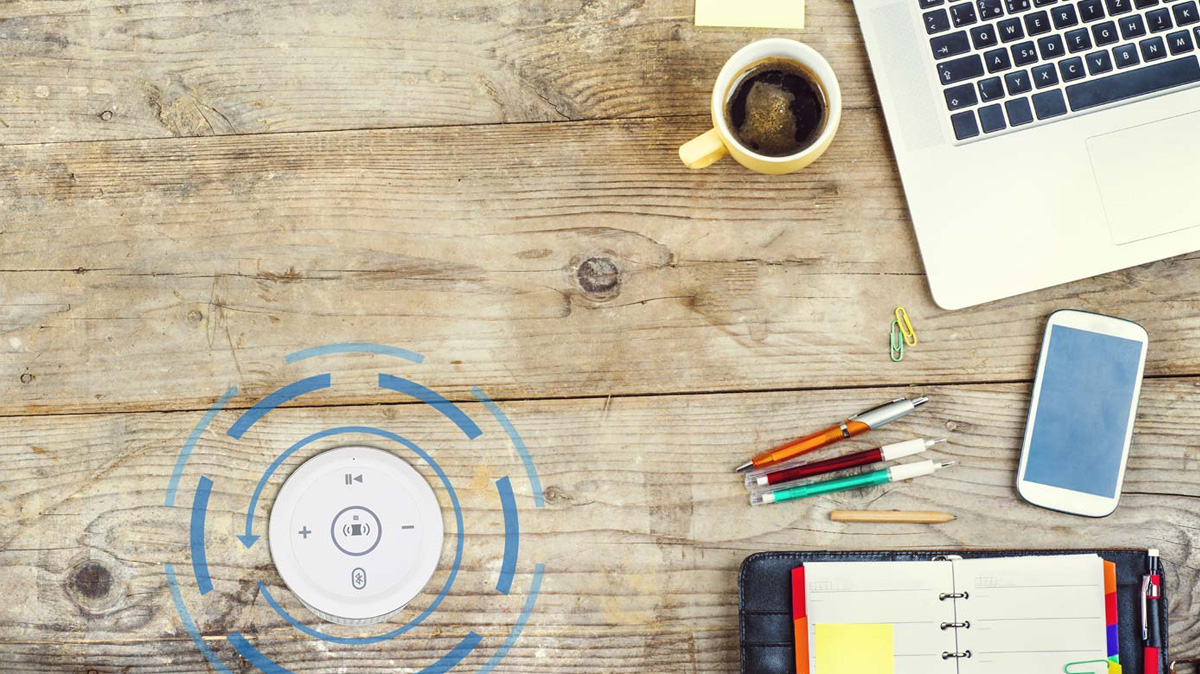 We found that Lightning mode really had an effect when placed on boxes, though you have to experiment with objects around your home to find which produces the best sound. For the best Lightning mode experience, we were told to place the Thunder at the bottom of a wheelie bin, as the bin would amplify the sound more than almost any other surface.

Connectivity wise, the Thunder boasts Bluetooth with NFC support for one-tap pairing. The Thunder also boasts speakerphone capabilities via Bluetooth, so if you’re playing music and get a call, there’s no need to disconnect the device. For those of you that want a physical connection, you’ll be pleased to know that the Thunder also has a 3.5mm jack input situated towards the bottom of the device, though you won’t be able to use the speakerphone capabilities.

Okay, we’ve teased you with its features, but how does the Cowin Thunder actually sound? Our first impression was that it was louder than it looks, which we can only assume is because of the 360-degree audio projection. Technically speaking, the Cowin Thunder is a 15W Bluetooth speaker, which should be loud enough for casual social occasions, but isn’t ideal for hosting a house party. 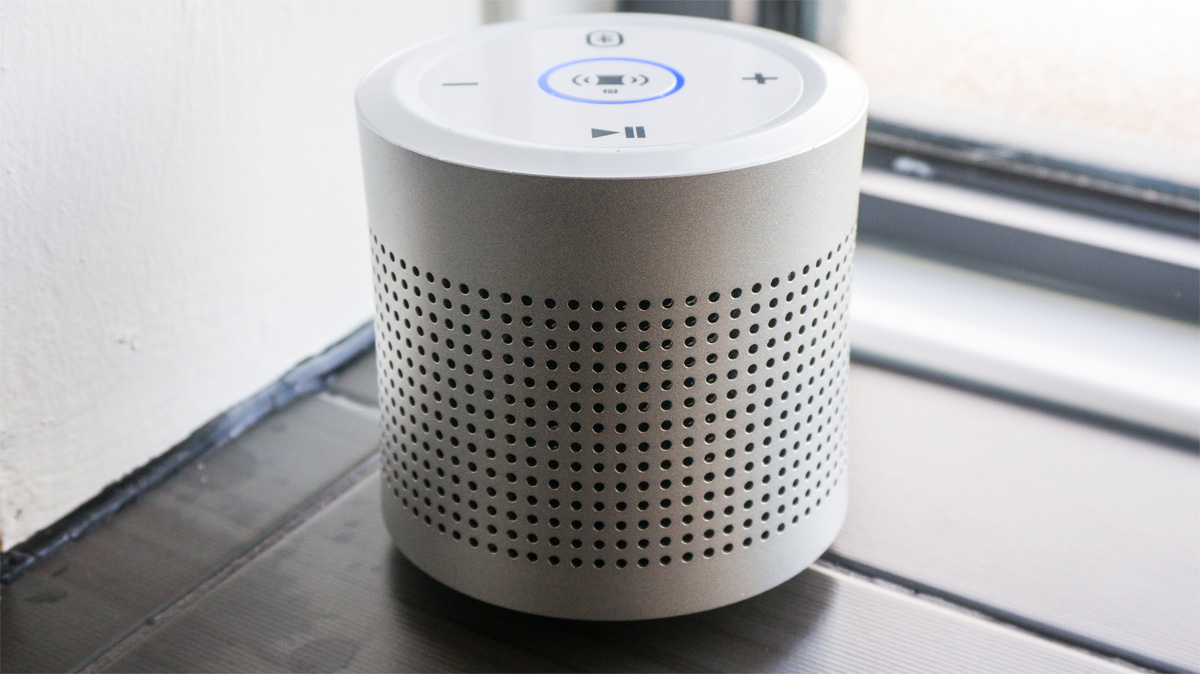 Though the speaker is quite loud, we wouldn’t describe the audio as room filling. However, with this being said, using Lightning mode did improve its prospects, providing a more rounded audio experience. It’s worth mentioning that even when Lightning mode is active, the bass, while more prominent, isn’t quite as strong as we’d like, though this means there is no danger of the bass levels drowning out the mid-range or vocals.

If you’re looking for a decent all round speaker with fairly balanced audio, the Thunder is the ideal candidate.

That’s all very well and good, but a portable Bluetooth speaker needs to have a decent battery life if its to be successful. The good news is that the Cowin Thunder boasts a lithium-ion rechargeable battery, which can be charged via any micro-USB cable. This, in theory, means that you could use a battery pack to charge the speaker if it runs out during a trip.

Cowin claims that the Thunder has an average battery life of around eight hours, though we found this would depend on a number of factors including volume and whether or not we were using its normal mode, or lightning mode. We’re not sure how much Lightning mode effects the battery life, but we noticed a slightly shorter battery life when using it.