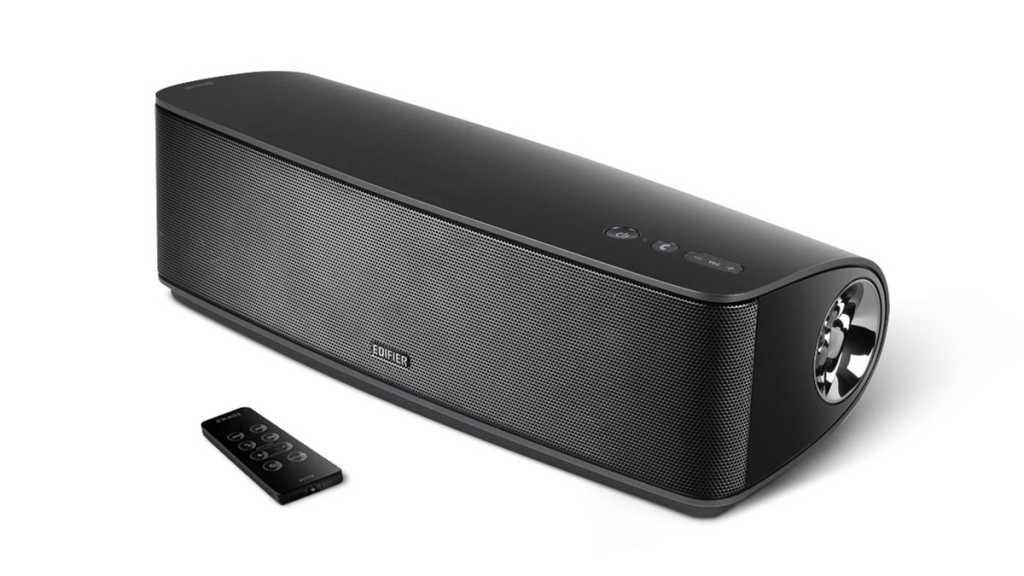 The Edifier Bric Connect is a great Bluetooth speaker for the home, though we’re not too sure we’d take it out and about with us on our travels. It’s too big to be truly portable, and the fact that it requires 6 AA batteries means that it isn’t as convenient as we’d like it to be. Audio quality is great, and the level of bass produced is better than others we’ve seen at a similar price. The addition of a remote is a nice touch too, and further solidifies our idea that the speaker is more suited to the home than the great outdoors.

The Edifier Bric Connect is a sub-£100 Bluetooth speaker that offers something slightly different to the standard Bluetooth speaker experience, including a mains adaptor that allows it to be ‘always on’ and a remote control to control playback. With this said, is it worth paying out for, or should you opt for something like the Denon Envaya Mini? Read on and find out.

Let’s first discuss the design of the Edifier Bric Connect, as the Bluetooth speaker certainly makes a statement. From the first glance, you can see that the Bric Connect looks sleek and elegant, and though it is quite large (300x90x133mm) for a Bluetooth speaker, its design somehow masks this. As well as being bulky, it’s also quite heavy, weighing in at a rather surprising 1.4KG, despite the fact that it can be used as a portable Bluetooth speaker.

It’s available in black or high-gloss white, though we must admit that we prefer the grey and black colour scheme of the darker model, complimented by small chrome-like detailing used in the bass reflect port at the rear. Its lighter companion does maintain the speaker’s sleek exterior, however we felt that from a design perspective, the black model has more presence. 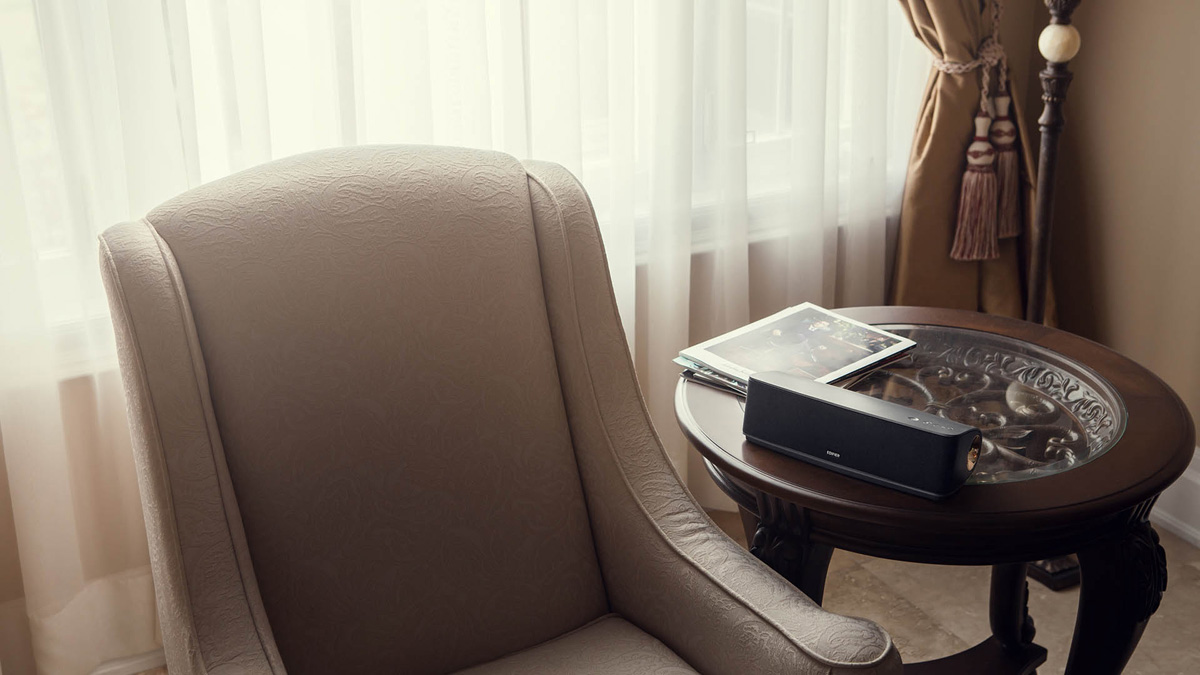 Its sophisticated design is suited more to the home than outdoors in our opinion, especially with no kind of water, dust or shock resistance provided with the speaker. It certainly isn’t on a par with the likes of the UE Roll in terms of its indestructibility, but with this being said, it’ll suit many users both at home and away – as long as you don’t plan on going swimming with it!

The Edifier Bric Connect features both Bluetooth and an auxiliary input, allowing both wireless and wired devices to make use of the room filling audio the speaker produces – but more about that later.

It features a built-in speakerphone, which can be used for voice calls, conference calls and even video calls, if required. Simply pair the speaker to your device and whenever you receive a call, it’ll be directed through the speaker. You also have the option to answer the call via the remote, which is handy for those times where you’re being called and can’t find your phone (or is that just us?).

Wait, did they just say remote? We did indeed. Even though the majority of users will be controlling the music directly via the device its playing from ( phones and tablets most of the time) the Edifier Bric Connect also offers a remote with full media controls, including a button to switch between the two input options. The remote even has a hidden compartment underneath the speaker, which allows you to safely store the remote when not in use – a life saver for those of us that regularly misplace small accessories. 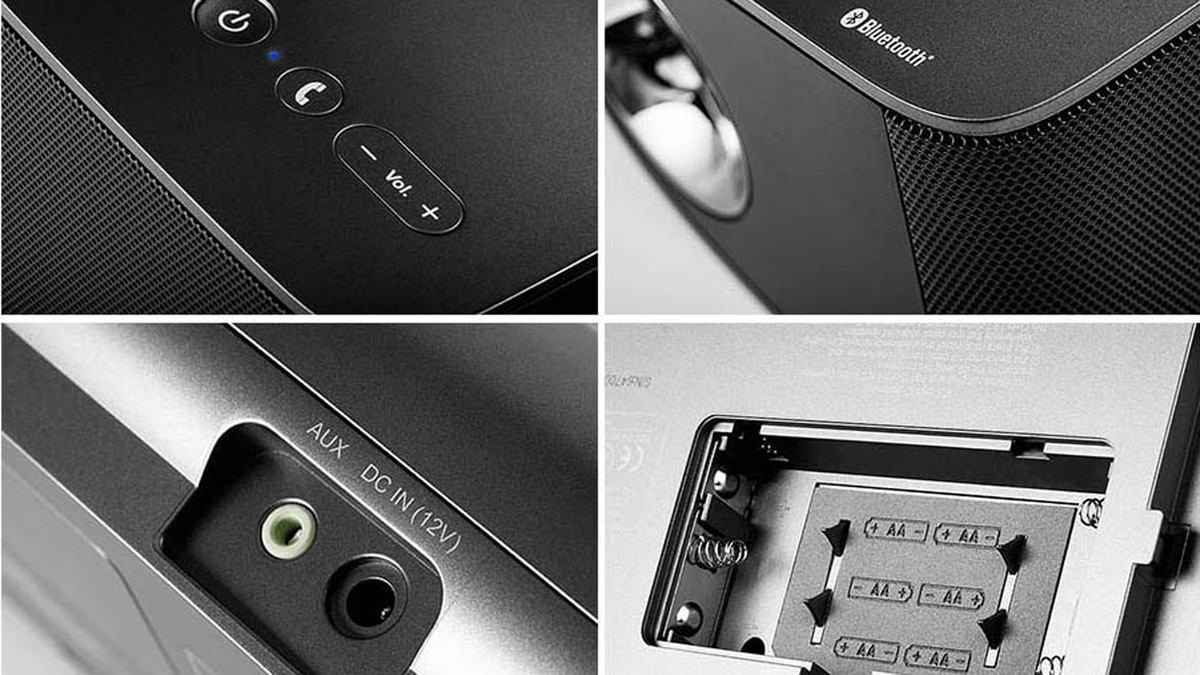 But what happens when you want to venture out with the Bric Connect? The good news is that the speaker can also be powered via batteries, but not the lithium-ion rechargeable ones that you’re probably expecting. Instead, the Bric Connect requires six AA batteries to power the speaker wherever a plug isn’t available.

We’re not quite sure why Edifier decided to go down this route, as rechargeable batteries are usually preferred by consumers. Sure, they may not last as long as traditional batteries, but they require little effort to recharge and don’t cost upwards of £5 (if you’re buying 6 Duracell’s, anyway) to replace once they run out! Opting for a built-in rechargeable battery is a lot more convenient for consumers, too.

Let’s move onto the most important section of any speaker review, and discuss the audio quality produced by the Edifier Bric Connect. In terms of what’s featured in the speaker, it houses a Class D amp with two 70mm (2¾in) full range speaker drivers, as well as a bass reflect port at the rear, which is vital for great-sounding bass audio output. All this equates to well rounded, room filling audio that we think is well above the Bric Connect’s £77 price tag.

The main cause of shock was the levels of bass produced by the speaker, as we’d only heard a similar level of bass produced by two-piece systems. Don’t get us wrong – it’s not enough to shake the walls and cause pictures to fall down, but its enough to loose yourself in, especially with bass-y songs. It doesn’t drown out the mid range either, which is an issue we’ve experienced with Bluetooth speakers in the past. Vocals sound rich, and the speaker performs as well playing acoustic music as it does playing Dubstep.

But what about at high volume? Many sub-£100 Bluetooth speakers suffer from the same issue, where the audio becomes distorted and unenjoyable to listen to at high volume. However, even at the highest volume, the Bric Connect showed no signs of distortion and produced similar levels of quality to when its played at low volume.