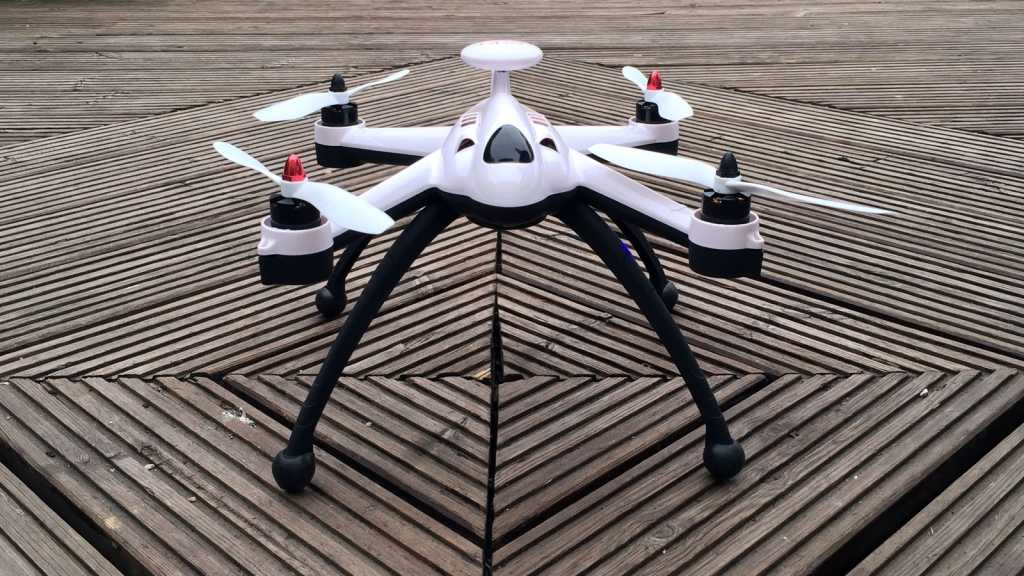 The Flying 3D X8 is a good value quadcopter and a reasonable alternative to a DJI Phantom if your budget can’t stretch even to a Phantom 3 Standard. You’ll have to allow for import duty and handling fees if you buy from GearBest which supplied the X8 for review, and don’t forget to budget for extra batteries and a gimbal and camera if you want to record aerial footage.

There are plenty of budget drones around if you want a cheaper alternative to a DJI Phantom. Here’s our review of the Flying 3D X8 quadcopter, which currently costs £155.83 from GearBest. See also: Quadcopter buyer’s guide.

We should start by saying the Flying 3D X8 isn’t new. It’s been on sale for roughly 18 months, but that’s no bad thing. Successive firmware updates have ironed out some issues, while a build quality issue concerning cracks in the plastic housing beneath the motors has also been sorted – we’re told.

The X8 is a distinctive quad, with its GPS receiver perched on top and a ‘cockpit window’ at the front, making it look more like a miniature spy plane than most. The long landing legs arc out from the body giving decent stability as well as good height clearance if you want to install a gimbal and camera. The WLToys V303 isn’t quite tall enough as standard.

There are four holes for mounting a gimbal (the Walkera G-2D fits) as well as connectors for 12v power and tilt control.

In addition to GPS for holding position, the X8 also has a barometer for holding altitude and a compass so it knows in which direction it’s flying. The quad will return to home if it’s running low on power (if you set a return point) and it will also try to auto land.

The battery is a 2200mAh Lipo with a T-dean connector and slides into the rear of the quad in a plastic tray. It’s all a bit awkward and the sharp plastic will no doubt cause you to bleed at some point.

Flying time is roughly 15 minutes, and spare batteries can be picked up easily for around £10-15 so it’s cost effective to increase flying time.

We’re fans of the remote control with its large LCD display and lots of controls. On the LCD you can see all sorts of stats such as the quadcopter’s battery voltage, heading and altitude. You can also use it to change settings through the menus. It’s a basic dot-matrix mono LCD, but it’s valuable.

Only the right-hand control stick is sprung. The left-hand one is used for throttle and can work in two basic ways. First, it can operate as a real throttle, so moving it up from the bottom increases thrust, and returning to the bottom (and keeping it there) will cause the props to stop spinning. Second, it can work like a Phantom – or the V303 – and movements above half way make the X8 rise, with movement below 50 percent making it descend.

There are also two potentiometers, one of which you can use to control the camera’s tilt. The function of the other is something of a mystery as the manual is appalling. In fact, you’ll find yourself using forums and Google to try and find out what the status LEDs mean as the manual negates to list all the different sequences, or the various beep coded emitted by the transmitter.

It takes four AA batteries (not provided) and also has a trainer port at the back. You don’t get a cable (or software) in the box though. Talking of the box contents, you don’t get any spare props, so order some with the drone. It takes 8045 props – 8in in length. Like the V303 they’re not self-tightening so you will need a spanner (also not provided) to tighten the dome nuts.

If you try to turn on the quad without the switches and sticks in the right places it will beep and refuse to start up. When you’ve got it right, you’re basically in non-GPS mode and can fly the X8 manually. This isn’t all that easy and it’s better to flip the left toggle switch to the bottom to GPS mode. This is the default mode for a DJI Phantom and means the quad will hover in place if you let go of the sticks.

With the X8 you have to leave the left stick in the middle as there’s no spring. But it flies stably and has decent power in its motors and props to ascend quickly. It can cope with light wind like most 350-sized quads.

We found that it struggled to find enough satellites to get a GPS lock unless we waited a good few minutes. This wasn’t a problem with the Phantoms we’ve tested nor the WLToys V303.

It’s good to have the information on the remote’s display so you can check altitude and voltage at a glance while flying. You’ll get a warning when the battery is running low and there’s also a return to home function that will enable if the quad loses connection with the remote or if you flip the right-hand switch.

Claimed range is 1000m but this is double what you’re allowed under the current CAA regulations – the maximum allowed altitude is 400ft.