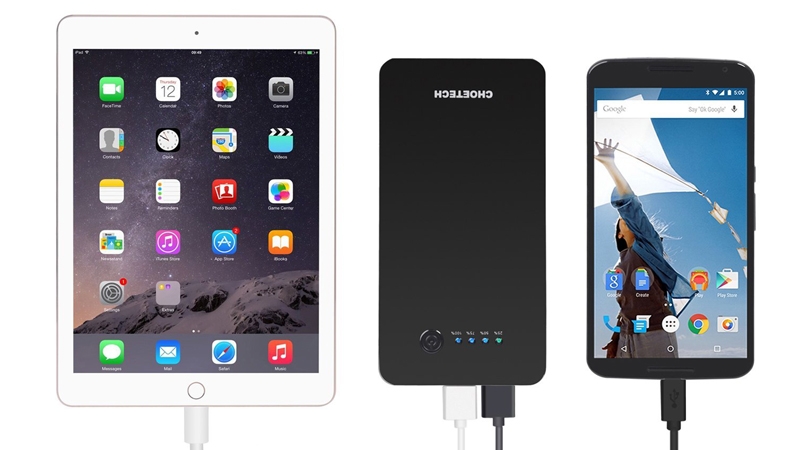 We can’t say enough just how pleased we are with the inclusion of Quick Charge 2.0 support in this power bank, and if speed is important to you then no doubt you’ll feel the same. iPhone users will also appreciate the Lightning input, although the Quick Charge functionality will be of no use to them. In other respects there is nothing standout here, so if you won’t benefit from Quick Charge or Lightning you should look elsewhere.

After months of seeing multiple variations on the same theme when it comes to  power banks, in the past two days we’ve seen two new functionalities that have been introduced to these portable phone- and tablet chargers. Also see:  Best power banks 2018.

Yesterday we reviewed the MiPow Power Tube 3000, which includes Bluetooth connectivity so you can pair it with an app and monitor the remaining capacity and device temperature – a hot topic, thanks to a recent EE Power Bar fire-safety scare.

Today we have the Choetech Portable Power Bank, the first power bank we’ve seen to include support for Qualcomm Quick Charge 2.0 – and not only for charging your devices but also for refilling its own battery, which means you could refill this high-capacity bank in just 7.5 hours.

If you have a phone or tablet that supports Quick Charge, you’ll know just how welcome a feature it is. Qualcomm Quick Charge 2.0 is able to reduce charging time by up to 75 percent, and in the case of our own Samsung Galaxy S6 we can obtain a 40 percent charge in just 30 minutes. Having tried it, I actually wouldn’t buy a phone without it. Also see:  How to improve smartphone battery life.

With our phones now an essential part of our daily lives, and hardware getting more powerful with every new release, battey life is an issue; the ability to get enough charge for several hours’ use in literally a few minutes is an absolute lifesaver. Incorporating that functionality into a portable power bank is genious. Also see: Best MiFi 2016.

We say portable, but the Choetech – for all the great tech that lies inside – is a bit of a brick. It’s a shiny brick, thanks to its glossy black coating, but this does little to hide its size and actually makes it feel a little cheap. (And cheap it isn’t, at £33.99 from Amazon UK – at least not when compared to many rival power banks of this capacity.) The Choetech measures 147x78x16mm, and weighs a hefty 356g.

To be fair, the Choetech does provide 15,600mAh of power for charging up a connected phone and/or tablet. Most power banks, unless the manufacturer specifically states otherwise, hover around 65- 70 percent efficiency. This means not all of that 15,600mAh of power will make its way to your devices; instead, you should expect something closer to 10,500mAh. That’s still plenty of juice, mind, and would fill our Samsung Galaxy S6 four times, or a smaller-capacity iPhone battery something like five- to six times. Also see:  Best desktop chargers 2015.

Talking about iPhones, if you have a phone or tablet that doesn’t support Quick Charge you’ll note there are two outputs and two inputs on this Choetech power bank. Input 1 is a 5V 2.1A (5.5W)/9V 1.5A (13.5W) Micro-USB port that supports Quick Charge; to refill the bank just pair it with the charger that came with your Quick Charge-compatible device. Input 2 is a Lightning port, making refills easier for iPhone users who are unlikely to have a Micro-USB cable to hand (although one is supplied in the box). This operates at the slower speed of 5V 2.1A or 5.5W.

That’s it for the ports and connections, and the only other hardware control you’ll find is a power button on top of the Choetech Portable Power Bank. Beside this are four LEDs with the legends 25-, 50-, 75- and 100% to show how much power remains. The power button is used to see the capacity status at a glance, and also to begin charging, since the Choetech doesn’t support auto-on. Also see:  How to charge your phone or tablet faster.

Another feature the Choetech doesn’t support is passthrough charging, which is the ability to charge both the power bank and a connected device at once. We’re happy to ignore this gripe, however, given that charging time is greatly reduced for both phone and power bank via Quick Charge.

Also missing is a soft carry case and an LED torch, two things commonly provided with the vast majority of power banks. But you know what we’re going to say: who cares – it supports Quick Charge!

In all honesty, though, were it not for the inclusion of Quick Charge support and the ability to refill the device via either Micro-USB or Lightning, the Choetech would be a very standard, albeit high-capacity power bank. If your phone doesn’t support Quick Charge, or the Lightning input is of no use to you, we would advise you to look elsewhere. (Like in our  best power banks chart.)