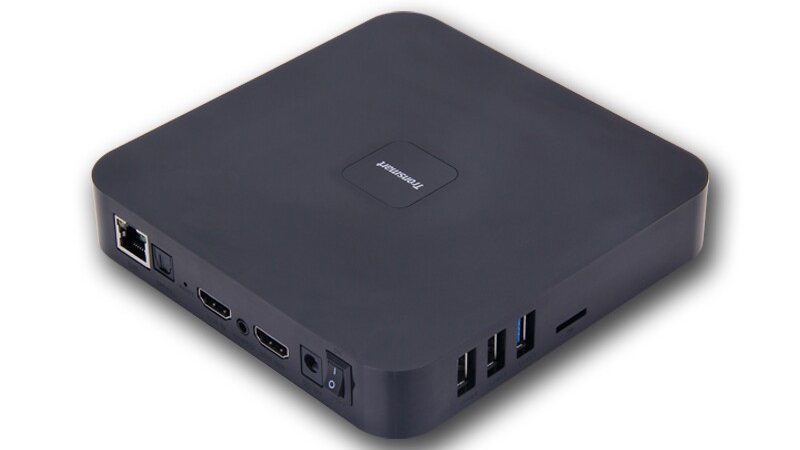 For the money the Tronsmart Pavo M9 is a a perfectly adequate device that plugs into your TV to allow the downloading of apps, recording over HDMI and up to 4K streaming. Performance isn’t out of this world but, again, it’s adequate. A useful device for turning a dumb TV smart.

Tronsmart’s Pavo M9 is an Android TV box that plugs into your TV via HDMI and turns it into an Android computer. It supports up to 4K streaming (depending on your TV), as well as HDMI-in recording. At £59 it’s a good buy, but the inclusion of Bluetooth could rule out a few headaches. Also see: How to connect Android to TV.

This is the second Tronsmart Android TV box we’ve reviewed, having previously seen the Tronsmart Draco HW80. This one is not only cheaper, at £59.81 from Geekbuying.com, but there are several reasons why we prefer it. (Also see our advice on buying grey-market tech.)

The plastic Pavo M9 is surprisingly better-looking than the metal Draco HW80. A sleek black box with rounded corners, this smaller Tronsmart Android TV box omits the ugly antenna seen poking out of the Draco’s rear. Front the front all you see is a power button and the remote sensor, at the side sit three USB ports (2x USB 2.0, 1x USB 3.0) and a microSD card slot, and everything else is tucked away at the rear.

Despite the external power brick (note that you’ll need a UK adaptor which Geekbuying will supply on request), it sits nicely under the TV, and silent running means it won’t raise any eyebrows in the living room.

The supplied remote control is also better-looking and significantly easier to use than that supplied with the Draco, but even so you’ll want to add a mouse (a wired mouse). There is an app you can download to your phone or tablet that lets you use it as a controller, but both must be connected to the same Wi-Fi network in order to pair, and we found that after closing the app it wasn’t able to pick up the Pavo M9 without a restart.

You’ll get away without needing a keyboard, thanks to the onscreen keyboard, but not using a mouse with this TV box really does incur more pain than it’s worth.

Setup, the second time around, was a cinch. On our first attempt we unwittingly made life difficult for ourselves having hooked up the Tronsmart to an old projector sat at ceiling-level that refused to adjust its display size over HDMI.

Although there is an option in the Display settings of the TV box itself to reduce the display size (you can independently adjust top-, bottom-, left- and right edges – that’s better than the Draco, which lets you alter only the overall size), we couldn’t see this because it was on the ceiling rather than the wall. The fact we couldn’t see the top of the screen made it impossible to use the remote control as a mouse, and it was equally impossible to use a wired mouse in mid-air.

On top of that we had tethered the Tronsmart to our phone’s internet connection, which meant we couldn’t connect both phone and TV box to the same Wi-Fi network to make use of the remote control app. Talk about making life more difficult than it needed to be.

The second time around we connected the Tronsmart to an HDMI TV with a single cable, connected to the home Wi-Fi network and logged into our Google account. That was it. Easy peasy. See all Android how tos.

Once up and running the Tronsmart Pavo M9 looks very different to the Draco HW80. Whereas the latter has a standard Android KitKat interface, and looks very much like a large-screen tablet but without the touchscreen, the new Pavo M9 has a custom user interface, also based on KitKat.

Finding our way around the various menus did take a little bit of getting used to, especially getting our heads around the two settings menus, but we liked the fact it made the Tronsmart seem more like a home-entertainment device and a proper Android TV than a glorified tablet. OTA updates are available for the Pavo M9, too.

One of the menu options opens an app tray, which is the closest thing you’ll get to standard Android. You’ll also find menus for the browser, games (none are preinstalled, but you will see several shortcuts to download apps from Google Play), video, music, an app manager, settings (different to the settings app in the app manager and also where you find the weather and parental controls), media centre, HDMI (for recording from the HDMI input) and Google Play.

Thanks to full integration with Google Play, we had no problems installing TV favourites such as iPlayer, Netflix and TVCatchup. We also installed our usual benchmarking apps, which ran fine with the exception of GFXBench – it doesn’t tend to play nicely with lower-spec hardware.

And, unsurprisingly, that is what you get for your £59. Inside is a 1.5GHz Mstar MSO9180D1R (Cortex A9) processor with Mali450 graphics, 1GB of DDR3 RAM and 8GB of flash storage. If you need more storage you can make use of the microSD card slot, plug in a hard drive via USB, or access cloud- or networked storage.

The Tronsmart’s performance results were nothing to shout home about, and would be disappointing on a phone or tablet, yet it performed adequately when connected to the TV. There was more lag when launching apps and menus than we might find in KitKat on other devices, yet it was certainly no slower in this regard than any of the smart TVs we’ve tried.

In Geekbench 3.0 we recorded 336 points in the single-core component and 1071 points multi-core. SunSpider clocked the Tronsmart at 1941ms, and in AnTuTu it posted a score of 19067 points.