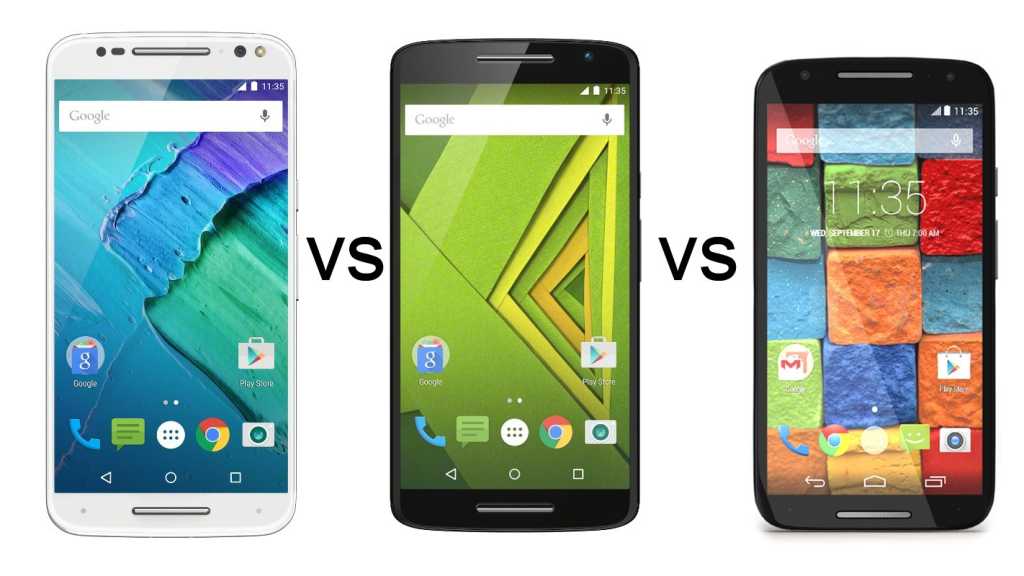 Which is the best phone then? The Style is the obvious winner, as long as you don’t mind a bigger, heavier device, and one without an AMOLED display. It might sound like a lot of compromising, but at £359, it looks like pretty darn good value to us when compared to the most expensive flagships. If you’re already the owner of a 2nd Gen Moto X, you might prefer to stick with what you have, especially if you bought it for the AMOLED screen, or consider a completely different phone as an upgrade. The Play is something of an unknown quantity until we’ve established how long that big battery lasts and what real-world performance is like. Again, though, it looks to be a good mid-range phone for some people.

The pair of new Moto X phones offer something a little different in the Android world and could be a good option if you can’t stretch to a flagship from Samsung, HTC and others. Here’s our Moto X Style vs Moto X Play vs Moto X 2 comparison which will help you understand how the three models differ and which might be the best buy for you.

You can also read our hands-on reviews of the Moto X Style and Moto X Play.

Motorola has been aggressive on pricing, saying these are flagship phones but at hundreds of pounds cheaper than Samsung’s. Also see: Moto X4 latest rumours

We’ll talk about specs below, but it’s fair to say that the Play in particular is not what everyone would call a flagship phone.

The Moto X Style sits right at the top, and will cost £359 for the base model (32GB) when ordered via Moto Maker, Motorola’s online custom-build tool.

The Moto X Play starts at £299 when ordered through Moto Maker, and that’s for the 16GB version. It should be available for £279 if you’re happy to go with a standard base model with no customisation.

The second-generation Moto X was more expensive when it launched at £420. It’s now available for around £280 if you shop around online.

All three phones have a similar design. The ‘signature’ curved back and a metal frame makes the Moto X comfortable to hold and also makes it feel thin and sturdy.

None are particularly thin phones overall, but because they taper to just a few mm at the sides, you don’t notice that the thickest point is around 10mm – around 3-4mm thicker than the thinnest phones.

The new models have bigger screens, but the high screen-to-body ratio means they’re not drastically larger than the second-gen Moto X, and the Play is certainly a lot smaller than the iPhone 6 Plus which has the same 5.5in screen.

Here’s how the dimensions and weights compare:

So, the Style is pretty much the same size as a Samsung Galaxy Note 4, and the Play is roughly equal to an LG G4.

Motorola talked about a water-repellent coating on the base Style model, but this is meaningless for most purposes. It’s not water-resistant like the new Moto G, so you can’t submerge it and we’ve found that most phones can withstand “light rain” and “occasional splashes” without water-repellent coatings. They generally survive and are none the worse off.

Only the Moto X Play has a removable back, but not a removable battery. Think of it more like an accessory: backs are interchangeable for style. Both new phones have microSD slots for up to 128GB of additional storage, whereas the 2nd Gen Moto X had no expandable storage.

It’s hardware and specs which make the most interesting comparison. Let’s start by looking at the key specs for the three phones:

So, it’s clear that the Play is a cut-down version of the Style, hence the lower price. We’ve yet to run our benchmarks on the Style and Play, but we expect that the Play will be a similar performer to the 2nd Gen Moto X. The Style should be quicker thanks to its extra 1GB of RAM, extra cores and faster graphics chip.

Screen size and resolution (and dimensions and weight) increase with each model. What’s more important is that Motorola has switched from AMOLED in the 2nd Gen Moto X (and first-gen) to more traditional IPS screens for the Style and Play.

For some this isn’t a big deal, while others are up in arms about the decision. It’s almost certainly down to cost cutting: IPS screens are cheaper. AMOLED has (at least) two advantages over IPS: power saving and visibility.

One of the benefits of buying a Motorola is a ‘pure’ Android experience. In other words, you don’t get a different interface applied over Android by the manufacturer. Motorola adds value with useful apps, such as Moto Assist.

On the 2nd Gen Moto X, Active Display meant you’d see notifications even when the phone was in sleep mode. Because AMOLED means you only need to light up enough pixels to show the notification, this saved power. With IPS, you have to light up the whole screen (with the LED backlight) if you want to display anything, so it’s more of a power drain.

Second – and this may sound minor or irrelevant to some – AMOLED doesn’t have the limited viewing angles of IPS when wearing polarised sunglasses. When you’re using your phone as a satnav and wearing sunglasses, you might find you can’t see the image on a phone with an IPS screen at all, but it’s a non-issue with AMOLED.

IPS screens are still perfectly good, and from what we’ve seen of those on the Play and Style, you won’t be disappointed with their quality, brightness or contrast. Let’s not forget, too, that the Style in particular has that whopping Quad HD resolution and tiny bezels. It’s an impressive-looking phone.

Cameras, of course, are another big difference between the 2nd Gen and new models. We’ve yet to compare photos and videos side by side from all three models, but from the snaps we took at the launch, it was clear the cameras are a big upgrade from the 2nd Gen Moto X.

What’s disappointing is that the Play can’t capture 4K video, but does have what Motorola is calling ‘video stabilisation’. It does this in software though. It also lacks 802.11ac Wi-Fi which the 2nd Gen Moto X had (and the Style also has).

The big 3630mAh battery is the Play’s highlight. Again, we’ll find out how long it lasts when we have the phone long enough to benchmark it, but we’re sure Motorola’s two-day claim isn’t fantasy.

The 2nd Gen Moto X launched with KitKat 4.4, but was upgraded to Lollipop. This means all three phones can run the latest version of Android, and they’re all using the unadulterated version, as we’ve mentioned.

We’ve yet to spot any major differences between Moto Assist on the 2nd Gen Moto X and the new models. You’ll find it useful as a hands-free aid for listening to- and replying to messages. It will also silence your phone during a meeting, or when you get home – if that’s how you choose to configure it.

Essentially, there’s nothing much to choose between the three phones aside from the revamped camera app on the Play and Style. This offers lots of shooting modes and along with the better, faster cameras, means you’ll get better photos and videos than on the ‘old’ phone.