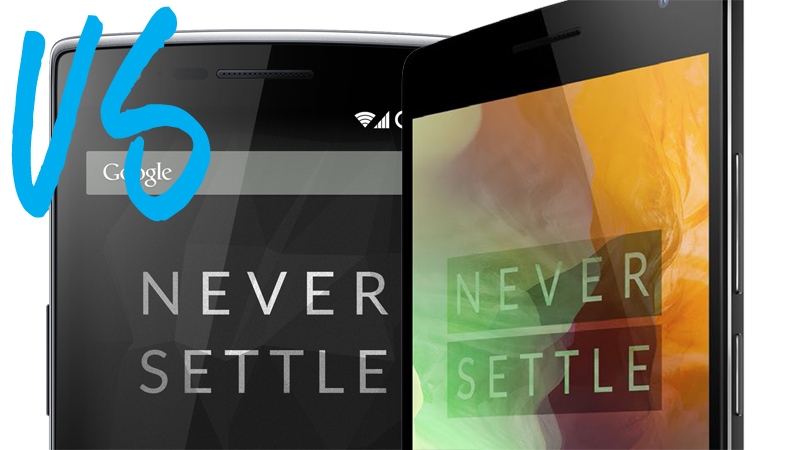 Given the massively improved specification of the OnePlus 2 over the OnePlus One, and the new features such as the fingerprint scanner, USB Type-C support and better camera, there’s very little reason why you would want to choose the OPO over the OP2. Yes, the OnePlus 2 is a little more expensive, but it’s still drastically cheaper than rival flagships that cost closer to £600. Our only worry with the OP2 is how easy it will be able to get hold of, despite the all-new invitation and reservation system. If the OnePlus 2 proves as difficult to get hold of as did the OnePlus One, you may find you have a choice of OPO vs OPO rather than OPO vs OP2.

Earlier this week OnePlus unveiled its OnePlus 2 phone. We look at what’s new in the OP2 in our OnePlus One vs OnePlus 2 comparison. It’s OPO vs OP2. Also see OnePlus One review and OnePlus 2 hands on review

Tomorrow we’ll be getting our first look at the OnePlus 2 and will bring you a hands-on review as soon as is physically possible. Until then, in this comparison review we are merely comparing the specifications between OPO and OP2. Also see: OnePlus Power Bank review.

OnePlus One vs OnePlus 2: UK price and availability

‘OnePlus’ and ‘availability’ don’t sit well together in the same sentence.

Today you can buy the OnePlus One direct from OnePlus’ store ( https://oneplus.net/uk/oneplus-one) at £179 for the 16GB model, and £219 for 64GB. Technically. Right now it’s out of stock. OnePlus says it will be back in stock very soon, but in the meantime you can still pick up a OnePlus One from various online distributors, potentially at a higher price. Also see: Best new phones coming in 2015.

This apparent ease of purchase hasn’t always been the case. For a long time you could purchase the OnePlus One via invitation only, won through a series of competitions and giveaways. OnePlus then offered a series of flash sales, and later began offering the phone for sale once a week on a Tuesday. Only recently has the OnePlus One become available to buy whenever you like. (Except today, obviously.)

With the OnePlus 2 we are returning to the invite system – but an improved system, according to OnePlus. Importantly, 50 times more invites are available this time around, so it should be much easier to secure one.

OnePlus has also introduced a reservation list, so you’ll get notified the next time invites are available without having to watch social media like a hawk. You can join the OnePlus 2 registration here.

OnePlus One vs OnePlus 2: New features in the OP2

As well as the list of hardware upgrades we’ll detail below, the OnePlus 2 has a slew of new features when compared to the OnePlus One.

When you first turn on the phone you’ll be greeted with a new OS. Whereas the OnePlus One ran CyanogenMod 11S, based on Android KitKat 4.4, the OnePlus 2 runs the firm’s own OxygenOS. OxygenOS is a custom version of Android 5.1.1 Lollipop, which OnePlus says includes subtle customisations such as screen gestures, the ability to switch between hardware- and capacitive buttons, and toggle quick settings. There are also custom apps such as Camera, Audio Tuner and File Manager. We’ll be taking a closer look at OxygenOS tomorrow.

For device security there’s a brand-new fingerprint scanner on the rear, for which you can store up to five fingerprints. OnePlus says it is faster than the iPhone’s TouchID version, able to unlock the phone in less than half a second. See all smartphone reviews.

And there’s an ‘Alert Slider’, which is the first of its kind we’ve seen. This slider sits on the phone’s left edge and lets you move through three custom notification options without removing the phone from your pocket: None disables all notifications; Priority allows you to receive notifications only from certain contacts; and All lets you receive all notifications.

Also new to the OnePlus 2 is USB Type-C support, which is set to replace Micro-USB as the charging standard as Google builds in support to the forthcoming Android M OS. Both ends of the OnePlus 2’s flat charging cable are reversible, which is pretty cool.

The OnePlus 2 is now a dual-SIM phone (dual-standby), and we understand that both its nano-SIM slots support 4G LTE – that’s not at all a given. Also see: Best dual-SIM phones and dual-SIM phone buying advice.

OnePlus One vs OnePlus 2: Build and design

Whereas the OnePlus One came in Silk White or Sandstone Black, the OP2 is available in Sandstone Black plus four additional finishes. You will also be able to buy Bamboo, Black Apricot, Rosewood and Kevlar StyleSwap covers for the OnePlus 2 (these replace the phone’s rear cover without adding to its overall size), although prices are yet to be confirmed.

Aside from the aforementioned fingerprint scanner, Alert Slider and USB Type-C port, there aren’t many major differences in build. OnePlus says the OP2 is a continuation of the smooth curves and clean lines that defined the OPO. You’ll find metal-chamfered edges to the aluminium- and magnesium-alloy frame and a new physical home button. The volume rocker sits with the power button on the phone’s right edge, while the new Alert Slider is on the left. Also see: Best phones 2015.

OnePlus One vs OnePlus 2: Display

OnePlus uses the same display for the OnePlus 2 as it did the OnePlus One. And that’s not a bad thing, as it claims this 5.5in (full-HD 1920×1080, 401ppi) IPS JDI display hits the sweet spot between impeccable clarity, performance and battery drain. This panel has 1500:1 contrast ratio, 178-degree viewing angles and 600 nits brightness that is higher than the iPhone 6 and iPhone 6 Plus, LG G4, HTC One M9 and Samsung Galaxy S6. It’s also protected from damage with Gorilla Glass.

OnePlus One vs OnePlus 2: Processor, RAM, graphics and storage

Despite its significantly lower price, the OnePlus One was aptly named a 2014 flagship killer with hardware specs to match the best phones on the market at the time of its release. It uses a 2.5GHz Qualcomm Snapdragon 801 quad-core chip, 3GB of LPDDR3 RAM and 578MHz Adreno 330 graphics. Storage is either 16- or 64GB, with no support for microSD, and this hasn’t changed for the OP2. For battery life the OPO packs a 3100mAh lithium-polymer cell.

Things get a lot faster with the OnePlus 2, so it’s no surprise the company is now referring to it as a 2016 flagship killer. It’s swapped the 801 chip for the 64-bit octa-core 810 – and this is the second revision of this processor, said to overcome the overheating issues that allegedly caused Samsung to opt for its own Exynos chip in the S6 by intuitively assigning processors to certain tasks and avoiding the use of two or more cores that sit next to each other. The 810 allows for 4K Ultra HD video streaming, faster photo capture, immersive 3D gaming and strong battery life. The latter also gets a boost from a higher-capacity 3300mAh lithium-polymer battery.

All this amounts to what should be significantly faster – and smoother – performance in the OnePlus 2. We haven’t had a chance to run the OP2 through our benchmarks just yet, but you can compare the OnePlus One’s results (2570 points in Geekbench 3 multi-core, 877ms in SunSpider and 29fps in GFXBench 3.0 T-Rex) to all the latest phones we’ve tested in our article What’s the fastest smartphone 2015.

OnePlus One vs OnePlus 2: Connectivity

Bluetooth gets a boost from 4.0 in the OnePlus One to 4.1 in the OnePlus 2, but other connectivity specs are the same for both phones. That means you’ll get dual-band 802.11ac Wi-Fi, an internal GPS module with GLONASS and NFC.

OnePlus One vs OnePlus 2: Poll

OnePlus One vs OnePlus 2: Cameras

At a glance at the specs you might assume the OnePlus 2 features the same photography setup as the OnePlus One. Both feature 13Mp Sony cameras at the rear (also capable of 4K recording and slow-motion video shot at 720p, 120fps), and a 5Mp selfie camera at the front.

Actually, this camera has been improved for the OP2. While you’ll still find a six-element lens, f/2.0 aperture and dual-LED flash, new to the OnePlus 2 is its large 1.3µm pixels for better photography in low light, optical image stabilisation, and a fast Laser Focus that offers touch-free focus in under 0.3 seconds. Time-lapse video recording is also possible, and RAW image support will be added via an update shortly after launch. Also see: Best phone camera of 2015.

OnePlus One vs OnePlus 2: Audio

We haven’t had a chance to try out the audio capabilities of the OnePlus 2 just yet, but as before there is a bottom-facing speaker. There’s a 3.5mm audio jack, which comes as little surprise. Something that might take your fancy is the Audio Tuner software preinstalled with OxygenOS. This integrates MaxxAudio tech to let you set custom audio profiles for music, movies and games.

OnePlus One vs OnePlus 2: Software

As we outlined above, the key change in the software department is the switch to OnePlus’ own operating system, OxygenOS. OxygenOS supports off-screen gestures, custom hardware- and software navigation keys, easy notification access, custom icon packs, a multicoloured LED for notifcations (as before), dark mode (dimming the screen so you can use it at night without straining your eyes), app permissions, an enhanced file manager and adaptive brightness.

Shelf is an in-beta feature within OxygenOS that offers two widgets to a right-swipe from the home screen that feature your most used apps and contacts. Shelf can be disabled or enabled at any time.

You’ll also find the SwiftKey keyboard and an Audio Tuner that integrates MaxxAudio tech to let you set custom profiles for music, movies and games.