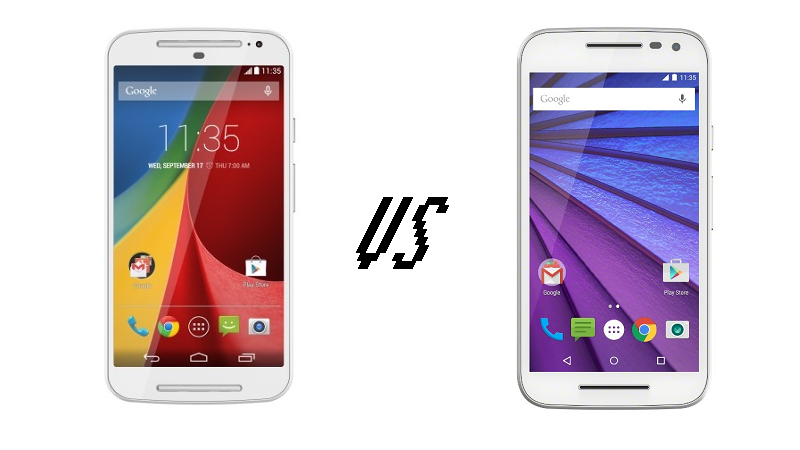 With the same screen and only a small processor bump, the reasons to upgrade to the Moto G 2015 are the new cameras, waterproof design and the ability to order with the Moto Maker – although that does make it more expensive and it’s not really a budget phone any more.

Motorola has announced the 3rd generation Moto G alongside the  Moto X Style and Moto X Play. The Moto G has been one of the most popular budget phones of all time so here’s how the new Moto G compares to its predecessor. Find out what’s changed in our Moto G 2015 vs Moto G 2014 comparison review. See: Best budget phones 2015.

The 3rd generation Moto G isn’t available at Amazon at the time of writing but Mobile Fun is expecting stock today (29 July) and Clove has stock. We haven’t spotted the 16GB Moto G 2015 at any retailers yet but we assume it will be around £30 more than the 8GB variant.

It’s worth noting that the Moto G 2015 is now available to order via the  Moto Maker meaning you can customise the phone to your taste (see below). Buying the phone this way will cost more, starting at £179.

See below for full pricing:

The Moto G 2015 looks pretty similar to the 2nd generation model but feels a bit more premium. It’s the subtle changes like the strip which houses the camera on the back and we also like the new stylish flush slots for the front facing speaker and earpiece.

Motorola has made the budget handset feel like a mid-range device even though it has got a little chunkier. It’s now 11.6mm and 157g compared to 11mm and 149g.

As alluded to, the major feature here is being able to customise the Moto G with Motorola’s Moto Maker which is a sort of ‘build a bear’ for phones. It costs more but you can choose which front colour you want, rear colour (cover), accent colours and other things like engraving.

Furthermore, Motorola has added IPX7 waterproofing which is the first time we’ve seen this feature on a phone this cheap. And that’s without needing a flap to cover the USB or headphone ports.

There are various hardware upgrades on the Moto G 2015 but the screen remains at both 5in and HD 720p so you’ll need to look elsewhere if you’re looking for a cheap phone with a Full HD display.

The processor has been upgraded to a Qualcomm Snapdragon 410 from the 400 which is 1.4GHz quad-core with an Adreno 306 GPU. Memory has indeed been bumped to 2GB of RAM but you’ll only get this with the 16GB storage capacity – the 8GB model has 1GB of RAM. As usual, there’s a microSD card slot for adding up to 32GB more.

With a small upgrade in the engine room, the biggest changes on the spec sheet of the Moto G 2015 are in the photography department. For starters, the front camera has jumped from 2- to 5Mp with a wide angle lens.

The main camera is now 13Mp compared to 8Mp and is the same sensor as found in the Google Nexus 6 which Motorola produced. Not only is it the shooter from Google’s flagship Lollipop phone, Motorola has made improvements including a new lens and an IR filter.

That all important 4G LTE support is there so hasn’t been dropped for this model and other wireless specs still include Wi-Fi 11b/g/n, Bluetooth 4.0 LE and GPS. However, there’s still no NFC which is a shame.

Last but not least is the battery which is still non-removable but has increased in capacity from 2070- to 2470mAh and Motorola promises 24 hours of ‘mixed use’.

Not much has changed in the software department as Motorola is still committed to offering a close to stock Android experience.

The Moto G 2015 comes pre-loaded with Android 5.1.1 Lollipop and the firm has almost kept things completely vanilla. It simply adds some Motorola apps like Migrate, Assist, Display and Actions which are all worthwhile additions.