Overall, the Moto X Play is a decent mid-range phone. But, it’s not the great upgrade which Moto X owners were looking for. The camera is good, as is the screen, but performance could be better – as could battery life. Had Motorola offered the dual-SIM version in the UK and made the phone waterproof, it would have had enough to be a decent alternative to the OnePlus 2. For many, this more powerful rival will be more appealing. It’s also cheaper and has optical stabilisation and the option to shoot 4K video. Yet, if you like the idea of creating your own custom phone and don’t want the hassle of getting an invite to buy a OnePlus 2, it’s really not a bad deal at all.

For 2015 most people expected an update to the 2014 Moto X, but Motorola launched three new phones: the Moto X Style, the Moto X Force and the Moto X Play. We’re looking at the latter here, which sits between the Style and the new third-gen Moto G for price. Also see: Moto X4 latest rumours

It also means that it’s close to the price of the new and impressive OnePlus 2 smartphone, which you can buy for £239 (16GB) or £289 for the 64GB model. It’s a big competitor to the Moto X Play and Moto X Style, as it too has high-end specs and features with a mid-range price tag.

Motorola may not have focused as heavily on design with the Moto X Play as it did with the Moto X Style, but it’s still a good-looking phone in our opinion, and we really like the new design of the area around the camera and Motorola logo.

The rear cover pops off like the Moto G’s which means it’s easy to personalise the phone with other covers. If you configure a Moto X Play on Motorola’s website you can choose between 12 colours for the rear, a black or white front face, plus an accent colour which colours the camera surround on the rear and the front speaker grilles. It doesn’t cost any extra and you’ll have a phone that won’t look identical to everyone else’s. Of course, you’re more likely to find a discount from other retailers selling the black or white ‘base’ models. 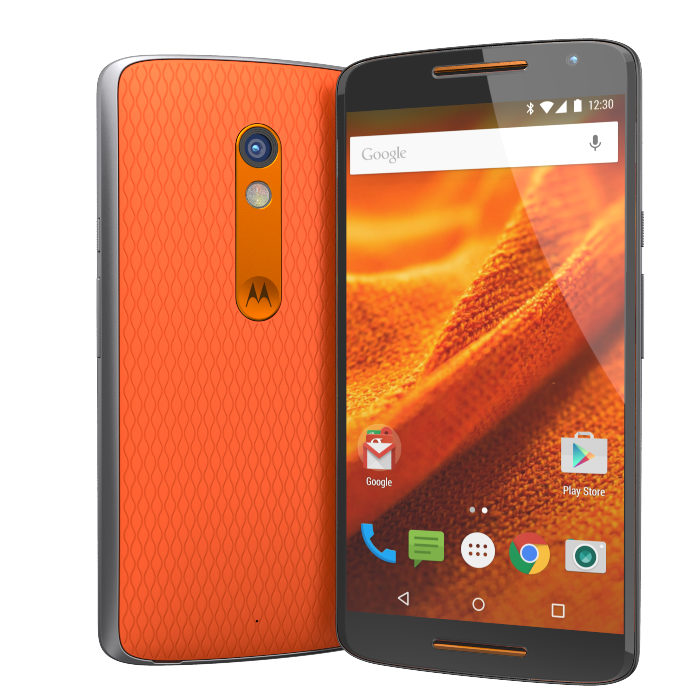 It weighs a reasonable 169g and is 10.9mm thick at its thickest point, but it’s curved to make it feel comfortable in the hand so it doesn’t feel like a bulky phone at all, particularly thanks to its thin bezels surrounding the screen.

Unlike the cheaper Moto G, the Moto X Play is merely water repellent, rather than waterproof. This means it should cope with the odd splash (as most phones can), but it won’t survive being dropped in the bath.

When you remove that cover there’s nothing to see or do: the 3630mAh battery is captive.

On the top edge is a centrally mounted headphone jack, plus a removable all-in-one nano SIM and microSD tray. For the UK model, the second nano SIM slot is blanked off. We don’t know why Motorola chose not to make it a dual-SIM model, but this gives the OnePlus 2 another advantage over the Motorola. The microUSB port is on the bottom edge. 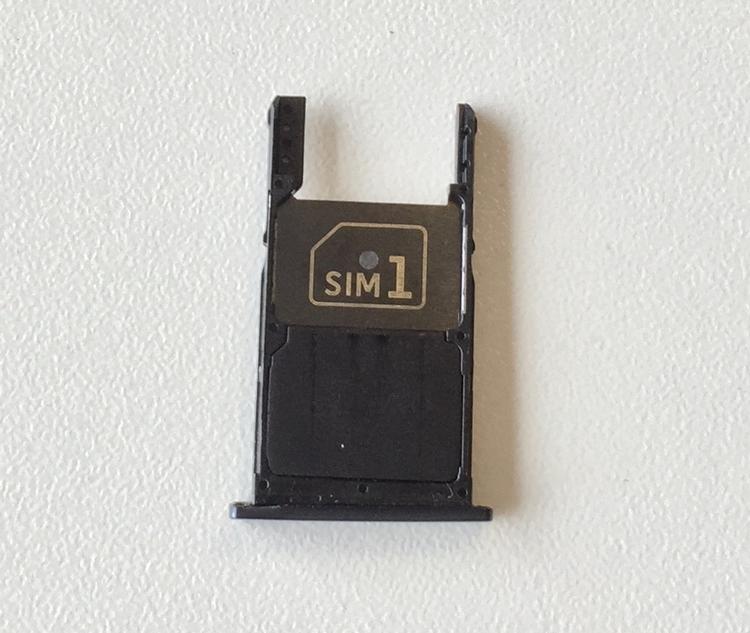 Like the new Moto G, the Play does not have stereo speakers at the front. Only the bottom grille hides a loud speaker – but even that sounds pretty good for videos and games (not so much for music).

One disappointment is the plastic volume rocker and power button. These are all on the right-hand side but are made from plastic and lack a premium feel. The volume rocker rattles, too. 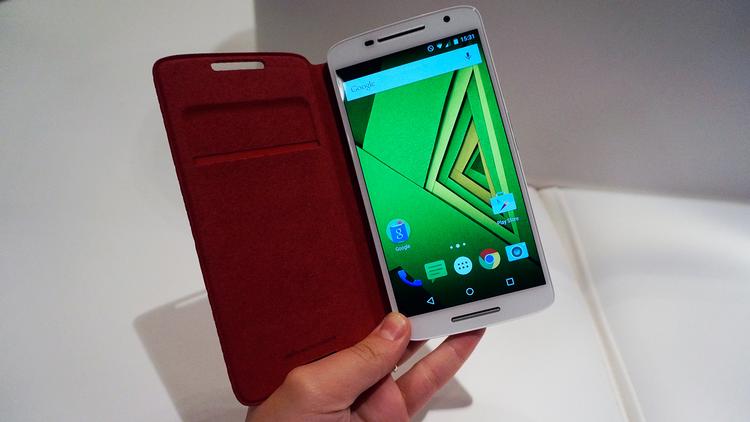 The display is a brilliant 5.5in 1080p Full HD screen, which is the same specs as the iPhone 6 Plus. The pixel density of 403ppi can’t quite beat the higher 520ppi of the Moto X Style’s 5.7in display, but it’s great quality nonetheless and you’ll enjoy using it to watch movies and play games.

Some will feel let down by the switch to IPS technology from AMOLED which the previous Moto X used. However, the Play’s screen is very good. Colours are vivid (we measured 90 percent of sRGB), and it’s also really bright at 678cd/m2, which means it’s easier to see what you’re photographing when outside in the sun.

Adaptive brightness is off by default so you’ll probably want to make that your first change in Settings. You can also switch from the default ‘Vivid’ to ‘Realistic’ colour – this seems to be an option added to appeal to those who prefer the more vibrant hues of AMOLED displays.

Whether you’re in or out, playing games, watching videos or just sending an email, the screen is a pleasure to use. It doesn’t offer the power saving features of AMOLED when you’re using the Moto Display feature though (see software below). 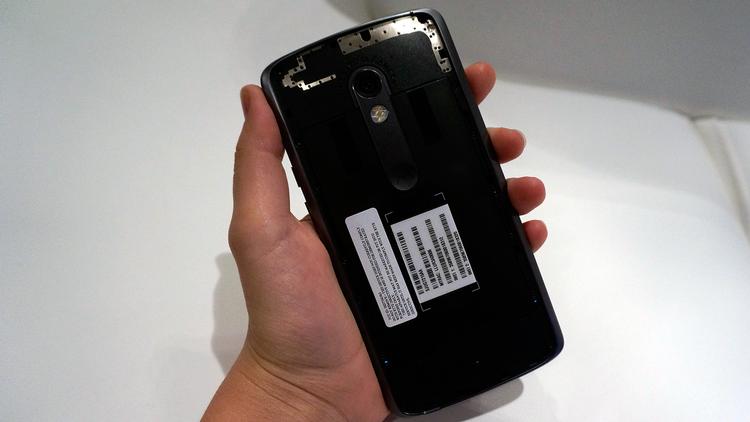 Inside the Moto X Play you’ll find Bluetooth 4.0 LE connectivity, but there’s no 802.11ac Wi-Fi like there is in the Moto X Style and even was in the 2014 Moto X. There is GPS and NFC, though.

A mid-range 1.7GHz Qualcomm Snapdragon 615 octa-core processor crunches the numbers, with Adreno 405 graphics and 2GB RAM. We found games such as Real Racing played fantastically smoothly on the Moto X Play, and it’s no different when navigating around Android Lollipop.

If you care about benchmark results (which you shouldn’t put too much faith in) then here’s the lowdown:

So, the numbers make it pretty clear that the Moto X Play isn’t a powerhouse and a ‘flagship killer’ like the OnePlus 2, but in general use you’ll struggle to notice a difference.

Storage isn’t hugely generous by today’s standards: there are 16- or 32GB to choose between (32GB bumps up the price by £40) but you’ve the ability to add 128GB more thanks to the microSD card slot, a welcome addition that wasn’t present in the previous Moto X models.

The battery is a 3,630mAh battery that should last for up to 30 hours according to Motorola. That’s with mixed use, of course – not 30 hours of video playback.

In our battery benchmark, the Play doesn’t last much more than a typical phone at 6 hours, 21 minutes. Of relatively intensive use.

This means you’ll probably end up charging it every night rather than every other as you might have hoped. Still, it depends on what you’re doing. If you’re watching offline video with a fairly low screen brightness, you should easily get through a long-haul flight – over 12 hours – before needing more power. And if you’re the sort of person who uses their phone only occasionally through the day, or mainly while commuting, then you could well be charging it once every two days.

Note, that the Play lacks the Turbo Boost feature boasted by the Moto X Style, so takes longer to recharge.

The Moto X Play does have one advantage: a good camera – the same camera in the Moto X Style, in fact. It’s a big improvement over the 13Mp camera found in the previous model, at 21Mp with an aperture of f/2.0 and several handy modes including Burst Mode, Night mode, Auto HDR and Panorama. It isn’t as good as the camera on the Nexus 5X or 6P, but it’s considerably cheaper than either of Google’s phones.

On the front is the 5Mp camera like the one in the Style, which is another improvement over the 2Mp sensor on the front of last year’s Moto X.

You get the minimal Lollipop camera app which doesn’t have a distracting interface – there isn’t even a shutter button. You just tap on the screen to take a shot, or hold your finger for a burst of photos.

We don’t like that there’s no indication of focus, so you never know if the picture will be sharp or not. Photos will be taken even if the subject is way too close and blurry, for example. Fortunately, focus is generally very fast and also accurate. We took the photo of a flower (roughly 60mm in size) below on a windy day and were a little surprised to find it very sharp (we’ve resized the photo from 5344×4008 pixels to 1600×1200). 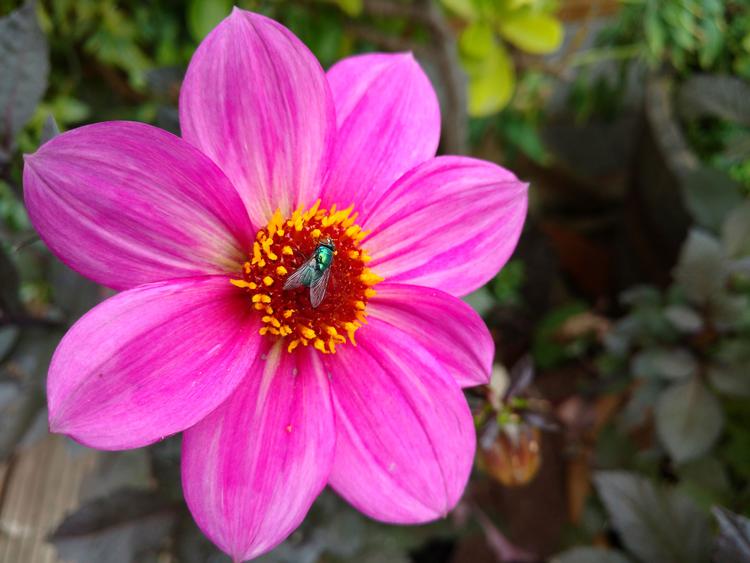 This is a 100 percent crop of the image so you can see the full amount of detail captured: 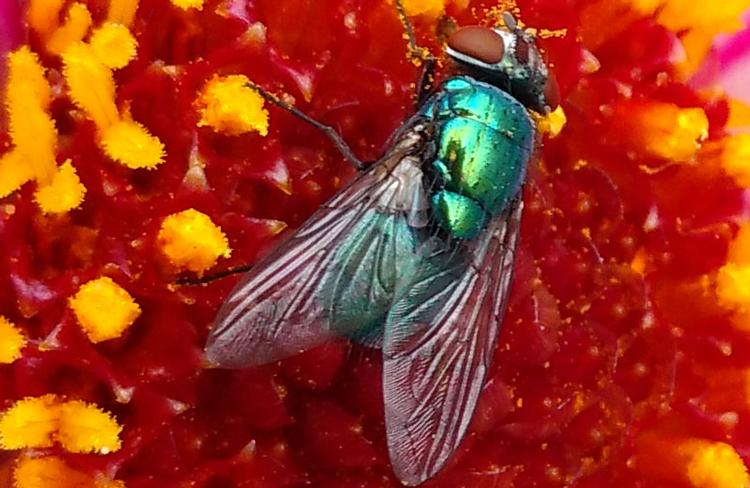 You can toggle a focus/exposure control which lets you tap to set the focus and exposure point, and dial the exposure up and down. There’s also night and panorama modes.

Frustratingly, the Play can only capture 1080p HD video, not the 4K video that’s supported by the Style (and OnePlus 2). It can shoot slow motion video, but only at 540p – not even in HD! You should also know that the Play doesn’t have optical stabilisation, while the OnePlus 2 does.

This makes video footage feel quite raw, but it’s sharp and colours are great. Sound quality is reasonable – overall you shouldn’t be disappointed, so long as you won’t miss the option to record in 4K.

The Moto X Play comes with Android 5.1.1 Lollipop installed, which is pretty much stock Android that Motorola has hardly touched. You will find Moto Assist, Moto Display and Moto Actions, but aside from that we’re pleased to see that the company has gone for a vanilla user experience that’s closer to what you’ll find on Google’s own Nexus devices.

An update to Marshmallow is on the way, and the Play should be receiving it soon.

Moto Display – for those unfamiliar – shows the time and notifications when you pick up the phone. On the old Moto X, this meant lighting up only a few pixels, but since IPS LCD displays use a backlight for the entire screen, Moto Display on the Moto X Play offers close to no power saving at all. It’s merely a handy way to check time and if you have anything important to look at without pressing the sleep/wake button.

Moto Assist is the same as before. It can read out text messages when you’re driving, and let you dictate a reply. You can set quiet hours when notifications can’t bother you, unless it’s really important. This also includes checking your calendar to find out when you’re in meetings, and switchin to silent mode automatically. You can record a custom phrase which you can say to put the Play into a hands-free mode and speak your requests.

Another handy feature is the double-twist movement which launches the camera: no faffing about with swiping the screen before you can take a photo.