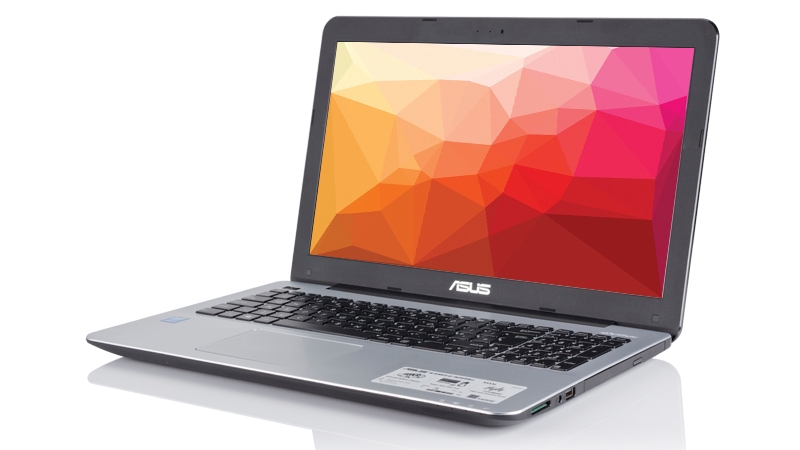 Asus has restricted build and component quality to fit the attractive £300 price point, but all the essentials work well together. The Haswell Intel chip means overall performance is better than any Celeron-based competition in the Asus X555LA.

The perfect all-round value laptop for work and play. Thay’s how Asus bills its X555LA, and for once we’re almost inclined to agree. This 15in budget laptop can be found for £349.99, and while suffering the common failings such as low-resolution display and slow Wi-Fi, it presents a better balance in overall performance. Also see: Best budget laptops.

Note: This laptop has been revised since we originally reviewed it in July 2015. It’s largely identical, but the current model has a 2GHz Intel Core i3-5005U processor with Intel HD Graphics 5500 and now costs £349.99 instead of £300 when we originally tested it. It’s still great value, though.

The Asus X555LA has a two-tone finish, featuring a dark lid back with fine circular patterning, a black plastic base and silver-painted plastic top deck. At a little over 2.1 kg in weight and 26 mm thick, it follows a similar template to the Acer Extensa, and similarly also offers a dual-layer DVD+/-RW writer with pop-out tray on the right side.

Two USB 3.0 ports, gigabit ethernet, and VGA analogue and HDMI digital video output on the left, are joined by one USB 2.0 on the right and a card slot able to accept SDXC cards. You can also use headphones and microphone from the Asus X555LA’s 3.5 mm combo headset jack.

A standard-issue tiled keyboard includes a numberpad, and its key action is firm and easy to type on. There is a little flex under the keyboard under typing pressure but not enough for concern. See all budget laptop reviews.

The Asus X555LA’s trackpad follows the same silver-coloured finish as the wrist-rest area, a large buttonless multi-touch type 103 x 73 mm for easy cursor control. Asus includes its branded Smart Gesture software to optionally allow two- and three-finger gestures. The pointer precision could be better but it works well enough to get around.

Like most budget Windows laptops the Asus X555LA’s display is a weak point, relatively low resolution at 1366 x 768 pixels across the 15.6in panel. Its colour is limited to just 61 percent sRGB and the low contrast ratio of 80:1 means images and text lack the definition we now expect from consumer technology such as smartphones and tablets. A gloss finish gives a better impression of clarity but suffers from annoying reflections in daylight conditions.

For wireless connectivity Asus fits the most basic single-stream 11n adaptor, along with the usual Bluetooth 4.0.

Asus offers the X555LA with various processors – our sample had a 1.9 GHz Core i3 from Intel’s 4th generation, lacking any Turbo boost but usefully including Hyper Threading Technology to provide pseudo-quad core capability.

Only 4GB of memory is included, this soldered to the motherboard, but a spare SO-DIMM slot is available through an easy-access trapdoor on the underside. The 1 TB hard disk and 37 Wh battery are not easily accessible, and in our tests the lithium-polymer battery let the Asus X555LA run for 5 hr 17 min in our video rundown test.

Overall speed was good for the category, scoring 2028 points in PCMark 8 Home, while raw processor and memory performance reached 1906 points in Geekbench 3 single-core, and 3981 points with four threads active.

Some light gaming may just be possible from the Asus X555LA – we averaged 26 fps in Batman with Low detail and native resolution, rising to 30 fps at 720p.