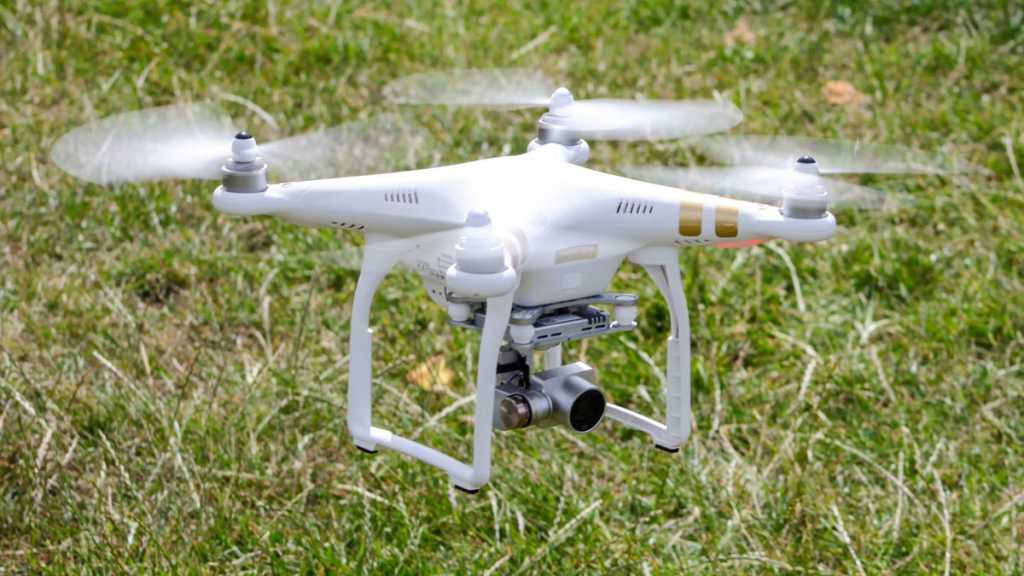 DJI has delivered on its bold claims: the Phantom 3 is by far the best consumer quadcopter we’ve seen. It’s stable and produces stunning video footage. Its range goes beyond what most consumers will need and the only extra requirement out of the box is a compatible iOS or Android device to use with the controller. Even beginners will be able to fly it, and there are good safety features to prevent the Phantom flying away, as well as landing when the battery is low. The Professional model is fairly expensive at over £1000 online, but those who don’t need 4K can save (and still be happy) with the Advanced model for under £800.

It may look the same as before, but DJI says it has rebuilt the Phantom 3 from the ground up to make aerial imaging as simple as smartphone photography. It doesn’t stop there, either, with the company claiming that this is the best consumer quadcopter that has ever existed, and offers the ultimate flying experience. See also: DJI Phantom 2 Vision+ review

Bold claims indeed, considering the increasing competition in the world of drones. So, let’s get the bad news out of the way first. The Phantom 3 does have a raft of new features but it does not have auto-follow, cannot orbit an object and won’t fold up and fit into your backpack. Nor can you throw it into a lake and watch it burst out of the water and into the air like a certain other drone you may have seen on YouTube.

Update 10 September: DJI has issued an update for the Phantom 3 range which adds auto-follow and orbit modes. This is great news for early adopters who might otherwise be wishing they’d waited and bought a 3DR Solo instead. There’s good news for P3 Advanced owners, too. The update brings 2.7K video recording to their birds – about time since the cheaper Phantom 3 Standard had this capability from its recent launch, while the Advanced model was limited to 1080p.

Spare batteries cost a whopping £124 from DJI, but you can buy compatible batteries for under £50, such as this one from Banggood.

The Phantom 3 is manufactured by the most popular consumer drone maker in the world. This is important because it means several things. First, you can get spares easily. Second, there’s an SDK which means developers can build new apps for the Phantom 3 which in turn means there will be even more features in the not-too-distant future.

Yet another benefit is a thriving thriving third-party market for things like carry cases  and other accessories – and means there’s often cheaper alternatives to official spares such as propellors.We don’t recommend straying from the official DJI batteries, though. It’s frustrating to have to pay a premium, but there are no guarantees aftermarket batteries will work.

There are three models of the Phantom 3: Standard, Advanced and Professional. We tested the Professional, which you can buy from FirstPersonView but much of this review applies to the £899 Advanced version as well. The only difference between the two is the

The most obvious upgrade is the camera. The Professional version gets a 4K camera with a 94 degree field of view. It has a larger sensor with more dynamic range as before and it’s mounted on a three-axis gimbal as you’d expect. For the uninitiated, this means it delivers amazingly stable video as if the camera were mounted on a tripod in the sky. And if you’re gentle with the controls, you should never see the propellers in the footage. 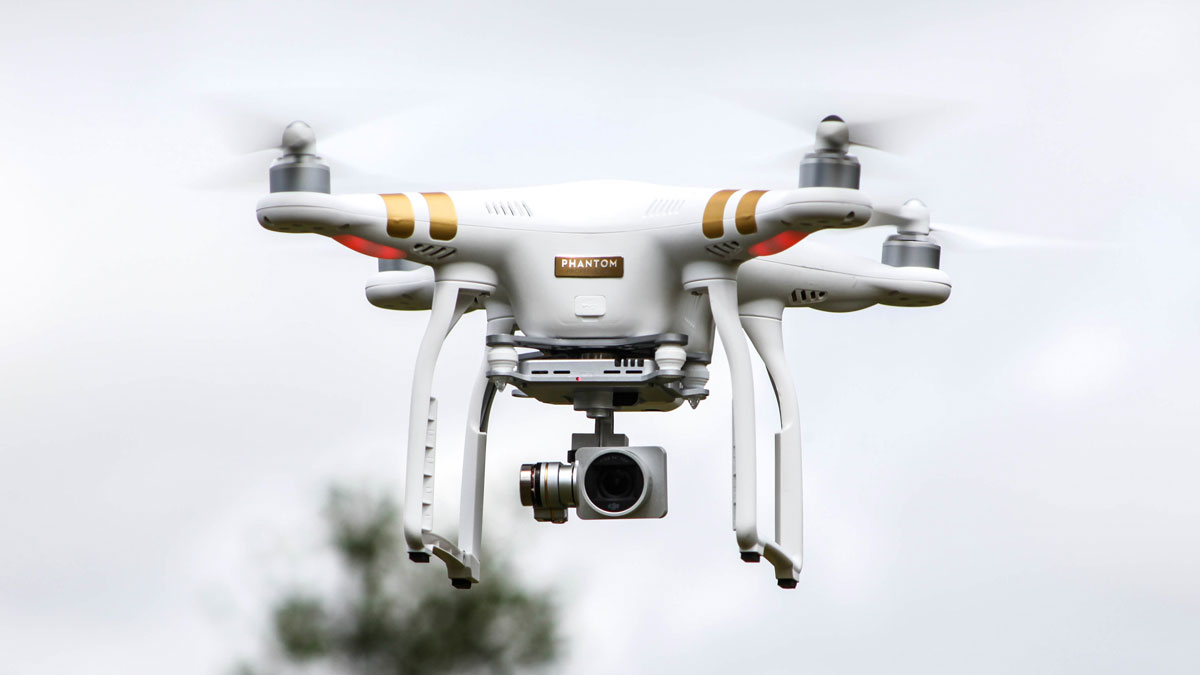 If you go for a Phantom 3 Advanced, you’ll get a camera capable of shooting 2.7K at 30fps which is higher resolution than the Phantom 2 Vision’s. It’s limited to 40Mbps – 20 less than the Pro. It has a 94-degree FOV like the Professional and also shoots 1080p at 30 or 60fps. The sensor is also different to the Phantom 2 Vision and DJI says it offers less noise and better clarity.

Both cameras – Advanced and Professional – can also shoot 12Mp still photos in JPEG and DNG RAW, just as with the Phantom 2.

The Standard model (separate review to follow soon) has a Panasonic sensor instead of the Sony Exmor sensor in the Pro and Advanced, but can also record 2.7K video (a resolution of 2704×1520).

The way you control the camera has been improved over the Phantom 2 since you can now do a lot more from the transmitter. You can change aperture, take photos, rotate the gimbal and more without taking your hands off the controller. 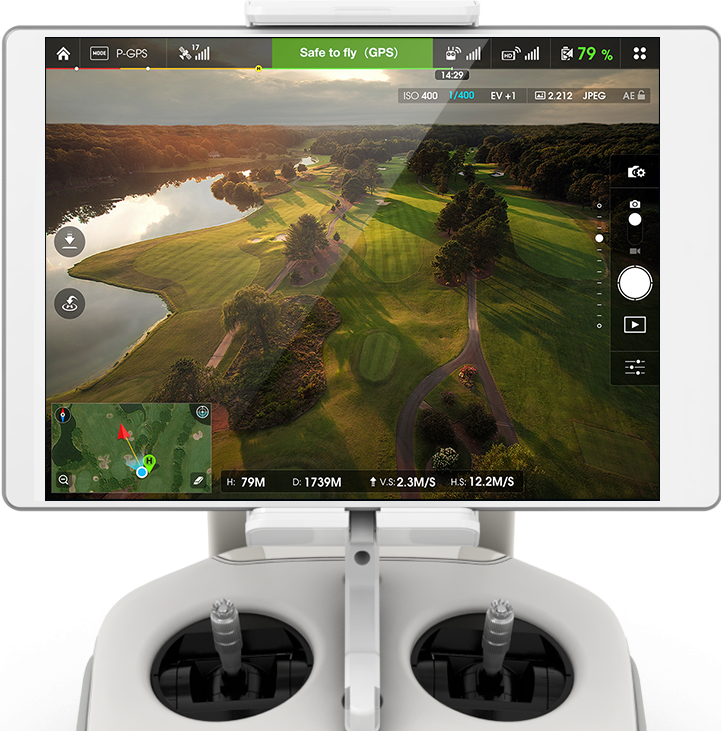 Lightbridge is built into the Phantom and controller so you get a 720p image from 1.6km away, as long as there are no obstructions. The transmitter has been redesigned and features a flip-up clamp which will take phones and tablets with up to 10in screens. That means you can use your iPhone 5s or your iPad Air.

Cleverly, you now plug your device into the controller’s USB port so there’s no need to connect to the Phantom’s Wi-Fi, and there’s one less wireless connection to worry about. 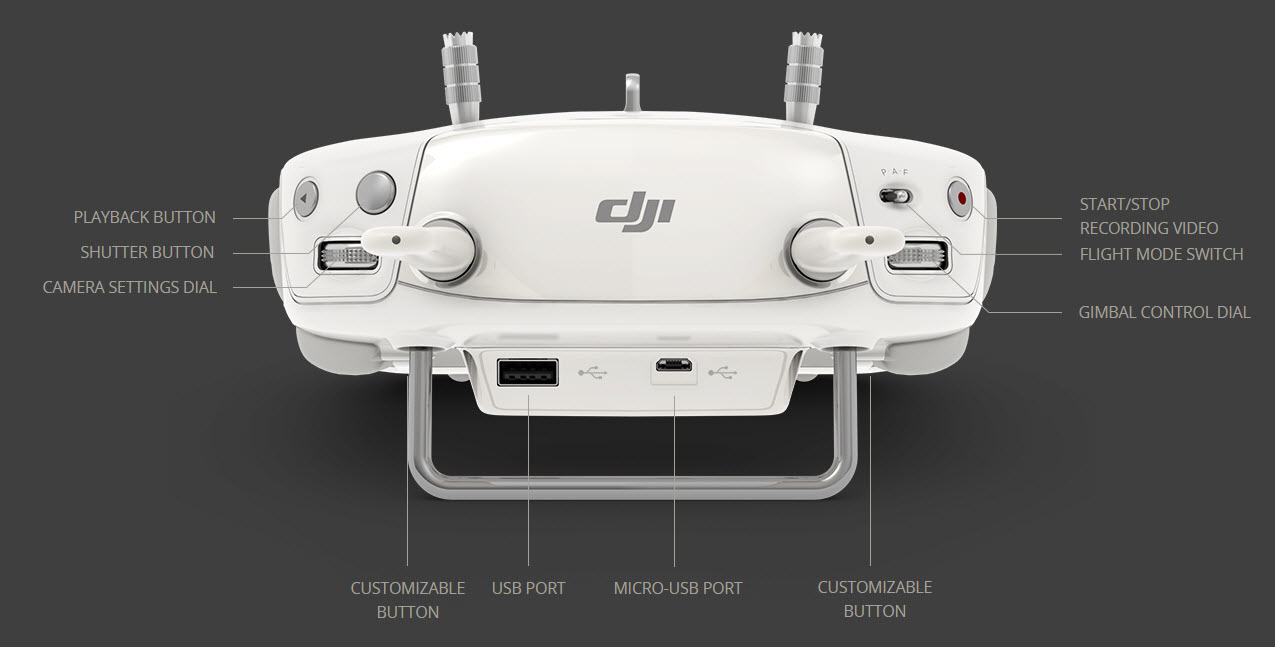 DJI says the motors have been upgraded so they accelerate and decelerate more quickly. It’s hard to notice much difference between this and the Phantom 2, but unlike some cheaper quadcopters, the Phantom 3 instils confidence in the way it flies.

It’s ultra-stable in the air, even in reasonably windy conditions. It’s specified to remain stable even in 25mph gusts.

If you’re flying low to the ground, new ultrasonic and ‘visual’ sensors (from the Inspire 1) enable the P3 to hover just inches off the floor. This means you can fly it indoors without needing a GPS signal. We wouldn’t be confident to do this in small spaces, though, as it’s not an obstacle avoidance system. The sensors do make it more reliable when taking off and landing, and the app has buttons for auto take-off and landing if you don’t fancy using the sticks to do it manually. 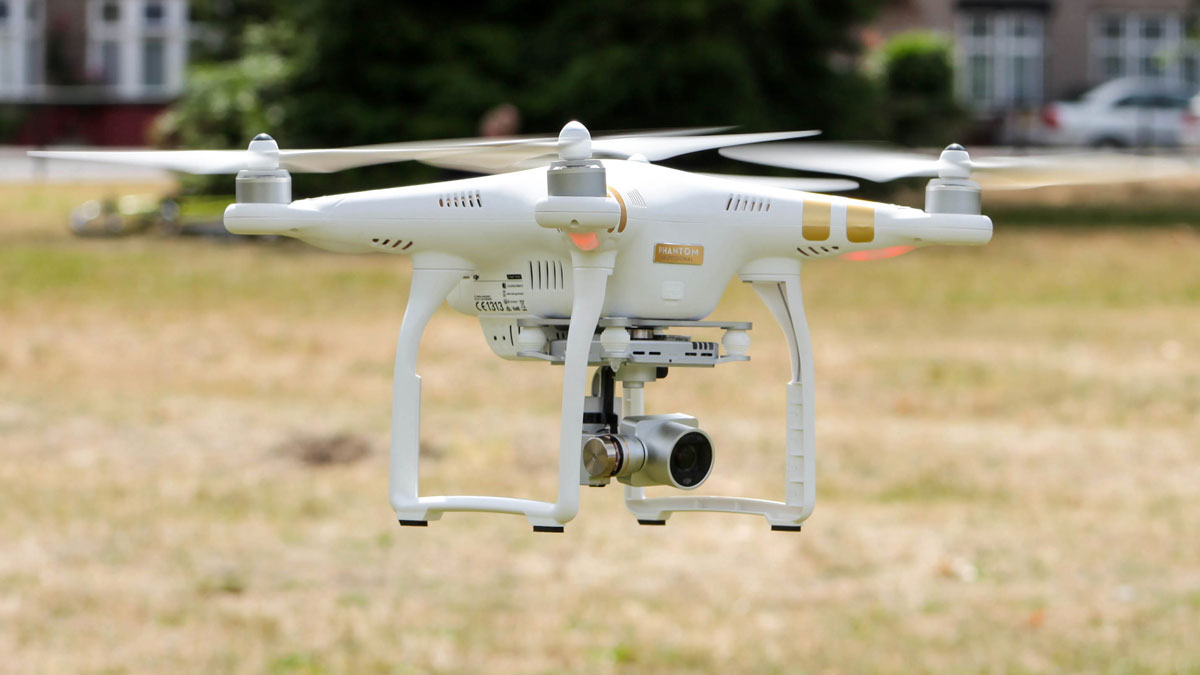 The P3 uses the same Pilot app as the Inspire 1 and it defaults to beginner mode. This limits altitude to 30m and sets up a geofence to prevent you from flying the drone too far away from your position.

There’s the same return-to-home function as before. The quad always knows how far it is from the controller and how much power is needed to get back so will automatically initiate the return process when the battery runs down to the critical point. It will also automatically land when it hits 10 percent remaining – preferable to cutting out mid-air when the battery is completely depleted (you may have seen another YouTube video covering that eventuality).

Battery life is claimed to be 23 minutes with the new battery, but we found it was a few minutes less than that. It could be that you’ll get the full 23 if there’s no wind at all, but more than likely you’ll want to order a spare battery. As it’s a different voltage, you can’t use any batteries from the Phantom 2.

The app’s interface is simpler than the interface you get with the Inspire 1. It still gives you plenty of control, though. You can pick between various resolutions and frame rates, as well as white balance, shutter speed, ISO and more. For 4K, it will shoot at 24-, 25- and 30fps at the usual 16:9 3840×2160 resolution. But it can also record 4096×2160 if you prefer. 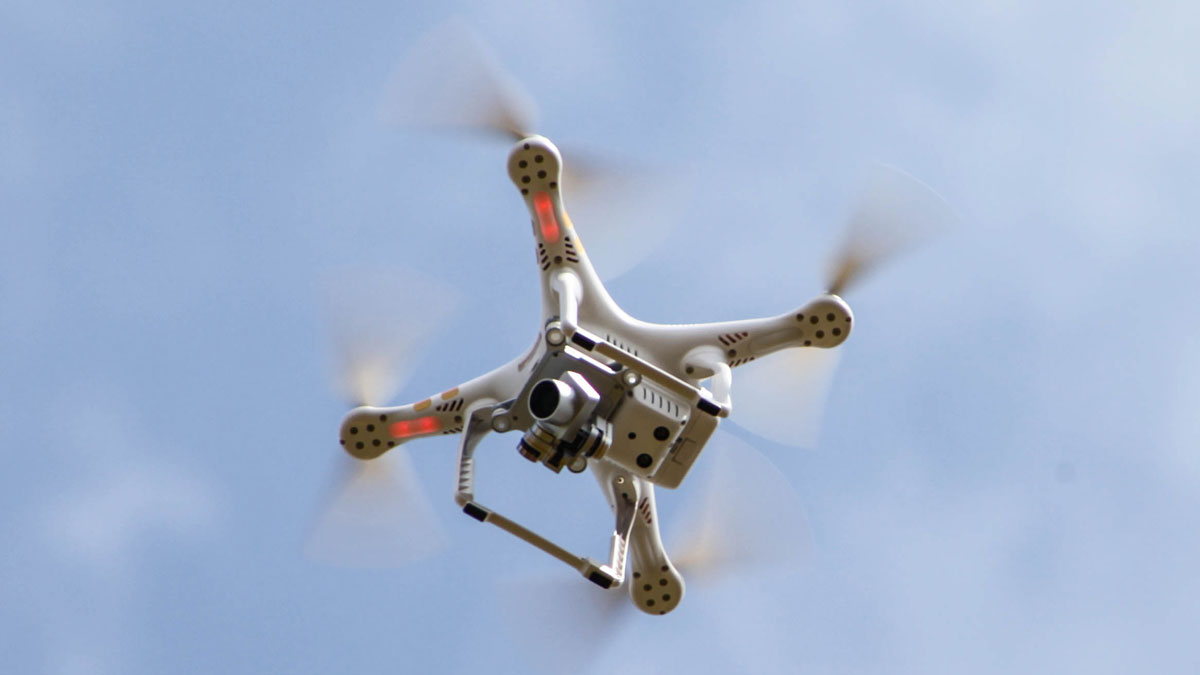 For higher framerates up to 60fps, there’s also a choice of 1080p and 720p. Talking of 720p, the app lets you stream footage at this resolution straight to YouTube. Since the Phantom records video but not audio, you can add a soundtrack via your mobile device’s microphone – ideal for commentary of what the audience is seeing. The quality isn’t a patch on the excellent 4K footage (which can be recorded to the drone’s SD card simultaneously) but it’s pretty good. The narrower 94-degree lens means there’s much less image distortion than on the Phantom 2 Vision+ but it’s not completely absent. Most people are unlikely to notice it, though.

Although the Phantom 3 Professional can record at bitrates of up to 60Mb/s don’t expect the level of quality you’d get from a CSC such as the Panasonic GH4. 4K footage is good, though, and certainly the best we’ve seen from any consumer drone.

Via the app you can view videos stored on the quad’s microSD card and download short clips to use in the Director part of the app. Here you can quickly edit videos (highlights are chosen automatically) and music is automatically added. You can then upload them to YouTube, Facebook and Instagram. For serious video work, you’ll want to copy the original files off the card and import them into a 4K video editor such as Final Cut or Adobe Premiere, of course. 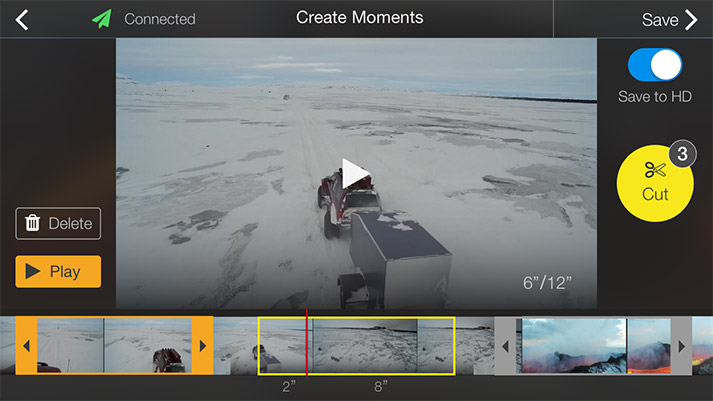