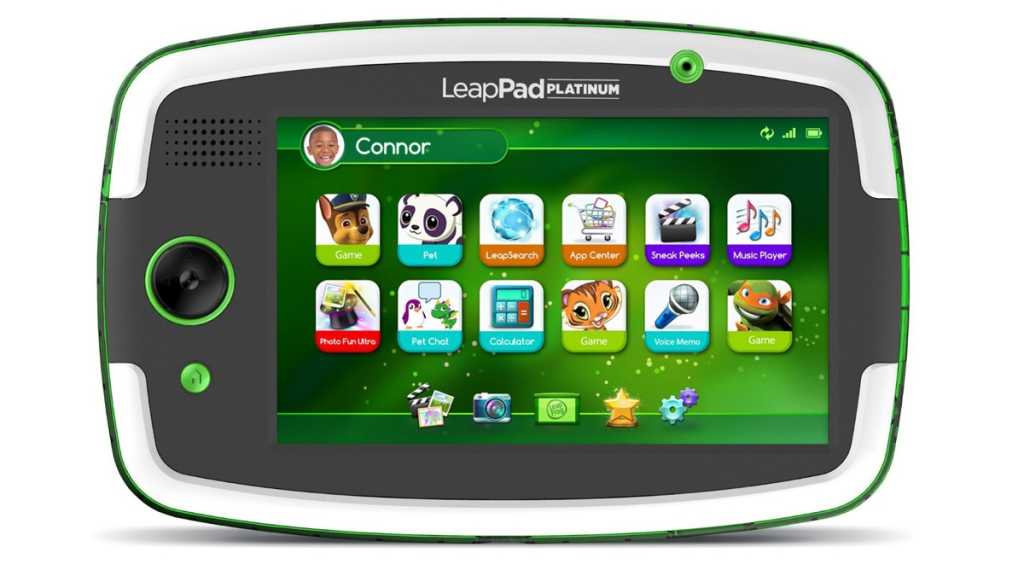 If you’re after a tablet for your kids – or grandkids – the LeapPad Platinum is a decent choice. It’s completely locked down, designed specifically for kids and therefore will withstand the odd knock or drop. Kids will love the pre-loaded content, which is generally good quality, but they’ll be asking for more apps before long, and the choice is much more limited than on an Android tablet or iPad. The best alternative is Amazon’s Fire HD 6 which is a better-specified tablet but doesn’t have a stylus or case. If you can stretch to £119.99, the Kids Edition of the HD 6 comes with a foam bumper case, a “worry-free” guarantee and a year’s subscription to Fire for Kids Unlimited, making it a good deal.

LeapFrog is one of the best-known brands when it comes to kids tablets. The Platinum is – as the name suggests – the top-of-the-range model. In looks and how it works, it’s similar to the older models.

It has a built-in stylus, front and rear cameras, a speaker, headphone socket and Wi-Fi (with a kid-safe web browser).

It comes with several pre-loaded apps and some demos, and you can buy more apps from the LeapFrog app store.

It’s possible to create multiple user profiles so it can be shared between siblings, and games offer age-appropriate material and questions.

While there’s no getting away from the fact that the content is American, the UK school system is used for choosing the level in games and apps. It’s mostly educational, too, and unlike some kids games, there’s a chance the LeapPad will actually teach kids a thing or two. 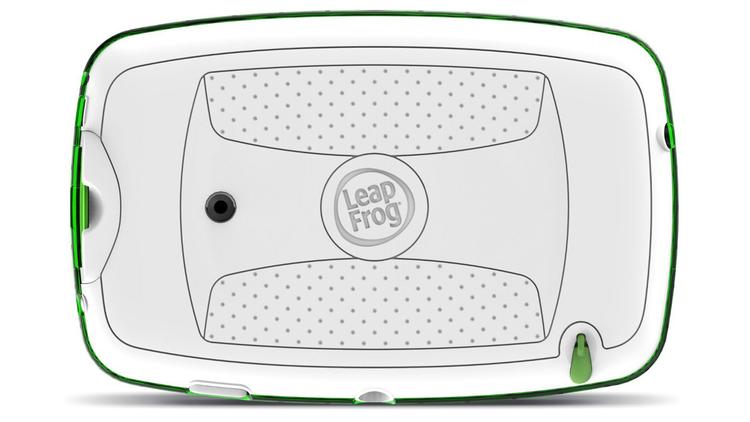 The Platinum costs £79.99 from Amazon and comes in either pink or green.

You get the PetPadParty game included (very similar to PetPlayWorld on the LeapTV), along with a clock app (which reads out the time to help kids learn to read an analogue clock), a calculator, a calendar, voice memo and a camera app which can add fun effects to photos.

Through the app store you’ll find an extra 800 or so apps ranging from £2 to £20. There are also Imagicards games. These are around £9.99 each (such as this Paw Patrol set) and come with a pack of cards which are used in the game.

As it’s designed for kids from 3-9 (we think a two year old would get enough out of it, but beyond seven kids will probably find it too childish) the LeapPad Platinum has a tough case and a “shatter-safe” screen.

The 7in screen has a resolution of 1024×600 which is higher than other LeapPad tablets, but by no means high resolution by today’s standards. It’s bright enough and colourful, with good viewing angles.

There’s a volume rocker on the bottom edge and a card slot for game cartridges on the right.

You can charge the tablet using the bundled charger or use the included USB cable to charge it from your computer or any USB charger (which means it can also be charged in a car).

The battery lasts around five fours which isn’t amazing, but as the tablet turns off completely when you press the power button or if you leave it idle for too long, power isn’t wasted. It also means the Platinum keeps its charge even if you don’t use it for a few days. We found it was enough for a good few sessions before it needed a recharge. 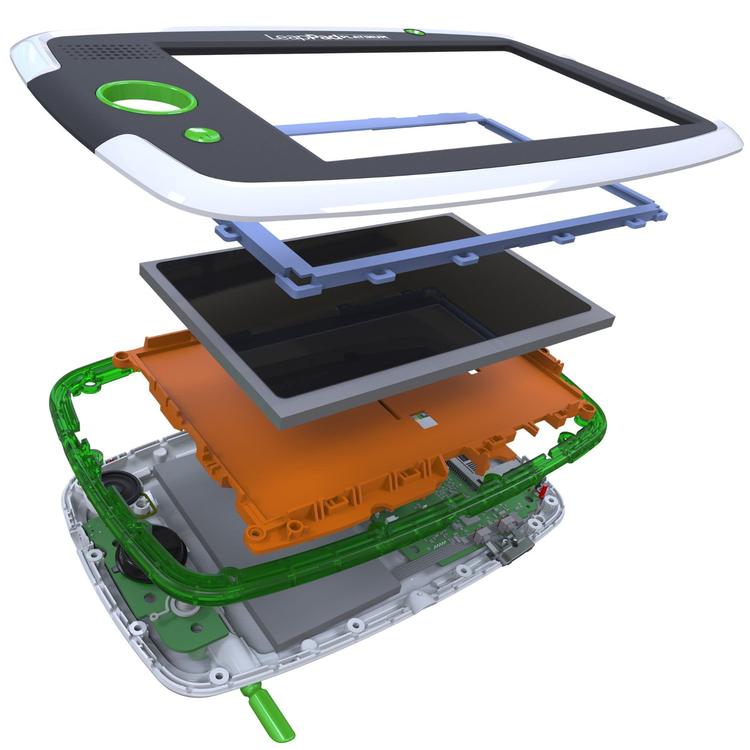 To the left of the screen is a direction pad which can be used to navigate around in some apps, and pressing left or right moves between home screens.

There’s enough pre-installed for hours of fun. Our three-year-old tester loved PetPadParty, as well as the included music in the Music app.

In PetPadParty, a pre-schooler will have to select numbers and letters when directed to unlock mini-games which themselves help with dexterity and are generally just good fun. You can create and name pets, give them toys, feed them, wash them and exercise them.

There’s also PetChat which is an instant messaging app which works with other LeapPad tablets, but isn’t any use on its own.

Six demos come with the tablet, although some require extra files downloading before you can play them. The Imagicard demo is one of them. This gives you a flavour of what you’ll get for £19.99 if you buy one of the full sets.

It’s not quite the augmented reality experience we were expecting, though. When you focus the camera on a card, the tablet recognises it and takes a photo and the letter or character springs into life on top of the photo. Because it’s a photo, you can’t move the tablet around and see the character run around on your knees or on the floor as you can with certain iOS and Android apps.

The games let you take photos with characters by using a combination of the cards and the front camera, but the results are fairly uninspiring.

The first time you go to the app store you will be prompted to download a free app (and create a LeapFrog account if you skipped that step during setup). There’s a choice of three for each age group, and you’re allowed one. For the 4-5 Nursery age group we were offered spelling, maths or a colouring game.

It’s a shame that no colouring or sketching app is included by default. There’s a Notes app, but it only lets you type using the keyboard – not much use if your child is three.

You can filter by age group as well as by price, character, app category or skillset. Sadly there are no free apps. It’s even more of a walled garden than an iPad: there are no other app stores to browse, and although there are Disney and Nickelodeon licences, you’re not going to find Toca Boca and many other popular kids games here.

As a parent you can set a limit on how long the tablet can be used before a ‘rest’ period, the length of which you can also set.

It’s a bit annoying that the setup and parental interface is portrait, while the child interface and games are generally landscape. A minor issue, granted.

For the most part, the Platinum is speedy enough, but there can be delays when returning to the home screen and launching apps. Kids can often be confused when there’s a tutorial section of an app as it stops being interactive until the tutorial is over, so it’s worth supervising them until they’ve played it for a bit.

Almost every instruction is spoken so kids don’t need to be able to read to use most aspects of apps. 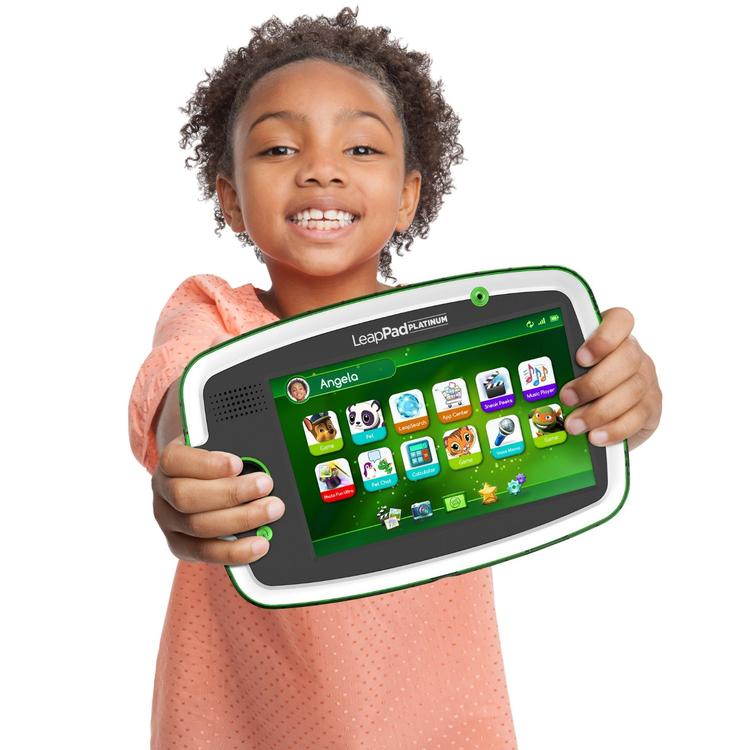 It almost goes without saying that the 2Mp cameras aren’t up to much. Although kids will have fun using them to take photos and videos, their quality is dismal by modern standards. It’s a sad fact that every kid’s tablet we’ve tested has poor cameras, and the VGA video clips from the Platinum aren’t really good enough for sharing.