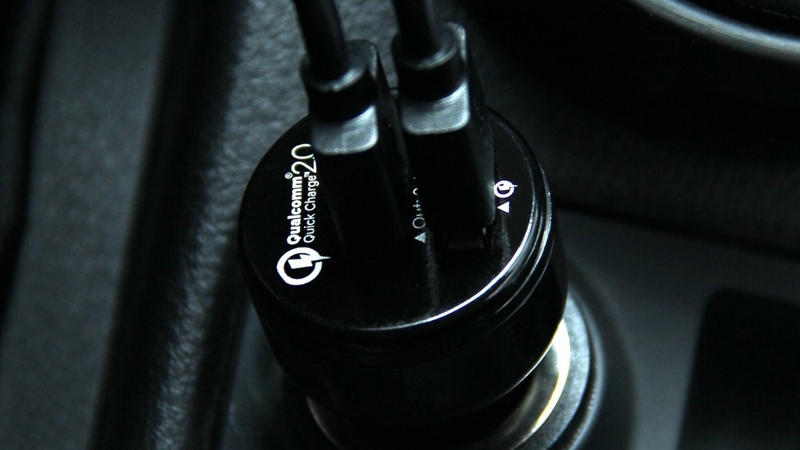 You might say it’s just a car charger, but it really isn’t. Our phones are an essential part of our increasingly digital lives, yet few flagships are able to last a full day away from the mains with medium- to heavy usage. We’ve previously relied on a power bank, which we might carry in our pocket or bag, but must remember to recharge whenever it runs out of juice; the Tronsmart USB Rapid Car Charger is the ultimate power bank for the car. If you have a Samsung Galaxy S6, HTC One M9, Sony Xperia Z3+, LG G4 or other flagship device, you need one of these.

Kicking things off on a good foot, the Tronsmart is inexpensive. Our sample came from Geekbuying, which charges just £11.17 with free delivery. If you would rather buy within the UK you’ll have to pay a little more, with the Tronsmart available on Amazon UK for £11.99 at the time of writing. The only rival in-car charger we’ve seen to come close to the Tronsmart on value and functionality is the £11.99 Aukey charger, which also costs £11.99 from Amazon UK. The two appear to be almost identical, although the Aukey has a slightly more garish orange and green colour coding for its outputs, while this Tronsmart has a uses grey and blue. Also see: Grey-market tech buying advice.

The Tronsmart feels well built. It’s no larger than it needs to be, poking out the top of our cigarette lighter port by no more than an inch, and with a glossy black finish that looked nice against the black interior of our car. The supplied USB- to Micro-USB cable is also a handy length at 1m, meaning it could easily reach from the Tronsmart to a windscreen-mounted phone.

The Tronsmart Rapid Car Charger comes with dual-USB outputs that offer fast-charging to any phone, tablet or other device that charges over USB, and with 30W of available power it can simultaneously support both outputs at full-speed. Also see:  How to improve smartphone battery life.

The first of these two USB outputs is specified at 12W (5V, 2.4A), and uses VoltIQ technology to cleverly recognise your device and deliver just the right amount of power for optimal charging. The second is more interesting, a Qualcomm-certifed Quick Charge 2.0 output, which runs at 18W (12V, 1.5A). For devices that support it, charging time can be reduced by a staggering 75 percent.

Qualcomm Quick Charge 2.0 is a next-gen fast-charging technology for phones and tablets running certain Snapdragon processors. In Qualcomm’s own lab tests, it found a Quick Charge 2.0-enabled device with a 3300mAh battery was able to reach 60 percent capacity in 30 minutes; using a standard 5W phone charger just 12 percent charge was achieved in the same amount of time. Also see:  How to charge your phone or tablet faster.

We tried the Tronsmart with our Samsung Galaxy S6. Although it runs one of Samsung’s own Exynos- rather than Snapdragon processors, it also supports Qualcomm Quick Charge 2.0 alongside Samsung’s Adaptive fast-charging feature. In a short 10-minute car journey our S6 gained a 20 percent charge – and the Tronsmart didn’t get even slightly hot under the collar in enabling that impressive feat (our S6 warmed up a little, but that’s to be expected, assures Qualcomm).

Our experience with in-car USB chargers in the past hasn’t been particularly favourable. They keep your phone going so you can use it as a satnav, but unless you’re going on a particularly long journey (or get stuck in a nasty jam) they never seem to have gained much battery when it’s time to unplug them and go off on foot. Qualcomm Quick Charge 2.0-supported car chargers change all that, and you could potentially get enough power to keep your phone going all day during your commute. That’s incredibly useful.