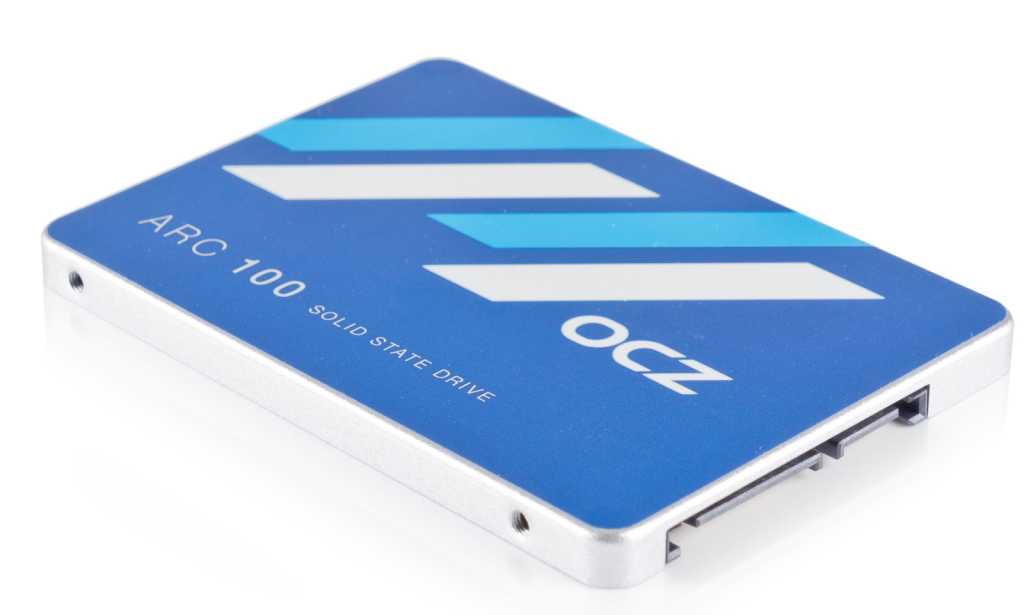 This may be only OCZ’s budget drive but it offers great performance with plenty of all-important support to provide peace of mind to anyone concerned about moving to solid-state storage. With its attractive warranty terms and great performance for the price it’s easy to recommend.

The OCZ company appeared early in the history of SSDs as a specialist in performance drives, and still makes high-specification drives under its new owners Toshiba. But the ARC 100 is unashamedly a value-focused solid-state drive, bringing enough of the virtues of PC flash storage to woo potential disk upgraders, at a most attractive price.

We were sent the 240 GB version of the ARC 100 to review, which can at time of writing be found for just £69 ( currently £67 from Amazon). Even in this smaller capacity that represents a price of just 28.8p per gigabyte, making it the best value of any SSD we have tested this year. You can also find the ARC 100 in 120 and 480 GB sizes. See our group test:  What’s the best SSD?

Before going bankrupt in 2013, OCZ had a poor reputation in some quarters for dying and defective SSDs. But since Toshiba bought the company in 2014 it has been groomed into a professional, consumer-focused company with an impressive after-sales policy.

OCZ calls this the ShieldPlus warranty, extending for three years for this model. In the event of a fault, there’s no need for your receipt, just quote the serial number, and if the support team deem the drive as defective you’ll get an advance replacement SSD sent out with free shipping, before you need to return your dud unit. See our group test:  What’s the best SSD?

While most SSDs are using controllers made by Marvell, with SandForce still popular with some brands, OCZ is pressing into service the expertise it bought with the acquisition of Indilinx. Variants of the Indilinx Barefoot 3 are used in all its SATA-based drives, and here it is backed with 512 MB of DDR3 DRAM as cache; although strangely OCZ does not wish to reveal this latter specification.

This controller is designed to deliver good sustained performance in long-term use, and does not suffer from slowdowns when presented with incompressible data. For flash-memory silicon, OCZ is using its parent company’s toggle NAND with a 19 nm process size.

OCZ offers its own software for Windows and Linux with which to update and optimise the drive, SSD Guru. For Mac users there’s a bootable ISO for download which can be written to an optical disc or USB drive.

We were not expecting the fastest speeds from this budget drive, so were pleasantly surprised by some of the results that placed the ARC 100 ahead of more expensive products. In the simple sequential test, the OCZ did prove to be the slowest, the only drive not to peek above the 500 MB/s parapet, although this should be of little concern on daily use. Sequential reads reached 489 MB/s and writes 447 MB/s.

As promised by OCZ, the Indilinx Barefoot controller does not use any on-the-fly compression tricks to accelerate speed, and CrystalDiskMark reported practically the same speeds for random and compressible data: to wit, 426/427 MB/s for reads, and 431/432 MB/s for sequential writes.

Small file performance was very good, with 4 kB random reads at 27 MB/s – a little lower than most but only by a megabyte or three per second – while 4 kB random writes were actually the highest on test at 127 MB/s. That’s a clean-drive result which will likely drop once the drive reaches steady-state level, but still impressive.