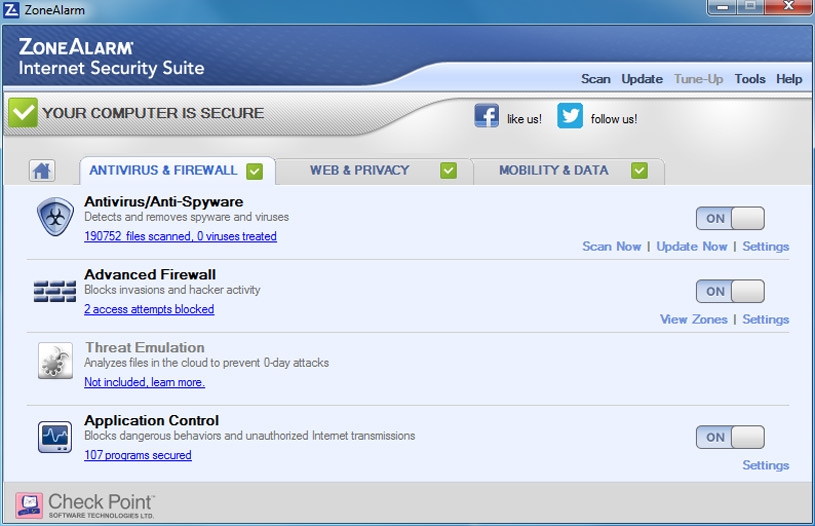 ZoneAlarm Internet Security Suite 2015 is very sound anti-malware software. Although the scan rate is low, since the impact on the system is low, this probably won’t matter. The range of facilities offered in the suite includes most of the things you’d want, though we’d like to see the Privacy bar in a version that will work with Chrome.

ZoneAlarm has a long heritage as a supplier of internet security software and the latest version of its Internet Security Suite includes a lot of useful components. As well as antivirus, anti-spam and a two-way firewall, there’s browser protection, anti-keylogging, private browsing, parental control and online backup.

The interface is pretty old-school, with simple panels and icons, but is none the worse for that; at least you can find you way around easily.

Most of the facilities in the software require only switches to turn them on or off, though some have to be separately installed or activated. The program can be left largely to its own devices, giving good protection straight out of the box.

A Privacy Toolbar, which prevents online tracking and throws up any privacy risks in Facebook, can be added to Internet Explorer, prior to version 10, and to Firefox, but not currently to Chrome. This is an odd restriction, given that over 50 percent of all browsing is done with Google’s browser.

There’s 5GB of online storage supplied with the suite, which is reasonably unusual in a mid-range package. You have to share it among your three licences, so it’s still not a lot per PC, but you can subscribe for more.

The three elements missing from this suite, which are available in the top-of-the-range Extreme Security product, are threat emulation, for spotting threats hidden in incoming emails, PC Tune-up and laptop location software as an anti-theft measure. There’s also no Android protection included, though this is available as a separate purchase, called ZoneAlarm Capsule.

Under scan-speed tests, ZoneAlarm ISS 2015 took 1 hour, 6 minutes to scan our 50GB basket of files, examining 8,738 files, the fewest of any IS suite we’ve reviewed. This also gave it the slowest slow scan rate we’ve recorded, at just 2.2 files/s, around half that of ZoneAlarm Extreme Security 2013.

When we repeated the test, to see how intelligent the scanner is at not retesting unaltered files, it took 21min 12s to check the same number. This compares with the 19 seconds needed by the 2013 product to accomplish the same task. We have to ask what has happened in the interim to make the scanner so much slower than before.

Measuring the overhead of a scan, when copying a 1GB file between disks, gave just a 2 percent slowdown, a very minor hit. AV-Test ( www.av-test.org) results for ZoneAlarm reflect this small performance drop, with a total of 1s impact on a variety of tasks, against an industry average of twice that. This gave it a Performance score of 5.5/6.0

In the Protection category, which looks at detection of both widespread malware and zero-day attacks, it scored close to 100 percent, dropping just one percent in one month in the zero-day tests. This added 6.0/6.0 to its cumulative score.

The final test, Usability, looks for false detections/blocks of legitimate programs and here ZoneAlarm had a completely clean slate, with not a single false positive. This gave it another perfect 6.0/6.0, giving an overall score of a very strong 17.5/18.0.

You can buy the ZoneAlarm Internet Security Suite 2015 from Amazon for £39.