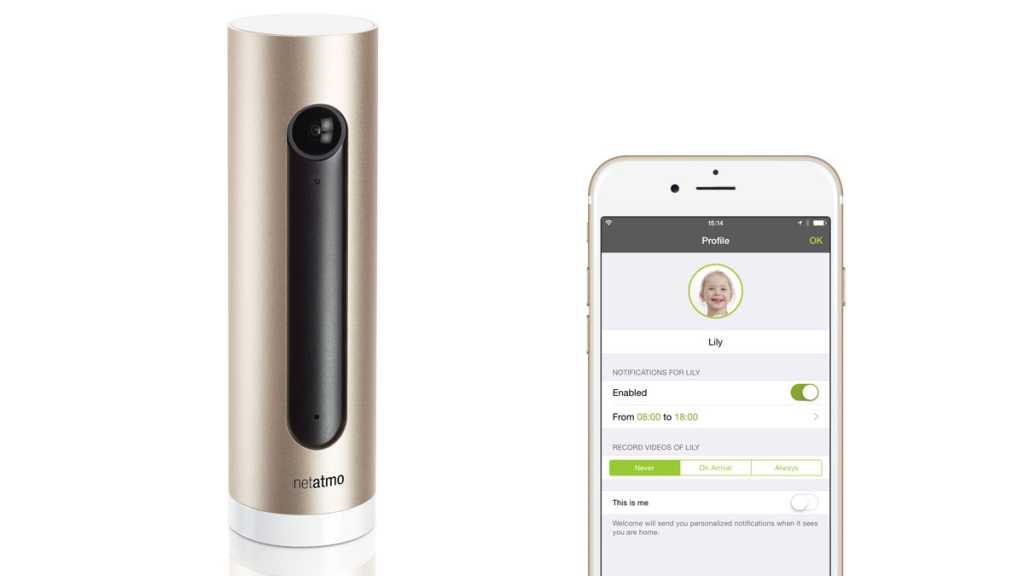 At £199, the Welcome is relatively expensive for an indoor camera. But unlike the new Nest Cam IQ, it doesn’t require a subscription. The facial recognition isn’t 100 percent accurate (neither is the IQ’s) but at least the app lets you configure exactly when you get notifications and you can reassure family members that it won’t record clips of them if they don’t want it to. With added pet detection, and the fact you can find it cheaper from John Lewis, it’s pretty good overall.

There are lots of security cameras aimed at home users, but the Netatmo Welcome was the first that could recognise faces. There’s now the Nest Cam IQ, but that costs a lot more and requires you to pay a subscription to enable most of the features.

The Netatmo Welcome does most of what the IQ can do, and alert you when someone arrives home as well as when it detects a stranger’s face.

In the latest software update which rolls out from 1 August 2017, pet detection has been added and can alert you when your cat or dog walks in front of the camera.

Unlike some security cameras, you can choose to get alerts only when you want them. If you want the reassurance of knowing when the kids have arrived home from school, college or somewhere else, Welcome can do it. If you only want to know when they’ve brought ‘guests’ home, it can do that too.

We’ve also rounded up a selection of the best security cameras.

Since it looks unlike any other home security camera, it won’t even register as a camera to most people. So the Welcome gets off to a good start as far as discretion is concerned.

The camera shares its design with the Urban Weather Station and uses the aluminium case as a heatsink. It can get very hot, but Netatmo tells us it’s normal and well within the acceptable limits for consumer products.

It comes only in gold and it’s a shame there’s no choice of other colours.

It’s worth pointing out that there’s no integration with the Urban Weather Station nor Netatmo’s Thermostat so even if you own all of them, you’ll still have to have three separate apps.

However, it does use the same app (Security) as Netatmo’s outdoor camera, Presence.

As with other internet cameras, you can watch a live video feed on your phone or tablet from anywhere and also review recorded video clips.

Home security cameras are so much easier to set up and use these days. Netatmo’s Welcome camera is one of the easiest. You plug it in, turn it upside down until a blue light glows and then pair it in the free app (currently only iOS and Android). Note that it requires at least iOS 8.0, so refuseniks running iOS 7 will have to upgrade or look elsewhere.

From there you select your Wi-Fi network, enter the password and it’s then online and accessible remotely.

You’ll need to create a profile for each person who lives in the home and also do a fair bit of work over the next week or so as Welcome learns their faces. It needs to see each person’s face at different angles and in different lighting conditions (day and night) in order to be able to recognise them. 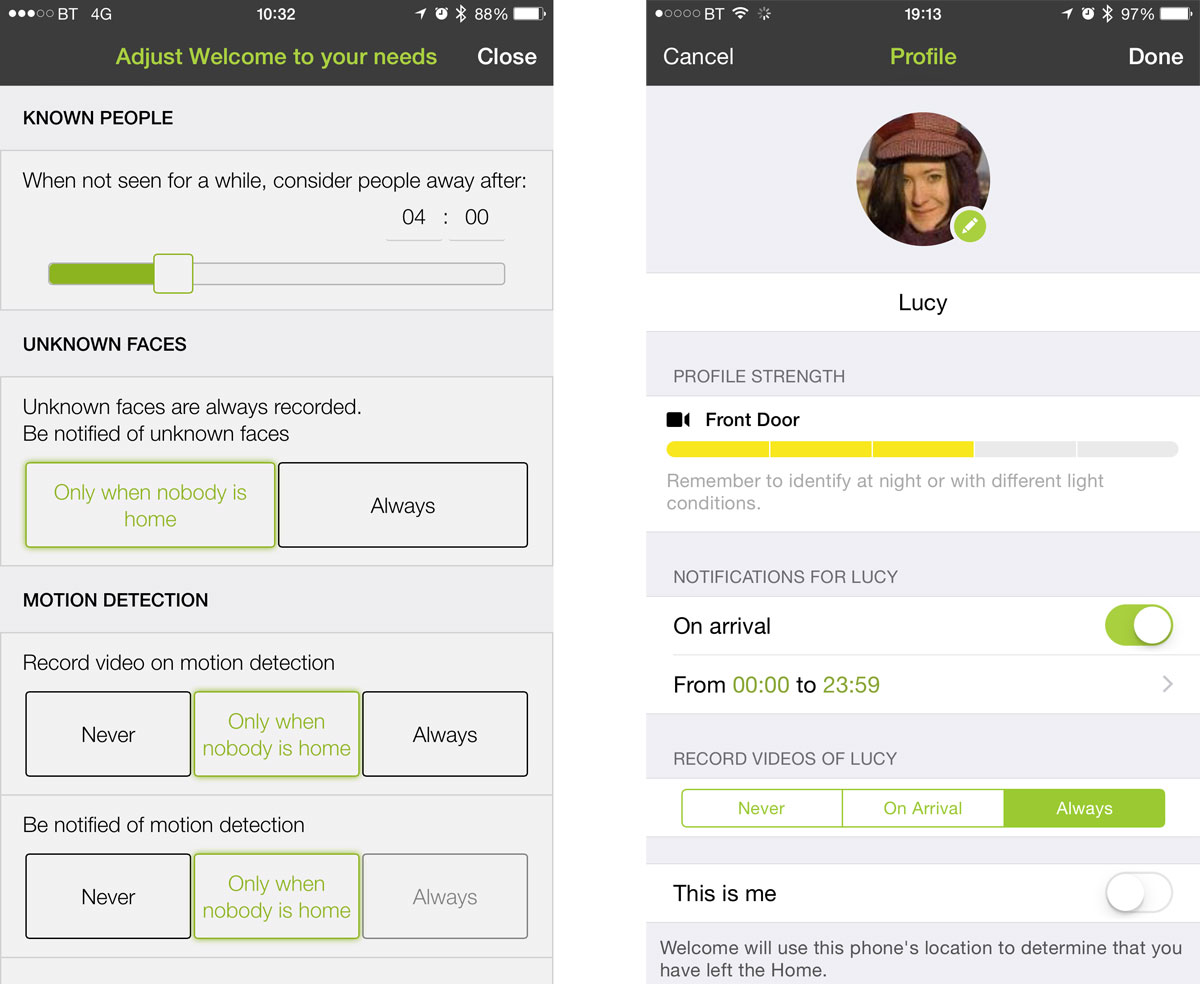 Depending on how frequently people come and go from the house you might find yourself dealing with dozens of faces which have to be manually assigned to profiles. There’s no way to select multiple images and assign them to a profile, although sometimes the app will offer up a selection when it thinks it has recognised someone and you can quickly tap all the correct ones.

Ideally the camera needs to be placed near the main entrance of your home, but not facing out of a window. For those – like me – with no mains sockets near their front door, this will be quite a problem.

We tested with the iOS app and found it well designed and easy to use. The home screen tells you who’s home and there’s a live (with a few seconds’ delay) feed at the bottom. Swipe right and you can see a summary of who’s away from home.

There is a web app for those without a supported mobile device, but it doesn’t have all of the mobile app’s features. Currently you can watch the live video and recorded clips, set general options and see who’s home or away, but you can edit users’ profiles or assign unidentified faces to particular profiles.

For each face you’ll see the assigned profile photo of each recognised person and a question mark over faces not recognised. A long tap on an unknown face gives you three options: identify, forget or ‘not a face’ for times when it gets it wrong.

A short tap on any face takes you to the most recent recording containing that face. For known faces, recordings will be available only if the system is set to record clips for that person. 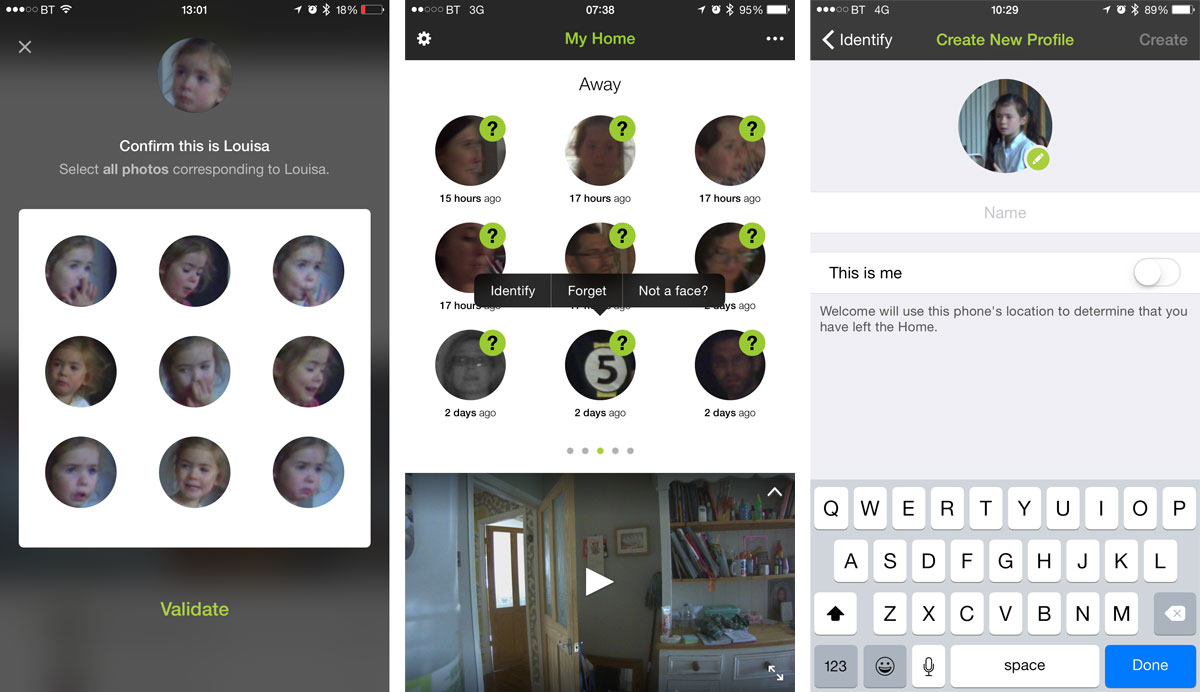 This is one of the privacy features: you can configure the camera to record exactly when you want it to. For example, you can choose to record a clip of a known person only on arrival as opposed to always or never.  You can also set the times between which you’ll get notifications for each person’s arrival: the app will still notify you that someone has been seen, even if it doesn’t record a clip.

The general settings let you choose whether to always record clips of unknown faces or only when nobody is home. The same goes for motion detection alerts.

Video is recorded locally to the bundled 4GB microSD card, but a photo is uploaded to the cloud to ensure you have a record of the unknown (or known) face in the event that someone pinches the camera itself.

Video quality is respectable with good resolution – it’s a full HD sensor – and accurate colours. Night vision is good enough, but as with videos recorded in good light, the ability to recognise an unknown face depends on how quickly the person moved past the camera, how close they were and the angle.

The quality you’ll see on your phone is much lower of course, but offers enough detail to see (and hear) what’s going on. Depending on the speed of your internet connection the delay in watching the live feed can be anywhere from a couple of seconds up to around 15 seconds.

Recognition accuracy is far from perfect. Even after a couple of weeks, with all profiles showing as complete in the app – meaning the camera has captured everyone’s face in enough different ways – there were still plenty of ‘unknown face’ notifications. It wasn’t the odd one, either, but a regular occurrence even when the face captured was decent quality and – to a human – easily recognisable.

Netatmo says this is also normal and that it would rather deliver false positives than fail to send an alert when there’s genuinely a stranger in your home.