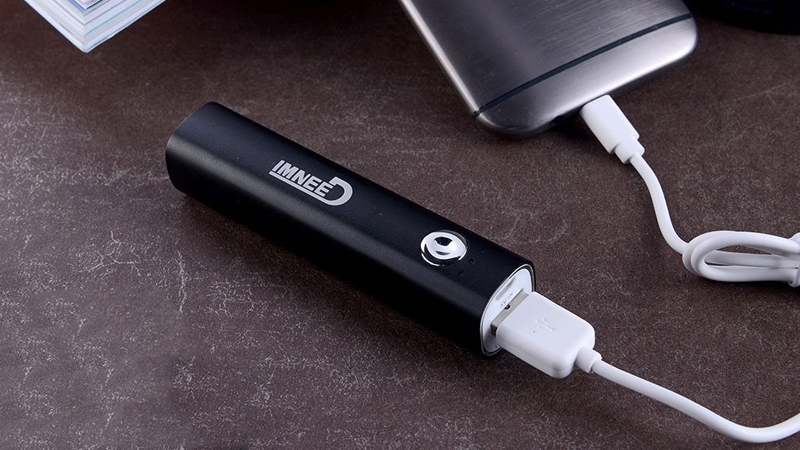 Imneed’s 3200mAh External Battery is a great buy, enabling your phone to keep going all day. Cheaper options are available, but Imneed has done a good job of keeping down size and weight.

Imneed’s 3200mAh External Battery is a pocket-sized emergency charger for your phone. We see how it fares in our Imneed power bank review. Also see:  Best power banks 2018.

Many Chinese-made consumer electronics are sold by multiple retailers who simply slap their own logo on top. It’s something we’ve seen frequently with cheap Bluetooth speakers, and increasingly with power banks. This in itself isn’t a problem, so long as you make sure you’re getting the best deal at the best price.

When we opened the Imneed 3200mAh External Battery, we were caught off guard by how similar it appeared to the £9.99 Intocircuit Power Mini 3000. Both are lipstick-style chargers with an aluminium casing, plastic end caps, a large silver power button, three blue LEDs to denote the amount of power remaining, and a single 5W output and 5W input at one end. But no matter how similar these two devices appear at a first glance, they are different. Also see:  How to improve smartphone battery life.

While the Intocircuit Power Mini has 3000mAh capacity, this Imneed has 3200mAh. With roughly 30 percent of that lost through heat generated and voltage conversion, you’re unlikely to notice the difference, mind. You’ll still get just a single charge for your phone, and potentially not even that if your device has a large battery. We wouldn’t expect to get a full charge for our Samsung Galaxy S6 (2550mAh), for example, although an approximate 90 percent charge is still handy to get us through the day. iPhones typically have smaller-capacity batteries than Android phones, so expect a full charge and then some if you have one of these.

These two lookalike devices also differ in their size and weight. With the Intocircuit measuring 128x80x28mm and weighing in at 118g, it’s pleasing to see Imneed has packed higher capacity into a smaller package, just 96x22x22mm and 77g. Unlike the Intocircuit, no carry case is supplied here, but the Imneed is perfectly proportioned for slipping into a pocket or bag, and its tough metal exterior should keep it quite safe.

But while the aluminium casing looks good, available in black, blue, gold or silver, the rough edges to the plastic end caps make the Imneed External Battery seem cheap – and it isn’t, some £7 more expensive than the Intocircuit. Relative to higher-capacity power banks such as those found in our group test, £16.99 (from Amazon) is quite an outlay for a 3200mAh power bank, although you are partly paying for the increased portability over those devices. Also see:  How to charge your phone or tablet faster.

In functionality, though, Imneed and Intocircuit are evenly matched. The 5W input and 5W output don’t translate to particularly speedy charging for either an attached phone or the power bank itself when it’s time for a refill, and some devices – particularly tablets – may not play happily with it. However, it’s faster than some of the 2.5W-output devices we’ve seen, such as the Pebble SmartStick+, and it may well match the speed of the adaptor supplied with your phone.  Also see: Best MiFi 2016.

In common with many power banks the Imneed features a small LED torch, which is activated with a double-press of the power button. This is small and weak, but you may find it handy in very dark conditions.

This power button is also used to check the amount of power remaining via a trio of blue LEDs, and to trigger charging once you’ve attached your phone. The Imneed doesn’t support advanced features such as auto-on/-off or passthrough charging.

If you’re happy to pay the extra money over the Intocircuit then the Imneed is more portable and has slightly higher capacity. Anker’s £9.99 Astro Mini is another 3200mAh charger that’s very similar in size and weight, and boasts 90 percent energy efficiency and PowerIQ. On the down side, with a 4W input it’ll take longer to refill its own battery, there’s no way to tell how much power remains and there’s no LED torch.